The Directors – an interview with Liz Walker 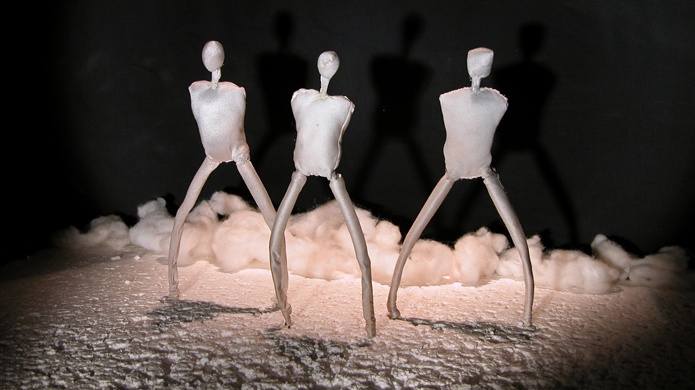 In the second of three interviews ahead of a Puppet Centre masterclass on directing for puppetry, puppeteer turned director Liz Walker of Invisible Thread shares some of the secrets of her trade.

How would you describe the role of a director in a production?

As a deviser and performer as well as director, I think the director has the over-all vision, is the one who is there to balance, coax and guide the creativity and contributions of the chosen performers and artists to the end goal, that is, the performance. I think that it is also the director’s role to create a working environment where performers and artists feel valued and able to contribute openly in the production process.

Does the buck for a show’s success or failure ultimately stop with you?

Generally, the crucial choices are made by the director, but it is also a team effort and the show is ultimately the sum of the team. If a show was a failure it would be magnaminous of the director to take responsibility and, if a success, for the team to have the credit. There is also a question of judging success – is this from audience and critics’ praise or is it that the aim of the show has been fulfilled to the best standard possible?

When does the director’s job begin and end?

As a director/performer the show is constantly under scrutiny. Audience members and other artists are asked for feedback and, if there is an issue that constantly arises, it is addressed, or if there is something that just doesn’t feel right, attempts are made to rectify it. I see the performance as an organic process that strives to reach an ideal of perfection, which is always just unattainable but compulsively aimed for.

As a creator and director of devised work I tend to choose themes that interest me, particularly ones looking at human conditions and experiences, for example isolation, status etc. I then explore symbols, meanings, rituals, movements, objects and characters that might be used to develop a visual story.

Originally I was particularly influenced by the animation films of Jan Svankmajer and the Quay Brothers, the automated sculptural works of Tinguely and outsider art, for example Facteur Chaval. Literary materials that I read for inspiration include Becket, Calvino, Marquez, Bolano, Khams and Eliot. The style of puppets that I use varies depending on character and staging – they range from sewn leather articulated figures to heads on stiff plastic and, in scale, from life-size to miniature.

Is scale something that interests you?

I like the symbolism and visual impact of scale, for example less important characters being smaller; microscopic worlds being projected large; dreams, asides and otherworldliness being smaller or larger to invoke the sense of a different reality.

Do you direct the puppets/objects or the people who manipulate them?

The relationship between the performer and the puppet is interesting and can be directed to suit the type of performance. For example, the way that Neville Tranter from Stuffed Puppet works as a puppeteer, character and reactive presence in his shows is completely different from a puppeteer working on 'War Horse', whose whole energy is complicit with a team effort, to be present but invisible, and concentrated on the manipulation of the horse.

What is similar is the clarity of intent within the performances, which enable the audience to suspend their disbelief and believe in the life of the puppet. In my own work the puppeteer only becomes apparent if something is wrong and the presence but invisibility of the puppeteer has been compromised, or a rationale that has been set-up crossed or broken. This is usually because of the difficulty of being physically present but neutral, especially when leaving a puppet, picking up a puppet, being on stage waiting, or a loss of focus on the puppet.

How involved are you as a director in the design of a production?

As a director and creator of my own work I am involved with all aspect of the design. When working with other artists, for example sound artists, the initial ideas are presented then worked upon in an open, creative debate with lots of trying out before the final decisions are made. I think it is important when working with experts in their own field to acknowledge and respect their artistry and knowledge. Having no musical training, it is often difficult for me to find the language to explain musical concepts or desired soundscapes and progressions, this makes it important to build up a trusting relationship with the composer.

Which of the productions you’ve directed are you most proud of?

Are there any puppetry productions that you’re excited about this year?

I am very excited about the upcoming puppet festivals like Skipton and Suspense – for immersion into the puppetry world and for finding out what is happening.

If you could give a budding puppetry director just one piece of advice, what would it be?

Be pragmatic, stand your ground and give credit to other people’s ideas and opinions. Don’t be afraid of adapting and changing your own decisions, but don’t lose sight of the initial energy, belief in and enthusiasm for a project.

Liz Walker trained as a puppeteer at The Little Angel Theatre. She was joint founder and artistic director of internationally renowned Faulty Optic (1987-2011) – famed for their dark humour, mechanical sets and use of video in shows such as ‘Snuffhouse Dustlouse’ (1990), ‘Tunnel Vision’ (1998) and ‘Dead Wedding’ (2008). Her first show as solo director was ‘Fish, Clay Perspex’ (2010). In 2011 Liz Walker created a new company Invisible Thread – shows include ‘Plucked’ (2011) and ‘Les Hommes Vides’ (2012). Liz Walker has performed throughout the world holds workshops, makes, directs and collaborates with other companies and artists, such as Opera North, Mira Calix, Royal Opera House and, most recently, Breaking Cycles and Z Arts, Manchester.

"I see the performance as an organic process that strives to reach an ideal of perfection, which is always just unattainable but compulsively aimed for."