The Future of the Marionette 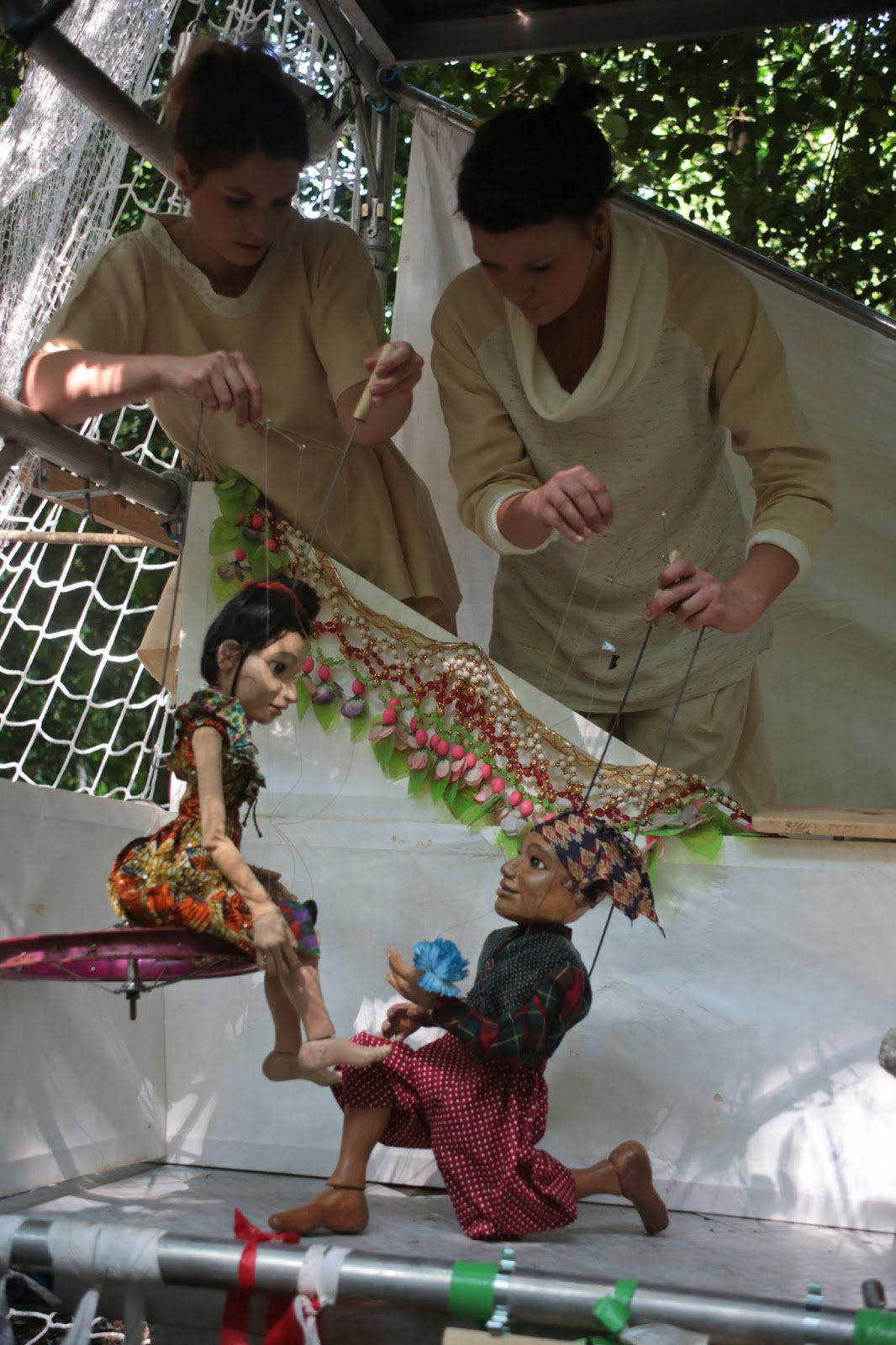 Almost six years ago I had my first taste of operating string puppets. I was training at London School of Puppetry where students work for an intensive month on carving and manipulating marionettes as part of the Postgraduate Diploma in Professional Puppetry. For me, the clichés rang true; it was love at first sight and I was simply enchanted by these puppets. Learning the basics was an incredibly playful process. Each student was tasked with creating a short, solo show that used unconventional staging methods on a tight budget. My marionette performance focused on the puppet character as a frail old man working for a shrewd, modern businesswoman (played by myself, the puppeteer) in an office. The old man's employer bullies him because he is too slow for her cutthroat business style and eventually she brutally cuts his strings to make way for a more efficient employee. It is not uncommon for puppetry to self-reference and it is particularly easy with marionettes to focus on the visual metaphor of slave and master, as one character is quite literally pulling the strings, clearly and directly manipulating the puppet. It certainly wasn’t the most original piece of work ever created, however it was a swift education for me, more of a vertical ascent than a learning curve in the frustrating, backbreaking, and painstaking, yet absolutely magical world of marionette puppetry.

When speaking to marionettists they often chuckle about the horrendous string-tangling episodes of their careers and speak of the complications of these puppets – head-wobbling, creating an illusion of weight, trying to “perfect the walk” and so on. Despite all of these complications, the end result can be extraordinary. So why is marionette theatre so scarce in Britain nowadays? There are a few dedicated performance venues – the gorgeous Puppet Barge, Harlequin Theatre in North Wales, Little Angel Theatre with its double bridge and yes there are some fantastic performers out there creating new marionette theatre – String Theatre Marionettes, Stephen Mottram’s Animata and Mirth and Misery to name a few. However, in recent years, it is only the spectacular giant marionettes at one-off events that have captured the attention of the press, and street performers with string puppets appear all over YouTube, yet marionettes have failed to jump on the Puppetry Renaissance bandwagon! Whether you put this down to the many years it takes to learn to operate one of these complex puppets, their staging requirements or something else entirely, I am determined to start a dialogue on this subject.

I recently became aware that Punch shows in the 18th Century were performed using marionettes, not the glove puppet versions that we are familiar with today. The expense of constructing them, specifics of staging demands and transportation issues led to the puppet troupes eventually giving way to the single performer, glove puppet booth shows.  This idea of seeking an easier option,(gloves as opposed to strings) could be one of the primary factors contributing to the decline in popularity of marionettesin Britain over the last few centuries.

I did some research into training opportunities in the UK and my search was less than fruitful. There are a few fabulous carving courses on offer that feature some practical training at the end of the course;perhaps a bit of an add-on with the assumption that you may be able to go ahead and self-teach? The ability to carve your own puppet and understand the mechanics behind it undoubtedly gives you a greater understanding of its physical make-up and the science of its movement. However it would be incredibly beneficial to aspiring marionettists to see more courses with a primary focus on marionette manipulation. Although many hours of intensive practice are necessary to become a proficient marionettist, courses offering an insight into the basics of operation, and the ability to learn as part of a group would be invaluable when starting out or improving, so individuals are not doomed to spending weeks cooped up on their own trying to work out if using a mirror or a camera is actually a help or a hindrance! There seems to be a Catch 22 situation at play whereby there is little demand for marionette training because many performers and puppeteers don’t consider it a financially viable art form, or simply want a faster route into puppetry; yet those who do aspire to manipulate marionettes are struggling to find opportunities to train because of the lack of the demand. Mainstream theatres and companies are proving that actors can be trained during intensive rehearsal periods to operate Bunraku-style puppets or learn the specific style of a company yet I have not met an actor who has ever just picked up and used a marionette in a show.

Eighteen months ago I began pursuing the idea of devising my own solo marionette show. I intended to return to these puppets that I had so enjoyed whilst studying and torefine my skills, but also have my own show to tour giving me the freedom to take the creative lead on a project:something I had not done for several years. I was amazed by many of the negative comments I encountered when telling people I wanted to work with marionettes. It seemed generally as though marionettes were trapped in the past and the attitudes surrounding them were confused. During my Research & Development phase, I learned that in recent years Arts Council England have funded at least two projects that aimed to preserve the heritage of the marionette. Although a very worthy cause, it is worth thinking about what might happen if we merely ‘preserve’ the marionette and stop making progressive work. Are we simply consigning them to history and preventing growth? It is often all too easy to blame the Arts Council or other  funding bodies for not supporting our work, but if we are not submitting strong applications to use marionettes, whether in Applied settings or for performances, then does the responsibility actually lie with the puppetry community?

How can we raise awareness of this endangered art form and help to bring marionettes firmly into the twenty-first century? By making work of course! The only way of shaking off negative attitudes is to support and nurture young talent and increase opportunities to learn. To return to the Punch analogy, if we are primarily concerned with taking easier, cheaper options, (often a necessity rather than a choice of course), then I do believe that marionettes will continue their decline and become museum-pieces. However if we are willing to challenge ourselves and push the boundaries of what has become accepted as the norm for puppets that have made the leap into the mainstream UK theatre scene, then perhaps we will be able to enjoy the beauty of string manipulation for a long time yet.

"Are we simply consigning the marionette to history and preventing its growth?"