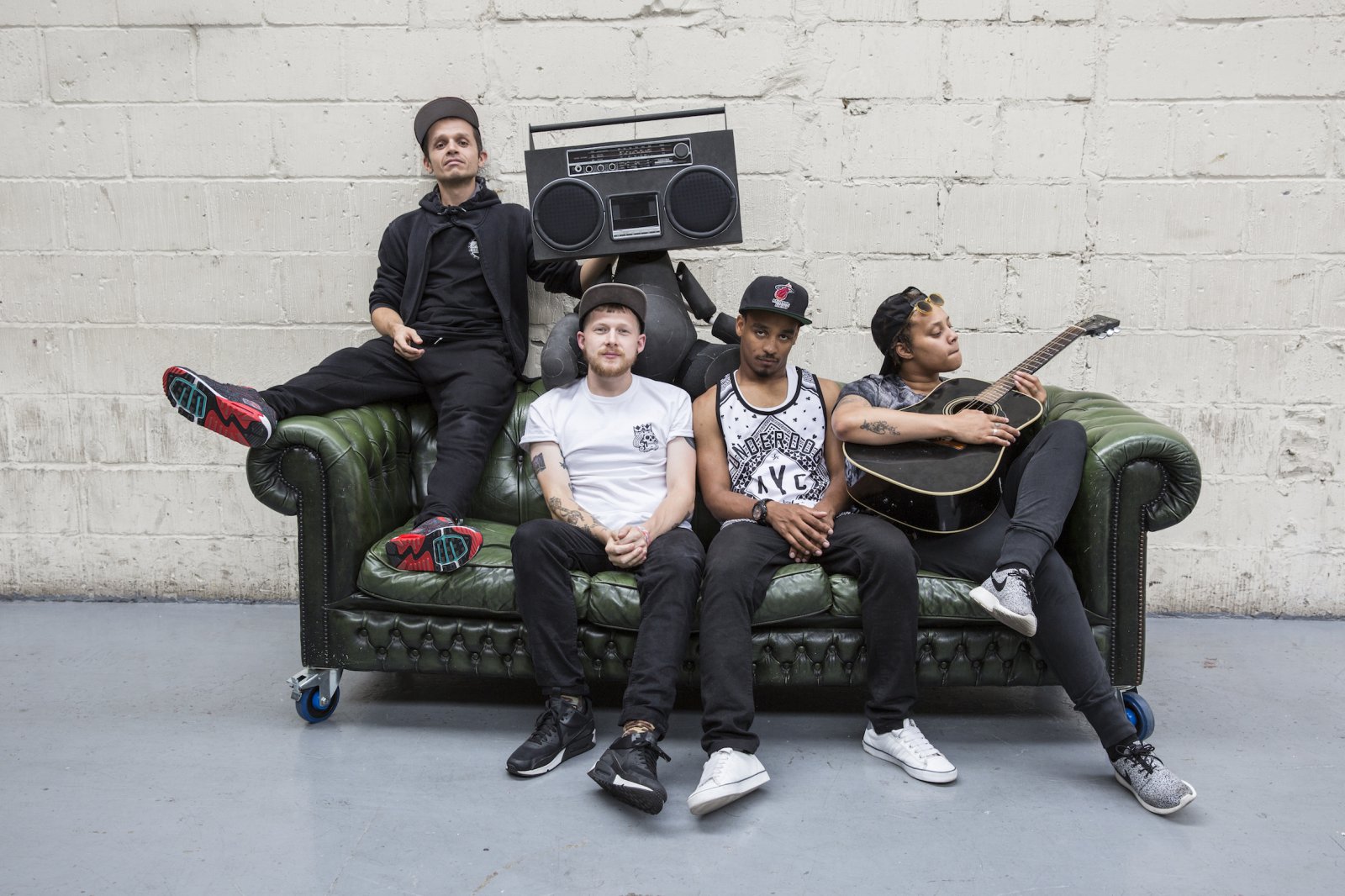 The Broke 'N' Beat Collective is a new show for audiences aged 13+, from 20 Stories High and Theatre-Rites, currently touring. Keith Saha is one of the co-directors of this show (alongside Theatre-Rites' Sue Buckmaster) and co-Artistic Director of 20 Stories High, a Liverpool-based young people's theatre company. Mohsen Nouri is a puppeteer working in theatre, film and television, he is a regular collaborator with Theatre-Rites and is part of theatre company Rouge 28.

Talk to me about the process of making Broke 'N' Beats:

Keith: "and as always it was a great privilege. Sue and I decided to work together again this time with Theatre-Rites."

Keith and Sue have worked together on 'Melody Loses Her Mojo', but Sue acknowledged that even though they were exploring the relationship between hip-hop and puppetry - the puppets in these examples were always serving the actors in the piece. That's why The Broke Collective began by asking how they could make, what Keith called "a complete mash-up". To do this, they decided there would be no actors, instead, only puppets who would be each characters.

So it was simple Keith said, "we needed to co-direct it". Keith has always been a big fan of Theatre-Rites and was excited at the prospect of collaboration, although he admitted it would be an interesting result because, 'Theatre-Rites do not use many words, and 20 Stories High does!' So although at first there was uncertainty about how these two companies would create together, it felt very natural because this concept was a shared vision from the beginning. 'We both have our own areas that we're experts in,' Keith acknowledged, 'and sometimes' he laughs, 'I fight to keep the visuals and Sue fights to keep some words! There's certainly an overlap and we are both learning from each other.'

Mohsen: 'Keith and Sue have worked very hard to give the time and focus necessary for each element. Nothing is an afterthought - each aspect stands up by itself and together - merged and integrated together'.

It seems to work like this throughout the devising process and with the other creatives too. Everyone knows what they are doing in their own areas. The main premise behind the show is that each of the elements of hip hop has a different puppet representation. In case like me, you did not know, the main elements of hip hop are: the music (beat boxing), movement, words, artistic aesthetic (graffiti and urban art), and consciousness and the self (which Keith defines as being political and asking questions). Mohsen tells me that as well as co-directing, Keith has almost taken on the role of a musical director. He also helps to write the lyrics, not only to get the sounds right, but for the emotions and thoughts behind the words too.

Mohsen: Music must also have emotion and a psychology behind it which can be read by an audience.

Keith: We're on a mission to get young people involved in puppetry on their own terms and fusing it with different art forms.

Mohsen tells me that is exactly what the video does, fuses together each of the elements, and challenges what the audience thinks they already know about them. The hope is that it might appeal to an audience that might not have encountered puppetry before, perhaps by introducing them to it via hip hop music.

When you grew up did you see similar issues to the ones you present in this show?

Keith: I grew up in Birkenhead, Liverpool, in the 1970s. At the time it was a real area of deprivation, it was under-resourced and financially broke. It felt quite familiar to some of the things young people are facing now with current austerity measures. Sometimes we take a step back and things seem to get better for health, welfare, education, etc - and then the statics and gaps between the wealthy and the poor seem to continually prove otherwise. There's a surprising amount of hidden poverty in the UK, we're one of wealthiest countries in Europe, and yet we have one of the highest levels of child poverty.

Mohsen: I grew up on a central London council estate during the 80s. A lot of people were having a tough time with poverty and other political happenings that were problematic. Now, I think we find ourselves reliving these times a little all over the country. Many of the issues that the show will discuss and express are present in many lives, especially the lives of young people.

Is it fair to say that people are acknowledging that this is really a problem at the moment?

Keith: Our company is 10 years old. When we began there were many more companies like us and many more provisions too. But 10 years later the landscape is very different, with not as many opportunities available throughout the UK. 20 Stories High is not just an arts organisation where people can come and play. Now what we see is that people come to us for advice; housing, social engagement, employment - they come to us for help and support as well our workshops and theatre. That's really the difference the arts makes.

Moshen, did you train as a puppeteer?

"In a round-about sort of way I did," Mohsen explained he was introduced to puppetry through the Muppets but he then became interested in Anamatronics, film and TV special effects. Later he went on to study Prop Making at The Royal Central School of Speech and Drama.

Mohsen: The tutors I had (Mark Pitman and Ikloosha Malara of Garlic Theatre, and Shaun Myatt) really broadened my horizons by introducing me to object manipulation. It was the first time that I realised a puppet could be so many other things. So I thought if I'm going to be making puppets, I should at least know about how they are manipulated. I had no intention of being a puppeteer, but it came naturally to my hands and then I began to get positive feedback. Once I graduated I was left in a quandry, I didn't know whether to be a puppeteer, or prop maker.

But then our founding member Penny Francis called to tell him that The Little Angel Theatre were looking for volunteers...

Mohsen: Six weeks turned into six months and I worked on many marionette productions with them. It was a simply magical experience - and so eventful for me - I learnt and developed so much in a theatre that I had first been in when I was five years old. It's such a coincidence that things come round in a circle like that.

Mohsen: I think it is a very good time for puppetry. It is fertile ground because the spot light is on it. Audiences want to see more, and theatres and directors are looking at puppetry in a different way. As well as that, we have many puppetry companies and practitioners being innovative and making incredible work. I hope that the puppetry community will grasp this opportunity and make something of it. I hope the momentum will be kept going and that this period will strengthen the puppetry community.

Finally what's the message you're hoping that will come from this piece?

Mohsen: I think, there can be hard times, but hard times won't break us - there can be hope. All we need to do is hear each other's stories, and take action. I'd like the audience to leave feeling uplifted, by the story, the experience and the gig itself.

Keith: '20 Stories High is ultimately a mouth piece, and we're here to tell and represent those under represented stories, and get them on the stage.'

Other artists in this show as well as Mohsen are, beat-boxer Hobbit, b-boy LoGisTics, and singer/rapper Elektric who together form The Broke ‘N’ Beat Collective.  They've already had some great reviews, and we'll be seeing this show at the end of its run at The Albany - if you see it before us, let us know what you think.

Keith:'20 Stories High is ultimately a mouth piece, and we're here to tell and represent those under represented stories, and get them on the stage.'

You can catch The Broke 'N' Beat Collective as they tour throughout the UK between February and April this year. You can find the dates by clicking here.