Celebrating 40 | Q & A with Mervyn Millar 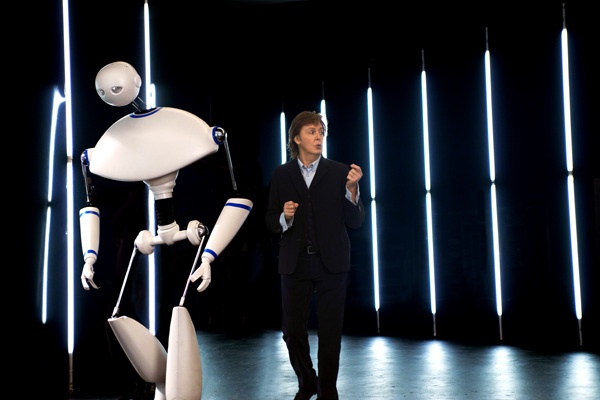 The Puppet Centre is 40 years old this year. To celebrate we're catching up with some of the people who have won Puppet Centre bursaries to find out how their eclectic careers have developed. Throughout 2014 we will publish Q&As with some of the UK's finest puppeteers. From War Horse to Sir Paul McCartney, Mervyn Millar is used to working with icons. Here he reveals that pliers, sharp pencils and deodorant are the keys to his success.

Describe the how, when and what of your Puppet Centre bursary

In 2004 I was making interesting and experimental work with and without puppets at venues like BAC, the Finborough and the Barge House and for the NT Education department. I channelled The Puppet Centre Bursary in two directions: one was to meet possible collaborators for my own work; the other was to travel and work with Handspring, who I had met three years’ previously and with whose work my own shared many connections. The result was an enriching working relationship that has lasted a decade, including, in 'War Horse', one of the most exciting puppetry experiments of our time. So the Puppet Centre bursary changed a lot for me (and one or two other people…)

What are your favourite memories from that period?

Recognising that the challenges facing young and established artists were the same – only the stakes (money, reputation) changed.
Seeing theatre makers in Africa who approached the work from different perspectives with shared aims in mind.
Standing by the coast in South Africa pinching myself that this might actually be happening.
Tom Morris visiting us in South Africa and having the germs of the idea that led to 'War Horse'.
Meeting artists in cafes all over London and listening to them talk about their work.

How about the challenges?

The bursary is explicitly about trying to help emerging artists hold their heads up in more ‘exalted’ company – and it’s important to look both ways when you’re at the crossroads. The big projects I’ve worked on, then and since, have a lot invested in them – both artistically in terms of established reputations, and financially – which can create burdens and tensions. The early part of one’s career, and smaller projects, in contrast feel compromised precisely because there isn’t money: the struggles with logistics, and the feeling that the world isn’t seeing what you’re making. But the work that’s made by young artists is so pure and strong. When I think about the bursary now I remember working in both worlds – and it reminds me to try and remember how to let the artistic impulse drive all of the projects.

How has winning the bursary shaped and influenced your work and career since then?

Obviously the association and collaboration with Handspring has made a huge difference to how my work has developed. The language of puppetry in 'War Horse' (itself a development of Handspring’s previous work) is so embedded in my practice now that it’s equally exciting to teach in that way, or to explore radical departures from it. Just getting the bursary – in competition with some really wonderful puppeteers – has a huge impact on one’s confidence. Sue Buckmaster, who was one of my mentors on the bursary, was always very good at reminding me that it’s important to make space for one’s own work as well as serve the collaboration.

What could you never live without as a puppeteer?

As a puppet maker – pliers.
As a designer and director – a sharp pencil.
As a puppeteer – deodorant.

If you ruled the arts world, what would you change? (just one thing!)

I’d like to see spaces encouraged to foster interdisciplinary work. I find myself so much more exhilarated by art in which different disciplines are allowed to respond to one another, than watching even excellence within traditions. It’s also partly to do with the establishment as expressed in the media – expert critics and curators prefer to defend their citadels than risk making a fool of themselves misunderstanding each other’s fields of expertise. But puzzling over what could happen on stage alongside a painter, a poet or a choreographer always feels more vital than striving for well-made dramaturgy in a tradition; and shows that dissolve those boundaries make for thrilling, memorable events.

What’s your guilty pleasure when it comes to culture?

Not that guilty, but I spend too much time listening to jazz. Some of it is probably quite cool but a lot of it really isn’t.

What keeps you awake at night?

Everything. Obligations unfulfilled, emails unreplied to, mechanisms nearly-functioning... and my baby son, who is very committed to waking us up as regularly as he can.

Describe your life-in-puppetry in five words or less.

What’s your birthday wish for the Puppet Centre Trust?

I’m the same age as the Puppet Centre! The Puppet Centre is always focused on helping puppeteers now, but I love how it quietly and calmly reminds one to cherish the history and traditions of this ancient art form even when our eyes are focused on cresting its future. The Puppet Centre sometimes flies under the radar but its existence is crucial. I wish it could be given a space again – to be a centre where puppeteers can meet and read and disagree. It might not be its most vital function right now – which is probably as a virtual space where connections can be made and our art championed, and as a creator of events that push the community forwards. I’ve always benefited from other puppeteers – so many brilliant and generous and inspiring creative people. It’s always a delight to see them and it invigorates all our work to see what each other are doing.

And, finally, here’s your chance to plug whatever you’re working on at the moment.

Through my company Significant Object, I’m directing the puppetry in James II – one of the three ‘James Plays’ by Rona Munro which are the first collaboration between the National Theatres of Great Britain and Scotland. They’ll be on at the Edinburgh International Festival and then at the National Theatre’s Olivier in London – it’ll be a great pleasure to be back there again.

We’ve also made a puppet for Sir Paul McCartney. We created Newman for Sir Paul and he appears in the video for Appreciate. It is absolutely jaw-dropping to watch one of the most iconic musicians of our time pick up a guitar and strum out a blues or one of his incredible back catalogue. Newman might also appear in forthcoming live dates with Paul’s band.

Our puppetry design and direction for Stiller at the Residenz theatre in Munich is still running, and we’re currently designing animals and monsters for a new project with the Schauspielhaus in Zürich – an adaptation of Astrid Lindgren’s thrilling and heartbreaking Die Brüder Löwenherz.

"Puzzling over what could happen on stage alongside a painter, a poet or a choreographer always feels more vital than striving for well-made dramaturgy in a tradition; and shows that dissolve those boundaries make for thrilling, memorable events."