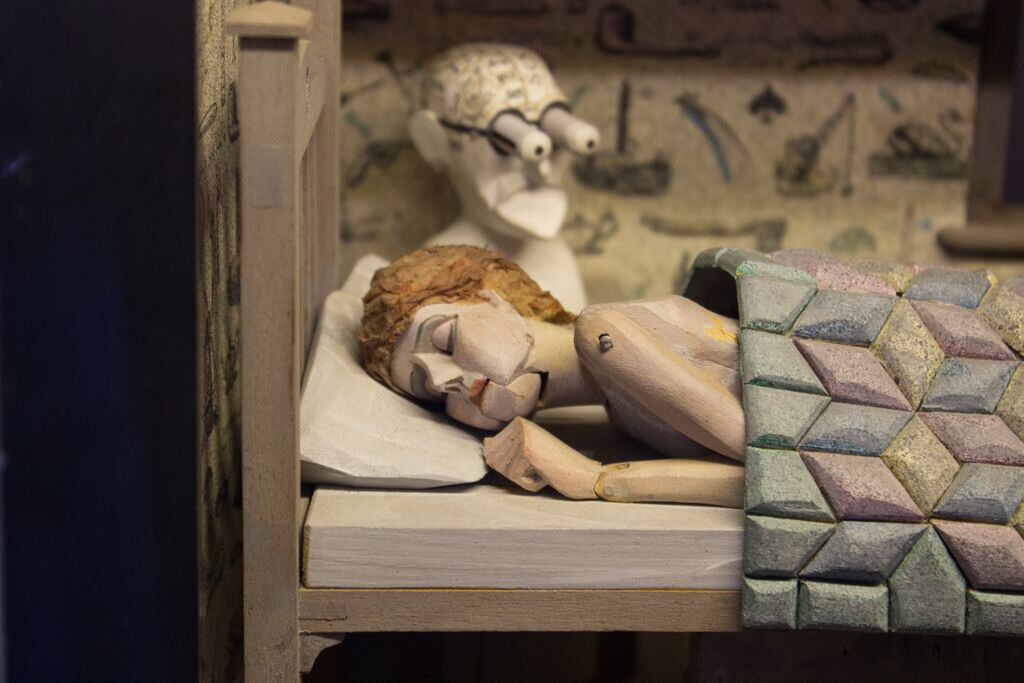 Novelty Automation is tucked away on a quiet backstreet in Holborn, minutes away from the hustle and bustle of central London and Holborn’s learned Inns of Court. While it appears a rather incongruous location for a collection of arcade slot machines, the arcade’s owner and creator, Tim Hunkin, believes it is very appropriate. It was here that the great cartoonists and satirists of the Enlightenment, such as William Hogarth, displayed and sold their work in shops similar to the one Novelty Automation now inhabits. Like Hogarth and his contemporaries, Hunchkin’s creations delight in poking fun at the vagaries of modern life and society, ranging from the gently whimsical to the openly acerbic.

When I arrive, I find Hunchkin with his head buried in the inner workings of his latest machine 'The Small Hadron Collider'. Like several of his creations, this is an adaptation of a pre-existing arcade machine, in this case an antique Pachinko machine. Pachinko is a Japanese game that resembles a cross between pinball and bagatelle, frequently used for covert gambling. Hunkin has heavily adapted this particular machine, so when I launch the small metal balls into it I am rewarded with randomised quasi-scientific pronouncements, rather than more balls (the currency of Pachinko). After several more tries I hit the jackpot, wining a Nobel Prize, presented to me by one of the shop’s staff.

Hunkin is a self-taught automata maker. He created his first machine, 'The Chiropodist', in the 1980s for Cabaret Mechanical Theatre, then based in Covent Garden. Even as a child he was experimenting with mechanical constructions, creating mechanisms out of cardboard and sellotape before moving on to electrical servos and timers. With an engineering degree behind him, Hunkin started using these modern electrical components to achieve effects that traditionally required intricate clockwork mechanisms. 'The Chiropodist' was very popular and proved an unlikely financial success, spurring Hunchkin to devote more of his time to making slot machines.

Following the closure of Cabaret Mechanical Theatre in 2000, Hunkin relocated his machines to the newly rebuilt Southwold pier. Originally this was just somewhere to store them but the attraction soon turned a profit. Novelty Automation is his latest venture and one he hopes, in time, will follow the success of the Southwold arcade and more importantly stop him getting bored in retirement.

Hunkin certainly appears to be having a lot of fun with the new shop. There are currently fourteen of his machines on display and three more by guest automata makers, including the wonderful Paul Spooner. The display will be changed every few months to encourage repeat visits. As I wander through the arcade, trying his creations, Hunkin tells me he loves making automata both because he enjoys the struggle of solving practical problems and, perhaps more importantly, seeing the reactions of those who use them. Indeed, during my visit I find it is just as fun to watch others play the machines and see their surprise, delight and occasional discomfort, as it is playing them myself.

With my newly acquired Noble Prize, I move on to 'The Holiday'. This is another adaption of a pre-existing machine (an Atari Space Harrier simulator from the 1980s). The black faux leather pilot’s seat has gone, replaced by diminutive armchair with a seat belt facing a small television that instructs you to strap in. Safely and comfortably installed, I am whisked away on a compacted simulation of a package holiday. As a stop motion animation plays out on the television before me, the chair bucks and turns through a crowded flight and a hair-raising bus journey finally bringing me to my resort and a quiet beach, replete with the warming glow of the sun.

Not all of Hunchkin’s machines are so relaxing. 'Autofrisk’s' inflated rubber gloves thoroughly and, in some places, uncomfortably, poke, prod and pat you for illicit goods. While others, such as 'Divorce', 'Is it Art?' and 'Money Laundering' (specially made for the Holborn arcade), offer slightly more cutting takes on modern life. Their social commentary suggests a more serious purpose in Hunkin’s work. However, he does not expand upon this. He tell me he prefers to just see them as novelty entertainment. This they certainly are and I can highly recommend taking a group of friends to go and whittle away an afternoon ‘playing the slots’.

"Like Hogarth and his contemporaries, Hunkin’s creations delight in poking fun at the vagaries of modern life and society, ranging from the gently whimsical to the openly acerbic."