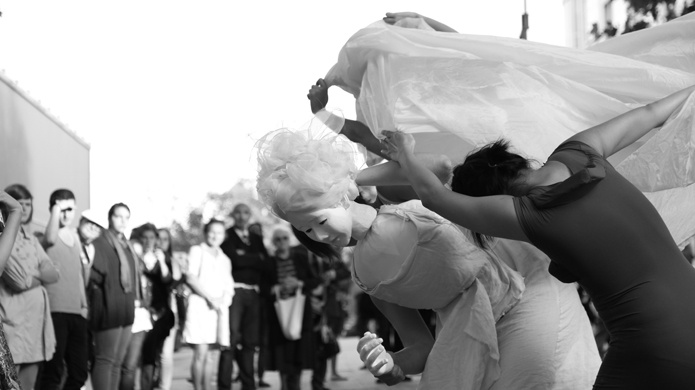 Photographer Jemima Yong specialises in documenting live performance. Here she discusses her fascination with puppetry, especially the relationship between puppet and puppeteer, with fellow Central School of Speech and Drama alumni Joanna Hruby.

What made you gravitate towards the puppetry department so frequently during your time as a Performance Arts student at Central School of Speech and Drama?

Initially it was the sheer magic of living, breathing three-dimensional beings that seemed to have stepped out of my imagination. Specifically, it was the final moment of Blind Summit Theatre’s 'Low Life' – the lights were going down and the bunraku puppet was left by all of its puppeteers: sitting, upright, alone, at the table, and just before the theatre went dark, he turned his head and his eyes caught the light, a final sparkle. Magic. I was enticed by the gag really; the invisible manipulator. And when I began to learn more about the form, my interest shifted towards the extraordinary focus, attention, intuition and intelligence the puppeteer embodies.

My work with the puppetry department was very much led by my interest, as a performance maker myself, in the body's interaction with material. The puppetry students had access to a material vocabulary that gave them so much more scope to create performance outside of themselves. This language was what I craved and felt I was lacking. I admired, and always have, the craft and ability to make, to sketch, to sculpt. Such tangible skills the puppeteers had! I loved being around it.

As a photographer, I enjoyed two aspects of working with puppeteers, I always find the documentation of the making process very satisfying as I'm sure is the same for the puppeteer. But the images that arrest me most are the ones that capture the ever-changing relationship between the manipulator and the puppet.

Your photos seem to be the tip of the iceberg – it's the vast stories that live beyond them which seem to matter to you. In that way your photographs remind me of the potency of a puppet.

Manual Vason recently said in passing how discussions on photography eventually always lead to the topic of death. I never really thought about it until then, but it has been emergent since so I find it interesting what you’re saying about distilling life.

What I aim to do with my performance photography is capture essence, not replicate performance, as far as I’m concerned that’s impossible and the pursuit is uninteresting. The photograph is one of the few things that remain after a show has been finished (the ever ephemeral nature of our work!). The photo is created to evoke a fleeting sense, an essence of what might have taken place.

When I shoot puppetry performances, I feel like focusing on the puppet (as you often would in the live event) is unproductive because the life of the puppet is only ‘real’ in motion. Therefore to suggest movement, one has to identify the puppet’s relationship to its manipulator. So for me, the images are always about the relationship between the bodies. Not just about isolating the puppet. A photograph cannot capture a puppet’s life. My images do not ask of the viewer to suspend disbelief. Its focus here is on something different.

When working with the medium of puppetry, as a photographer, do you see yourself as another kind of animator or manipulator? Or is there a different role that you fulfill?

As a photographer I always feel like my role is to point. To tell people where to look and through the composition of the photograph, intrinsically you dictate a certain degree of how they look. I suppose in that sense I animate gaze, I manipulate gaze. I don't manipulate the puppet.

You worked on a number of projects with Nenagh Watson – could you describe how her area of research, based on Ephemeral Animation, linked with your ideas and interests as a photographer?

I met Nenagh whilst studying at Central. She was the visiting lecturer on a puppetry performance art crossover module. There were a couple of them in the first part of the degree; very formative those were. Over the years, our relationship has developed from being solely situated in an educational context to that of collaborators and friends. It is one of the most important and meaningful relationships I’ve formed from my Central experience.

When photographing Nenagh’s work, I often adopt the role of interpreter, the character maker; projecting an ‘artful’ gaze through the lens. The beginnings of the work were very much devoid of the human ego or in active acknowledgement of it. So much of Nenagh's work I feel locates itself within puppetry and fine/performance art. Her work is a generous platform for interpretation.

As a photographer, I think it’s about choosing where to locate that performative action within space, sometimes a dark void, sometimes the urban landscape. Her work is so thoroughly considered and deliberate, which manifests from a very specific balance of having control, releasing control and awareness of that shift in power. This is something that I relate to as a maker and photographer.

Nenagh, Bella and I travelled to Russia together to perform Concertina for the Gods. And recently myself and Nenagh collaborated on a photo book – a document from her performance of 'Conversation with an Umbrella'. That was good to do. We share similar sensibilities.

Read Joanna Hruby's account of undertaking the most unusual degree in the world.