This Is Puppetry: An Interview with Iestyn Evans 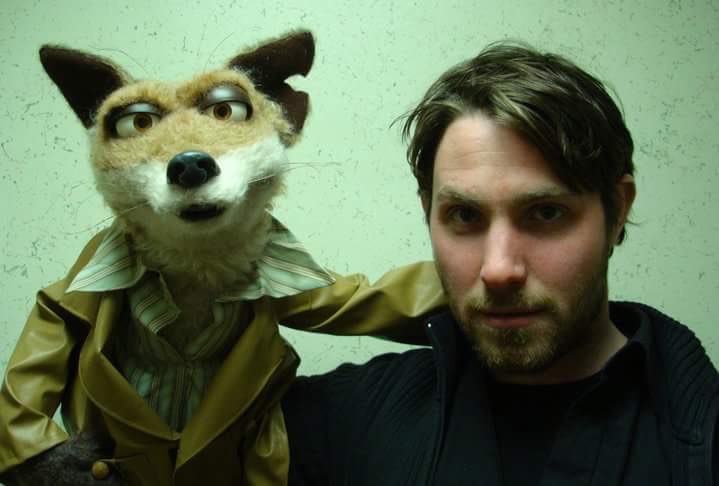 As part of Puppet Centre's This Is Puppetry campaign we'll be interviewing puppeteers from across the range of puppet activity, from opera to film, and from community workshops to the West End and Broadway. This month, as we celebrate Puppets in Film, we chat to Iestyn Evans.

Iestyn's film credits include Star Wars: The Force Awakens. He has also puppeteered on stage and TV as well as the The London Olympics Opening Ceremony. He's also part of Talk to the Hand, who created puppets for the TV hit Mongrels.

I work as a freelance puppeteer, puppet designer and puppet director in film and television, and with my company Talk to the Hand have been producing on screen puppets and puppetry since 2005.

2) Why do puppets work well in film?

Hmmm...can I firstly say that puppets don't automatically work well on film. Just as you can get bad acting in film, you can also get bad puppetry! However, when it does work well in film, I think it's for the same reason that puppetry works anywhere. The skills and expertise of the puppet team (from designers to builders to puppeteers) combine in such a way that, despite the fact that you know something isn't real, you can't help responding to it, and feeling for it, as if it was real. The skill of other departments is vital too...Direction, cinematography, as well as sound, lighting and art departments (to name but a few) all contribute to an audience being able to suspend their disbelief. It's actually a very similar process to why we are prepared to believe that Meryl Streep is the character she is playing, even though we really know she is a a famous actor. Many puppet creatures in film look realistic, which can be wonderful, but it actually takes care to make an audience believe in something, no matter how realistic it looks. And even if something doesn't look realistic, like Elmo performed by Kevin Clash in the film Elmo in Grouchland for example, if the puppeteer and others involved take this care, we still believe in and care for the character. It's these things we can do to make the audience care for a character, even when they know it isn't real, that I find magical, and I hope I'll be exploring them for the rest of my career.

3) What originally led you to use puppets? When?

I loved puppetry on television when I was growing up, particularly Jim Henson's Fraggle Rock. My Mum would also take me to Norwich puppet theatre, which I was in awe of. At some point I decided I wanted to be a puppeteer, probably before I even knew what the job really was. I made puppets as a hobby, and acted in youth theatre, and eventually the two collided and I ended up building puppets and performing them in shows. The first was the Lion Aslan in a Youth Theatre production of The Lion, the Witch and the Wardrobe. At some point I managed to persuade people to pay me to do this, and I've been lucky enough to be doing it ever since.

4) What is your favourite puppet in film?

Probably "The Plant" called Audrey II in the film version of Little Shop of Horrors released in 1986. It still stands up as an incredible example of Puppetry in film today. Actually portrayed by a series of puppets getting increasingly larger as it grows, it completely debunks the myth that giant puppets can't give a nuanced performance (which used to be believed). The puppets are an incredible design, both in terms of puppetry technique, mechanics, fabrication (headed by muppet designer Sherry Amott) and appearance. Filmed at Pinewood Studios, most of the puppetry team were based in the UK, including Sue Dacre, who was one of the principle puppeteers on "Audrey II". The team of puppeteers working on the film rehearsed for weeks, demonstrating that there really are no shortcuts to creating this type of performance. And they used every trick in the book, including undercranking the camera and having actors Ellen Greene and Rick Moranis mime their movements slowly, and then speeding up the footage. As a result it is completely alive, the lip synch is spot on, and more than anything is a really charismatic and sassy villain.

Recently we were making a short film, and I was performing a giant creature alongside a team of 4 other puppeteers, Emily Morus Jones, Sue Beattie, Beccy Henderson and Lewis McCabe. This large monster was befriended by a small boy, and they had several scenes together. In our first scene together the boy was a bit overwhelmed I think, and just went to sleep on the character's tummy! We needed him to interact more with the creature, so as I was performing the mouth, I started talking to him. All the other puppeteers quickly got on board with the idea, and started moving his hands, eyes and ears in response to what I was saying. All of a sudden the child sat up and started interacting with the monster as if it was real, and they quite happily chatted to one another (seeing who could open their mouth wider and comparing the size of their hands) for the next 5 minutes. It was magical, and the resulting footage was some of the work I'm most proud of. That 5 puppeteers can work together to bring one large character to life in a completely improvised scene, interacting with a young child, is incredible to me, and one of the reasons I love my job.

Watch this space for further interviews as part of our This Is Puppetry campaign - and if you liked this why not tell us on social media? @PuppetCentre on facebook or on twitter @PuppetCentre