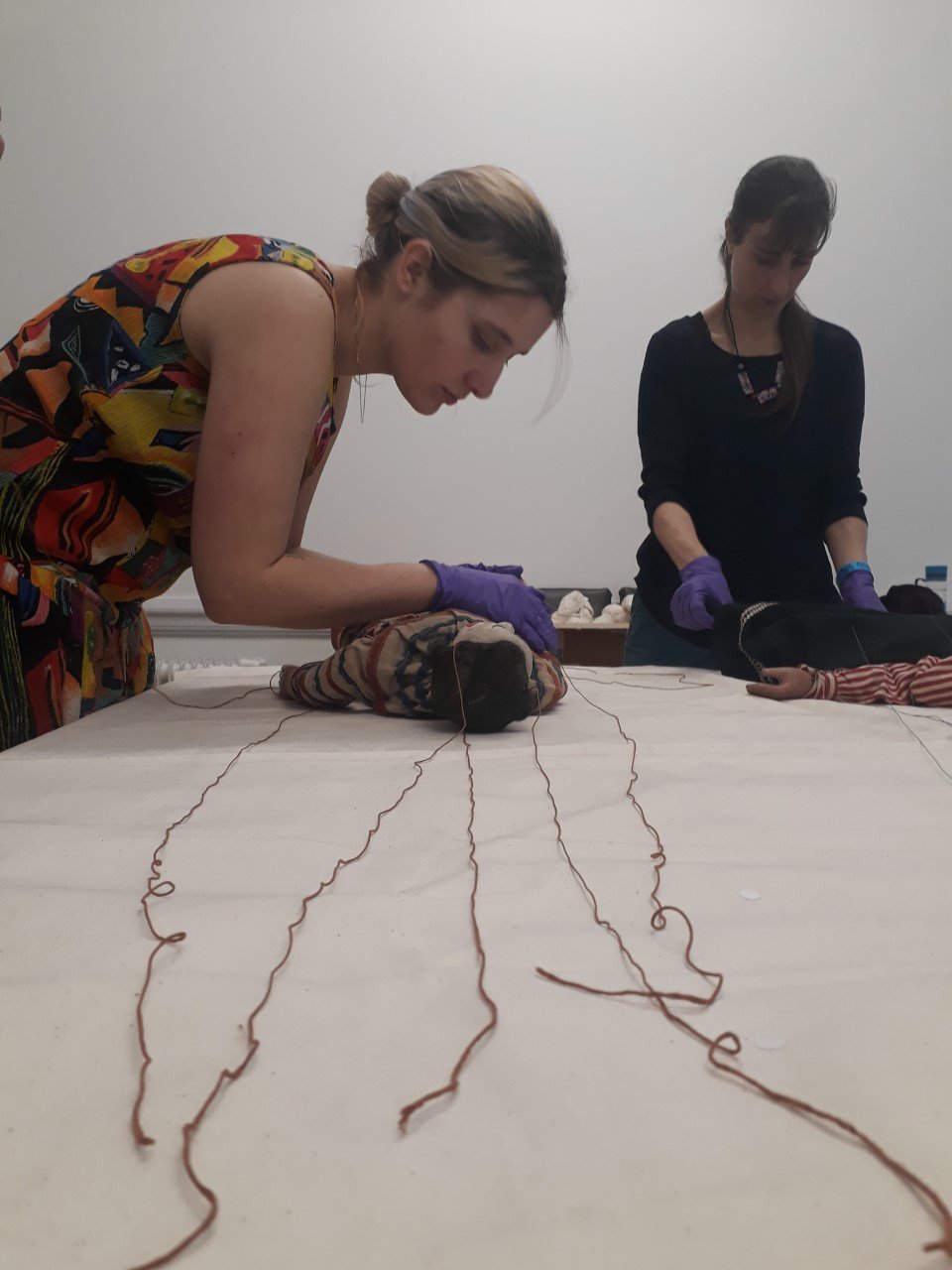 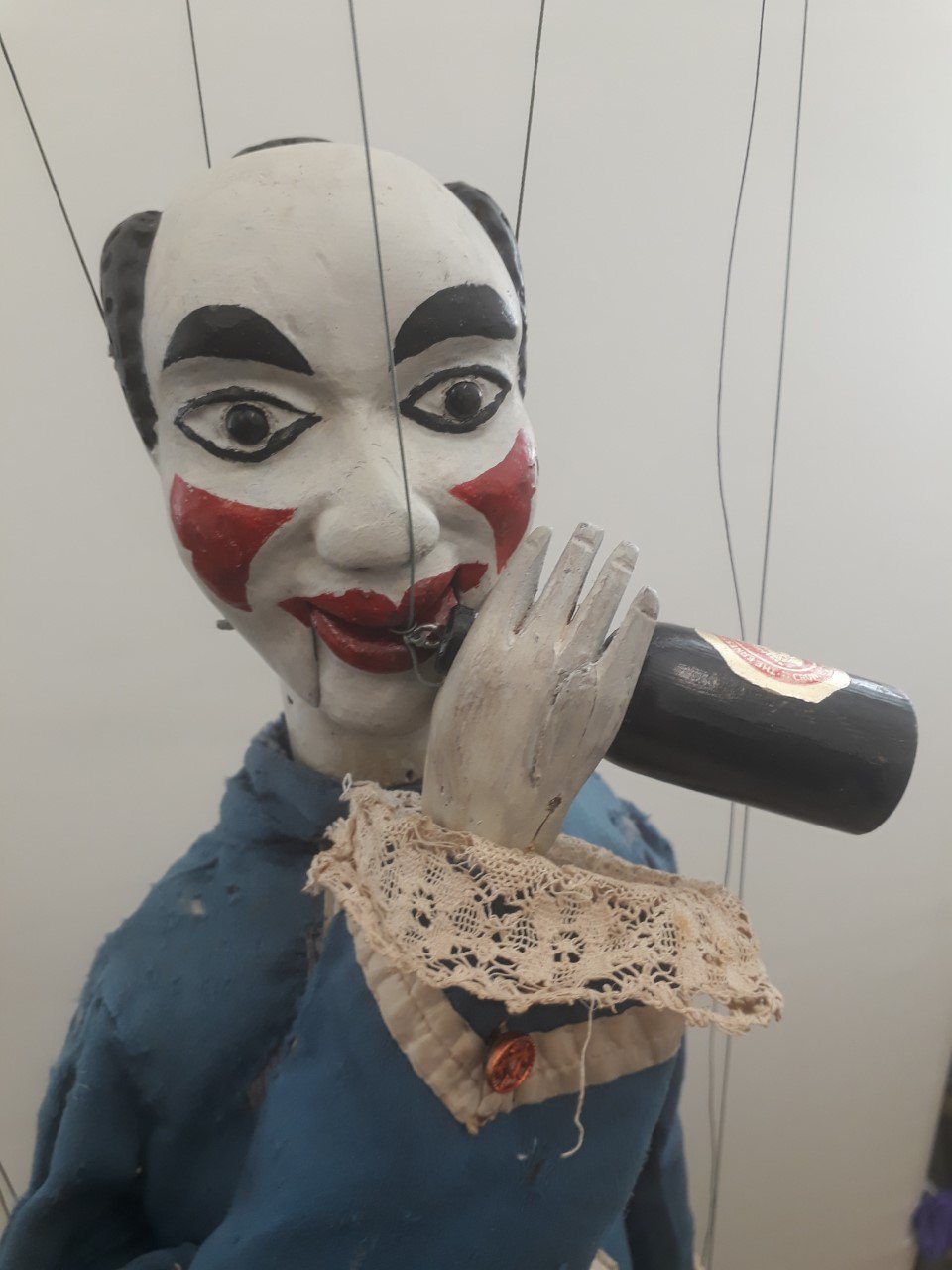 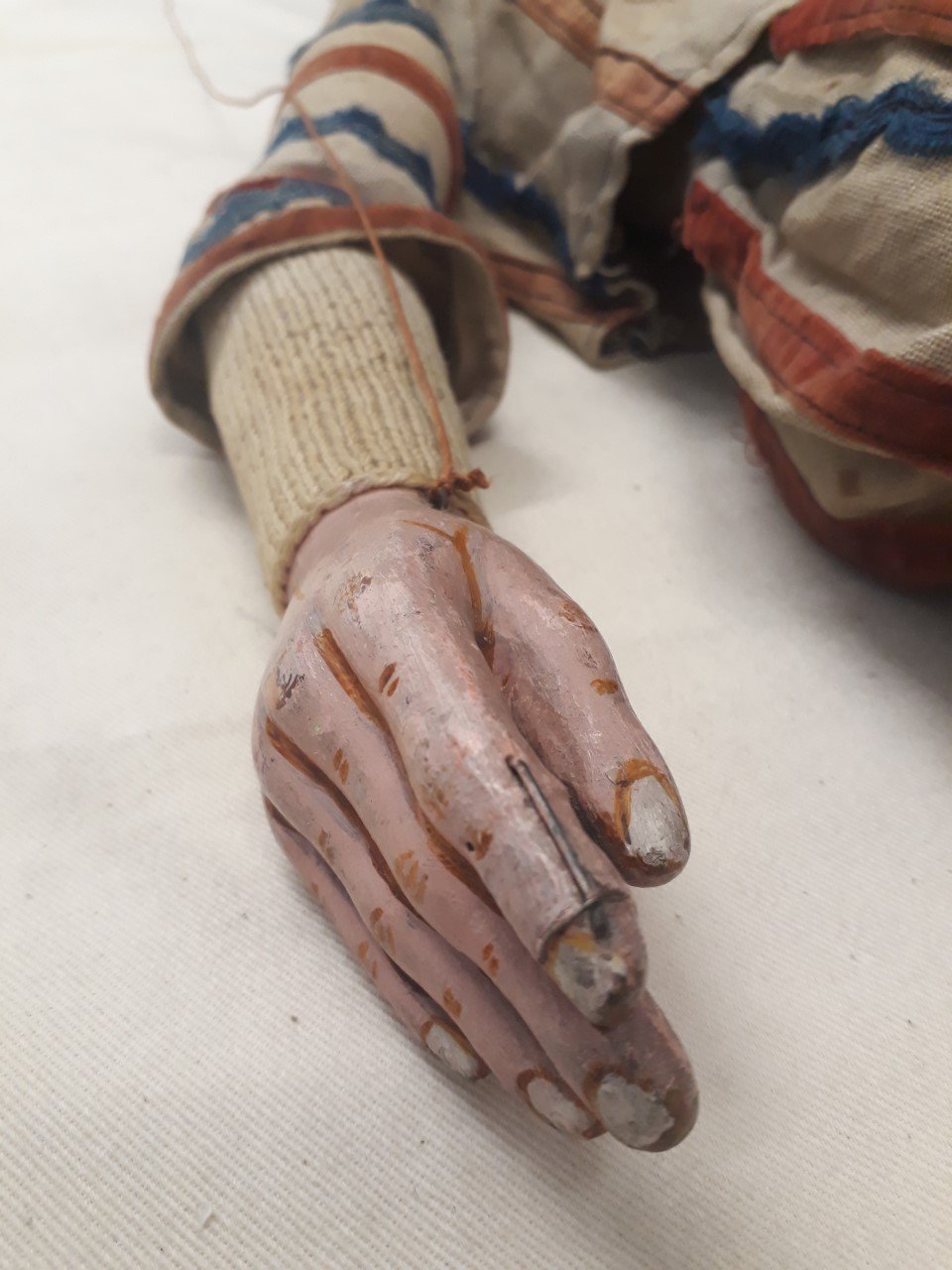 I am Rachel Warr, a director, dramaturg and puppeteer, I originally trained in dance, then mask and mime. I now work as a director specialising in new writing and puppetry. Puppetry unites my interest in movement, design and finding unusual ways to communicate stories, I run ‘Writing for Puppetry’ at the Little Angel Theatre where I have previously been an Associate Artist and I am the Artistic Director of Dotted Line Theatre. My work has been nominated for a Total Theatre Award and has won a Royal Television Society Craft and Design Award.

Tell us a little more about Tricks with Strings?

Tricks with Strings Is a short piece of puppetry I’m directing as part of the Victoria & Albert Museum’s ‘Festival of Performance’. It features English string marionette puppets (c.1870s) from the V&A’s collection. They were originally from the Tiller-Clowes troupe, one of the last Victorian travelling marionette groups to tour Britain with a portable theatre.

A few of the puppets from this collection are currently on display in the Theatre and Performance galleries, but most of them are kept in storage at the museum. It is rare to get access to them and the last time they were used in a performance was in 1999, and before that the 1950s. They are an important part of our puppetry history and heritage; beautifully carved, painted and clothed. Some are trick marionettes, designed to perform unusual trick maneuvers, by way of extra strings and mechanisms. Not all of the puppets in the collection are in a working state, but last week, my team and I worked with two of the curators to untangle and replace damaged strings. It was very exciting to then get these puppets up on their feet and bring them to life again.

How did you get involved with the V&A?

I first met the Senior Curator for Theatre and Performance while working on a cross discipline project set up by the V&A’s research arm. ‘Encounters on the Shop Floor’ includes artists, crafts people, performers, scientists, surgeons and academics united by their use of complex hand skills and muscle memory. The group is concerned by the lack of government recognition of how important these skills are in relation to learning. It is a fascinating group to be a part of as ‘thinking with your hands’ and other embodied skills are often associated with the arts but really they are just as important to science and medicine.

How have you approached working with delicate and unique puppets from the Collection?

I am a fan of bringing different people together to share expertise in different fields. At the V&A there are certain rules about handling museum objects, and the curators who are over-seeing our work are not used to having non-museum staff handling museum items without both protective wear and supervision. It has been an interesting sharing of process, and there has been an acknowledgement on both sides that there is more than one way of respecting an object.

I have tried to get a balance between acknowledging the historical context of the puppets, and creating something on no budget for a modern audience. As we only have a couple of days working with the puppets we will be presenting a low-tech, poor-theatre sort of aesthetic rather than a proscenium Victorian marionette stage. We stay true to the puppets’ characters and the sorts of music and routines they were designed for, they are a joy to work with so I think their characters shine through as fresh as ever.

Following our day of re-stringing and getting the puppets on their feet, one of the curators, beaming, told us she had not seen the puppets used before, or understood how some of the strings and joints worked, we hope that the public will feel the same.

Why do you think events like these are important?

For so many reasons- they have a benefit for puppetry practitioners, museum staff, and audiences. As puppeteers we can learn a lot from how British puppet makers and performers designed and used their puppets in the past, for example, the puppet controls are very different from the ones being used by UK puppeteers today. It is a challenge to work out how best to operate a trick puppet and good to consider your own work by being challenged by something unfamiliar.

It’s important to bring together museum staff and working puppetry practitioners, I’m thrilled to be working with such a lovely puppetry team: Ronnie Le Drew, Susan Dacre, Keith Frederick, Sian Kidd, Eti Meacock, musician Jake Rodrigues, and writer Vickie Holden. As a team we have had the opportunity to understand the history, context and use of the puppets and, in turn, the V&A staff have been able to see something of how puppeteers string and puppeteer marionettes.

We need more marionette work reaching the public, there are only a few places where you can watch marionette shows in the UK today so I am delighted to be bringing marionettes to a new audience. As Tricks with Strings is not taking place in a theatre I hope it will reach people who might not venture into a traditional venue as well as those who may have never seen a puppet show before. We’ve all fallen in love with the puppets we’re working with, there really is something magnetic about puppets at the end of strings!

What’s next for you?

After Tricks with Strings, I have a show on at Little Angel Theatre, Stories on a String, with my Company Dotted Line Theatre in collaboration with Polyglot Arts. I’m also doing a project about Kinesthetic Empathy with Kensho Miyoshi at Royal College of Art, and a collaboration with East London Textile Arts.