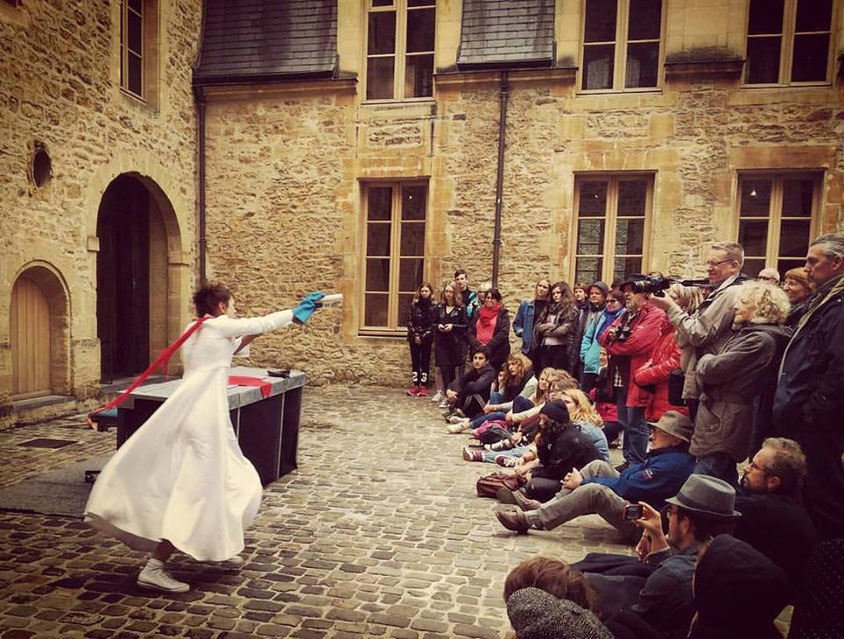 At the Charleville-Mézières international puppet festival, a discussion and several performances drew attention to gender roles and the power of puppetry to destabilise the ‘accepted’ hierarchy of people and things, men and women.

Women hold many prominent roles in puppetry. They are directors of festivals (for example, Anne-Françoise Cabanis, director of the Charleville-Mézières festival; Liz Lempen, co-director of the Skipton Puppet Festival; Rachel McNally, co-director of Bristol Festival of Puppetry). They lead courses in puppetry (Marja Susi and Anna Ivanova-Brashinskaya at Turku University; Cariad Astles at Central School of Speech and Drama; Lucile Bodson, formerly director of the Institut Internationale de la Marionnette). They run many puppet companies and make up the majority of graduates from puppetry training.

So why was there still a need to discuss ‘the place of women in puppetry’? asked puppeteer Claire Latarget of Anima Theatre, who chaired the discussion. She said there were pained grimaces from other women when she raised the topic: many felt it was ‘too close to the bone’. Yet there was clearly plenty to discuss, and a sense of urgency about the lack of progress. (This took place before the Harvey Weinstein case brought sexual harassment and structural discrimination at work into a wider public debate.)

About 40 people squeezed into the café of the Institut International de la Marionnette for a breakfast meeting organised by Themaa, the French equivalent of UNIMA. Women puppeteers on the panel spoke about rehearsing and touring shows, and also about the creative process. There were nods of recognition around the room as the panellists reflected on their experiences.

The singer and puppeteer Yael Rasooly (born in Israel and touring internationally with her show Paper Cut) described the sort of tensions that can arise when, for example, a female artist asks a male technician to make adjustments to the sound quality in a technical rehearsal. Rasooly said that in the past she blamed herself, her ‘personality’, for these conflicts over ‘expertise’. Only now, after 11 years in the profession, is she becoming aware that they are part of a much wider pattern of unspoken assumptions about ‘who knows best’. While for Rasooly this meant some frustration as she realised just how widespread sexism was, it also provided new tools to challenge it.

Norwegian director Yngvild Aspeli (based in France with her company Plexus Polaire) spoke of her continuing surprise at how people at all levels within apparently progressive theatres tend to assume that in any mixed group, a man must be the boss. It’s an assumption made by both men and women, since we have all been socialised within patriarchy and have internalised its values.

In her responses, Dinaig Stall (University of Quebec) suggested that women make daily choices about whether to fight instances of sexism directly and immediately, or to make a ‘patriarchal bargain’ and accept a given gender role. Challenging sexism can be exhausting, but it is also energy-sapping to have to decide whether each particular battle is worth fighting.

Speaking about the creative process, Yngvild said she was exasperated by having to defend her approach to making performance against men who were all too ready to tell her she should have done it differently. Her aim, she said, is to reverse the usual object-subject hierarchy and allow audiences to enter into the feelings of the object – something puppetry can do particularly well.

Dinaig commented that puppetry training offers women huge freedom – as young performers, it means they are not limited to the role of ‘soubrette’, the innocent yet knowing girl, but can incarnate bodies of any age, sex or species.

As I left the café, still musing on this discussion, I came across a street performance, a one-woman retelling of the Bluebeard story, that reflected on some of the same themes.

Delphine Delafosse (Agathe dans le vent) plays all the roles in Les Curieuses (‘The inquisitive women’), with the help of a set of household objects. Each new bride is introduced with the traditional fairy tale formula - ‘Il était une fois’ (‘Once upon a time’). Bluebeard is represented by a bright blue industrial strength rubber glove. Dressed in a white wedding dress, Delafosse performs both Bluebeard and his brides. She’s at the intersection of horror film and object puppetry – with the blue glove violently attacking the body of the performer who wears it.

After several inquisitive brides are killed off, there is yet another wedding. ‘Not again!’ cried the children sitting cross-legged in the front row. The wedding gifts are divided, for ‘him’ and ‘her’. For him, a teddy bear and a mallet; for her, frying pan, cleaning brushes, a colander and a sink plunger.

This time, on opening the doors of the forbidden red room, the bride receives a fat volume entitled Qui Es Tu? (‘Who are you?’). She becomes so engrossed in self-discovery that she fight soff her husband’s murderous attacks in passing, making ingenious use of her wedding gifts: the colander becomes a helmet to protect against the mallet and, despite calls from the front row for her to deploy the frying pan's she eventually flattens Bluebeard with her new book.

Delafosse’s impressive solo performance of object theatre as slapstick was followed by an impromptu discussion with the class of children who’d been brought along to enjoy street theatre at the festival. They were full of questions. Why didn’t the heroine want to be married? What was in her book?  Could they keep it?

In the official festival, there were more thought-provoking performances about women and gender roles including Ricdin Ricdin (Theater Meshugge, directed by Ilka Schonbein) in which the fairytale of the girl who spun gold out of straw suggests the competing claims of creativity and family; and Aeterna, performed by Claire Heggen and Elsa Marquet Lienhart (Theatre du Mouvement) which explores archetypes of the mother-daughter relationship.

In the light of the breakfast discussion, there was much to think about in other performances that did not necessarily make women their theme. And what would we need to talk about in a British puppetry context? The heightened setting of a festival allows one performance to reflect on another, with conversation afterwards bringing more and more examples to the table.

Late at night in the bar of the brilliant ‘Bateau des Fous’ venue run by Compagnie StultiferaNavis, two musicians in overcoats stumbled onto the small cabaret stage. The musicians of TripTease by Compagnie Mouka, a three-woman company based in Bordeaux are headless giants, with clothes hanger hooks where their heads should be.

With sighs and little high-pitched gasps they animate the head of a mannequin as a coquettish ‘soubrette’. She acquires a feather boa and borrows her stockinged legs from one of the puppeteers.

She then unfolds from a large cooking pot a headless female puppet made of stuffed pale pink fabric - with wobbly belly and fat stumps for legs. A grotesque burlesque, she twirls her nipple tassels before beginning a more extreme strip tease. Peeling away the fabric of her own thighs, she’s left with a pair of metal shoe trees for legs. She peels away the skin of her chest to reveal raw breast tissue and contorted intestines. Having reduced her body to bare bones as if through starvation dieting or self-inflicted cosmetic surgery, there was nothing for this woman to do but to return to the cooking pot.

There was much wincing and grimacing in the audience at a performance that was, like the morning’s discussion, ‘close to the bone’ – and there was relieved laughter too, when two young women emerged from the giant’s overcoats to take a bow.