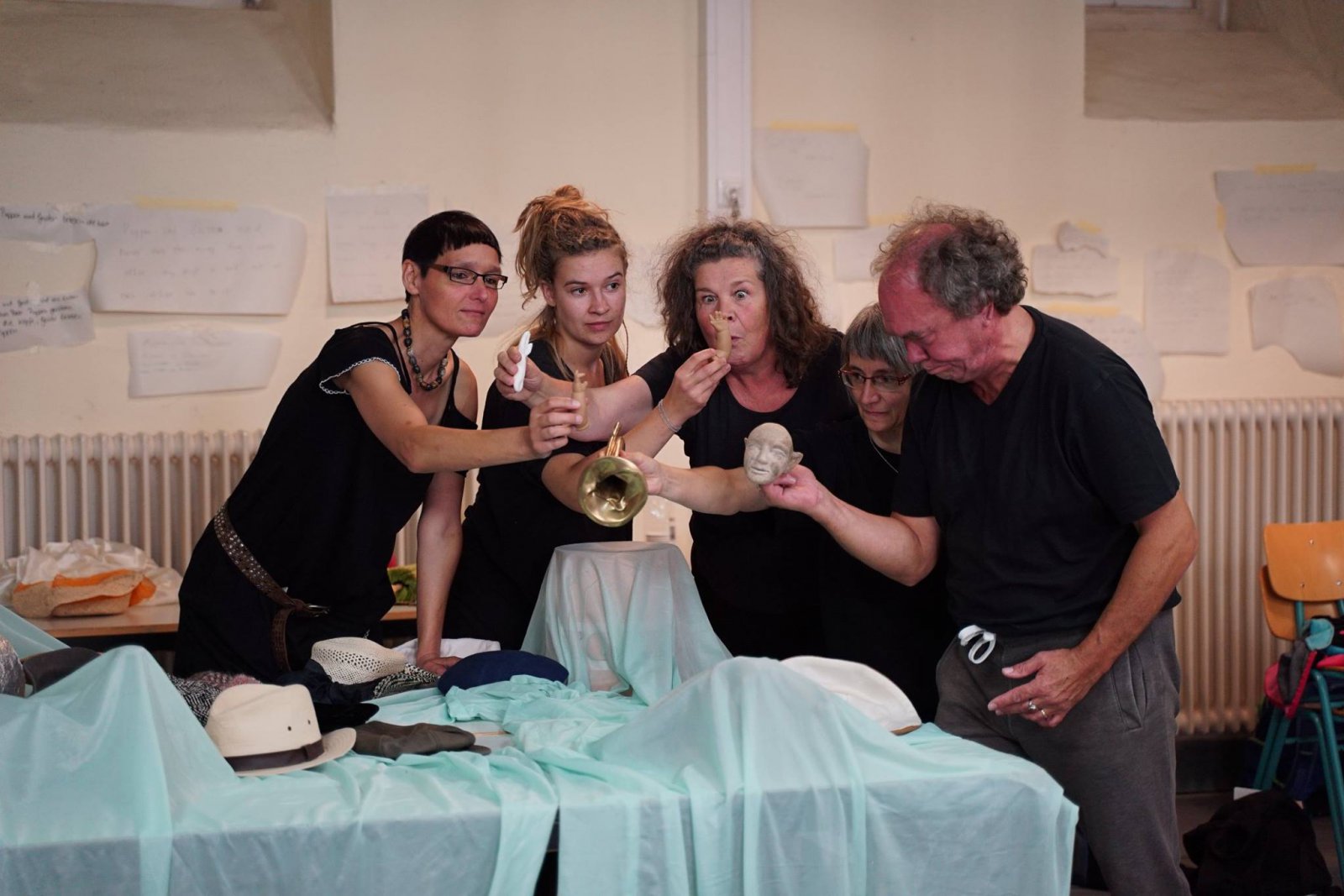 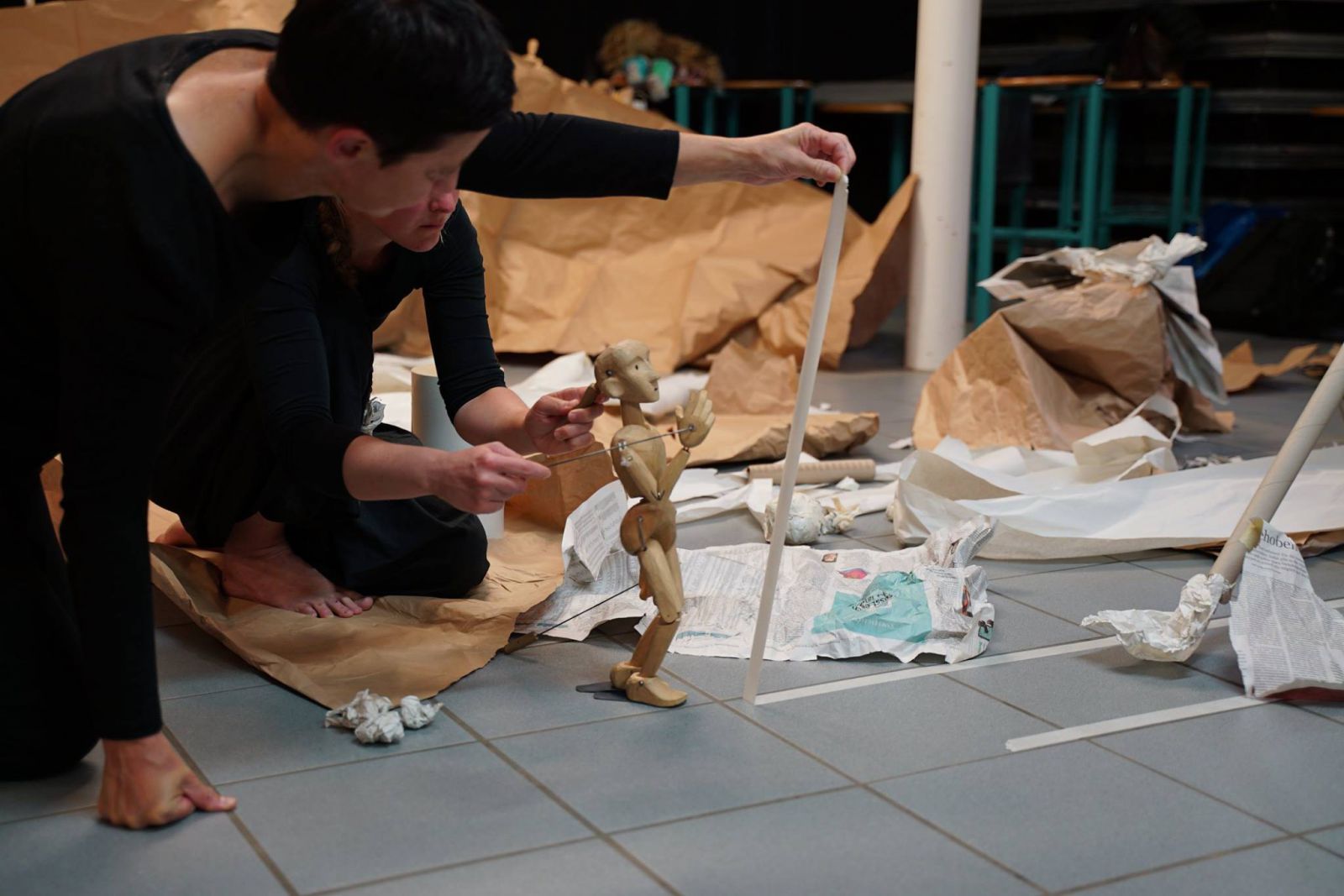 When you walk through the streets of the small Lower Saxony town of Northeim, you’re in historic country. Cobbled streets are lined with half-timbered houses. “There’s only one hotel,” someone tells me later. If you walk past the big church and around towards the medieval town wall, an unlikely building appears. Theater der Nacht (Theatre of the Night) is an oversize fairytale house. Its façade actually has a large nose protruding from it. The walls are a warm pink, the tiles a homely red. Your eye is drawn up the high tower towards another nose. And above that, the tall tower has a peak, which bends back over itself – to create the shape of a dragon’s snout, keeping watch down the lane towards the town gate at the bottom of the hill. And if you look closely through the tower windows you can see that the spiral staircase inside is carved into vertebrae – the dragon’s spine, twisting all the way from that looming head down to the entrance.

This is the building that hosts the annual conference organised by UNIMA Germany and the German Union of Professional Puppeteers - an intense week full of energy, care and community. This is the third time that the conference has been held, curated by Ruth Brockhausen (whose house this is) and Alice Therese Gottschalk (who was last seen by British audiences at the Barbican in Wunderkammer).

The conference begins across a weekend with a two-day Symposium, composed of discussion and performances. (This allows puppeteers who are not able to attend the full conference (as well as those who are) to meet, mingle and discuss.) The Symposium has an academic and theoretical feel, in contrast to the practical focus of what follows. The main conference then runs from Monday to Saturday – five days of workshops culminating in a public performance in which each workshop shares some of its work. This year the conference has something of a British flavour. Cariad Astles (of Royal Central School, Exeter University and British UNIMA) led one workshop. I led another, and also spoke at the symposium. The other two workshop leaders are Hans-Jochen Menzel, of the Ernst Busch School in Berlin, and the celebrated German puppet maker Mechtild Nienaber. The structure of the conference is similar to the O’Neill Puppetry Conference in Connecticut, USA, where Gottschalk is a regular contributor.

The atmosphere at the conference is – as is so often the case at puppet gatherings - cordial and welcoming. There are about 35 attendees for the symposium, most of whom are among the 40 to 50 who are participants in the workshops for the main conference. It’s possible to fit the whole conference, organisers, participants and workshop leaders, in a room (or on the stage, as we found later). The tone is struck by the host, Ruth Brockhausen, who, with her husband Heiko, has created the building across twenty years, converting a 1930s fire station into a well-proportioned puppet theatre with a music studio and fully-equipped workshop for puppet making and set building. They both create and perform in their shows, and both offer a kindly twinkle as they welcome the participants personally. The café is filled with solid wood-carved chairs and stools, each one unique. There are puppets and masks on every wall, and when a show is about to start, instead of ringing a boring bell, Heiko blows a tune on one of a pair of two-metre papier-maché alpenhorns to gather up the audience.

The subject of the symposium was Puppetry and the Brain. I presented reflections on my research project last year as an Artist in Residence at Queen Mary’s (University of London), interviewing a series of neurologists, psychologists, philosophers and researchers about how it might be that the brain responds so strongly and uniquely to puppets and performing objects. Alice Therese Gottschalk was the moderator, and we were joined by two academics. Prof Dr Gerald Hüther is a neurologist and science communicator with a high profile in Germany – a relatively well-known figure with a strong interest in children’s neural development and its implication for how we organise society. Prof Stefan Treue is a working researcher with a special interest in perception. We debate a little what kinds of signal the brain might be responding to, and demonstrate some of the paradoxes and blind spots of our perception – quirks of how we interpret the world that sometimes allow the puppet to draw us in and create a response before we know what we are looking at. We examine how we see and hear, how we empathise and how an active audience creates the images and imagined minds of other people both in life, on stage and in puppets or manipulated objects. Discussion during and following the symposium was wide-ranging. Prof Hüther made a strong argument for the importance of a puppetry presence in presence in primary schools and was keen to use the event as a springboard for lobbying activity by the puppeteers. So the discussion existed not only on theoretical and artistic levels - it expanded into proposals for practical action and social engagement.

Around the symposium sessions were performances, four of them by Thalias Kompagnons of Nurenberg, all performed by Tristan Vogt. Vogt, a skilled hand puppeteer, has the ability to shift fluently between storytelling, hand puppetry, and object manipulation. The repertoire he presented mirrored the themes of the conference very well. Across the four shows, Vogts exploded the conventions of glove puppetry and the playbooth, and employed expert manipulation to give character, intention and dynamism to puppets, small models and even tiny stones. The repertoire demonstrated perfectly how our minds are active in creating character, relationship, intention and the theatrical reality.

One very striking aspect of the conference is the range of backgrounds of the participants. Many of them are practising professional puppeteers and actors, (working either for adults, children or both). Others are skilled amateur performers. And a significant proportion are from outside the theatre world. There are play therapists, and occupational therapists. There are kindergarten teachers. One of my workshop participants is a policewoman who performs shows about cyber-bullying in schools – and another creates shows for an environmental charity. All of them support and value puppetry and are happy exploring different techniques, themes and styles.

Mechtild Nienaber’s workshop group were each making a puppet head in her highly-developed soft sculpture style. This was the first time that Nienaber had given a teaching workshop in her long career, so places were eagerly taken. Participants worked to carve their heads in foam and cotton wool wadding, paint and insert alarmingly realistic eyeballs, and then put together a skin covering in stretch fabrics, learning about particular stitching styles and the shading and painting that make Nienaber’s puppets so compelling and subtle. This group regularly worked late into the evening, and Nienaber was happy to stay late and keep supporting them. In the final public presentation, each maker sat on a stool in the lane behind the theatre, with a head torch lighting the head they were working on, and a needle in their hand, adding final details.

Cariad Astles’ theme was ‘puppets and ghosts’. Astles has a wide range of experience of puppets in different contexts: therapeutic, educational and theatrical. Her enquiry was to probe at the sensitive territory where puppetry seems to unlock something beyond the simply performative. Her participants worked with objects, puppets, materials, and atmospheres. The materiality of what was held was constantly present – even (or especially) when the substances were unmanipulable – sand, water and air. The glimpses of performance that were shared at the end of the workshop offered sly humour on dogmatic traditions of manipulation, along with unforgettable images, handled with care and sensitivity.

My own room looked at ‘finding the moment’. Participants worked at first with sticks and objects, then with three-operator paper figures, and often on the relationship between the puppeteers with no puppet in between. They looked at the moments of connection between puppeteers in two-character improvisations; and how that relationship is complicated by multi-operator puppets. They went on to look at how a scene can be both solidly composed but still playful, and how puppeteers can seek out both the moments between each other, and the even more crucial ones between them and the audience.

Hans-Jochen Menzel’s workshop invited participants to bring a puppet or an idea that they wanted to develop. He wove them all together into a surreal single performance set in a café, where every table held a performance where an object was liable to transform or come to life, stewarded by a leering, masked maitre d’. It became a persuasive framework for a wide range of performance and puppetry styles.

The participants were able to mingle freely in the small town. Most were staying in the local youth hostel, where lunch and dinner were also provided. Later on the comfortable theatre foyer offered another space to connect (and a bar), so there were plenty of opportunities for old and new friends to develop their relationships.

Towards the end of the week the groups developed some short excerpts from their explorations to share. The performance was public - a way of sharing the conference with the wider community. It was striking how many of the audience were local people who were (clearly) regular supporters of the theatre. Many of them stayed afterwards to enjoy soup and a celebration. And now even a few weeks later, the sound of the excellent brass band who played at the final night party is still in my ears.

This conference model is a successful one, bringing together several workshop leaders and offering a space where puppeteers can gather over a period of days. It might be something that would work here in the UK, where professional development opportunities are scarce and irregular. It needs coordination and funding, but it’s certainly worth trying.