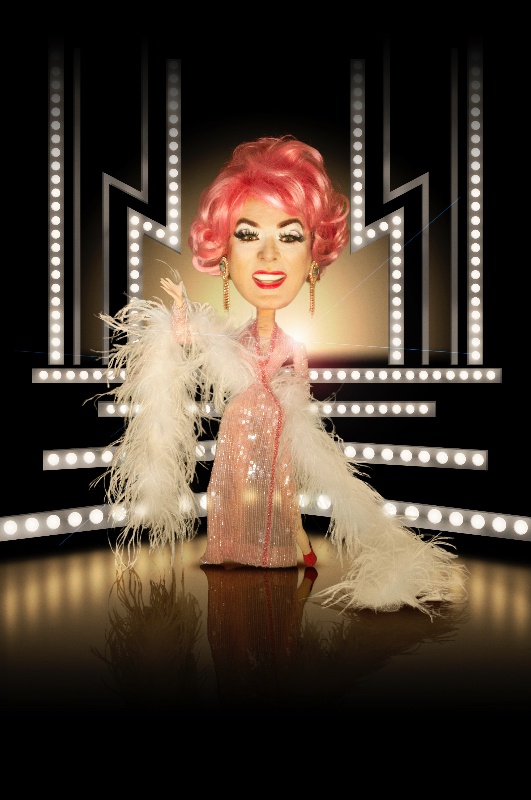 We sat down with Mark Mander, the creator of the fabulous Clementine the Living Fashion Doll, to hear some of his thoughts on puppetry and comedy. This is part of our series of interviews in This Is Puppetry.

My career divides into two related areas. Firstly I’m a freelance puppeteer,designing, making and operating puppets on stage,TV and film. Secondly I have my own puppet character,’Clementine the Living Fashion Doll’ who has appeared on stage, TV and film around the world from Oslo to Singapore. She is currently appearing in the West End of London in The Clementine Show at Crazy Coqs / Brasserie Zedel.

2) Why do puppets work in comedy?

Comedy is an extremely complex and subtle form of entertainment, its also very divisive. Try discussing comedy programmes with a group of friends. If the group is large enough, you are sure to come across a title that at least one friend HATES, and I mean really despises. It's a kind of deep seated loathing reserved for comedy rather than other areas of artistic expression like drama, which people tend to simply ignore if its not to their taste. Why does comedy generate such a passionate response? I think it might be something to do with different mindsets …how people see the world. The observational comedy of Victoria Wood might bore some people to tears- they might prefer the double-meaning laden world of the ‘Carry On’ films, which in turn others see as dated and offensive.

Puppets do have certain advantages when it comes to caricature, the long running satirical program ‘Spitting Image’ is the obvious example, with the amazing likenesses taken to cruel extremes.
Glove puppets, with their quick, decisive movements can be very good at physical theatre/ clowning -and of course Muppet style puppets have created their own style of TV comedy.

So, to answer your question, using a puppet in comedy is no ‘get out of jail free’ card - it won’t ensure a laugh. If the puppet manages to convey some area of human frailty - be it defeated pride or thwarted ambition, or slipping on a banana skin - to an audience member who likes that form of comedy, then the puppeteer might be rewarded with a chortle.

3) What originally led you to use puppets, and when?

When I was very young, I was given a Pollocks Toy Theatre for Christmas. For those who don’t know, Toy Theatres were developed in Victorian times, originally as costume sketches of popular actors printed as souvenirs. Eventually full Theatres with complete casts and interchangeable sets were available. I guess they were the X box of their day! Their charm still remains, as its possible to stage elaborate productions using only cardboard and imagination, which can delight an audience or send them into despair, depending on your skill. I think I tested the patience of my family with 90 min productions, but they were a way of creating magical worlds and they grabbed my imagination. I still love Toy Theatres and regularly visit Pollocks in Scala St and Covent Garden for a miniature theatrical fix.

My second influence was The Muppet Show. It was simply the best thing I had ever seen and made much more sense to me than what adults were telling me was reality. After seeing the first episode I knew I was a puppeteer, simple as that.

4) What is your favourite puppet in comedy?

Well, I have a couple. Firstly the divine Miss Piggy, (Who I’m sure all of your readers will know). Secondly, Lamb Chop and thirdly Madame. At least two of those three were Divas played by men. I might see a pattern forming! If you don’t know Madame or Lamb Chop, give them a Google.

5) Please share a memorable story about puppetry in your life.

Well, I’m not sure if his is a memorable story, but its certainly a story of a lovely memory.

I was lucky enough to be cast as one of two puppet characters (alongside the lovely Louise Gold) who co-presented Live at the London Palladium, a comedy variety show on ITV a couple of years ago. I had been taken on a back stage tour of the Palladium six months before and was bowled over by the lovely feeling on stage, its a huge space but feels extremely intimate and warm. I vowed to myself to play the space.

I was so excited to perform in a theatre long regarded as the home of variety entertainment and it remains a cherished memory. How others remember my performance and the show will be down to the variability of puppets in comedy!

Clementine the Living Fashion Doll can be seen at Brasserie Zedel: https://www.brasseriezedel.com/live-at-zedel/the-clementine-show-2018 Her wonderful website can be found here: www.livingfashiondoll.com