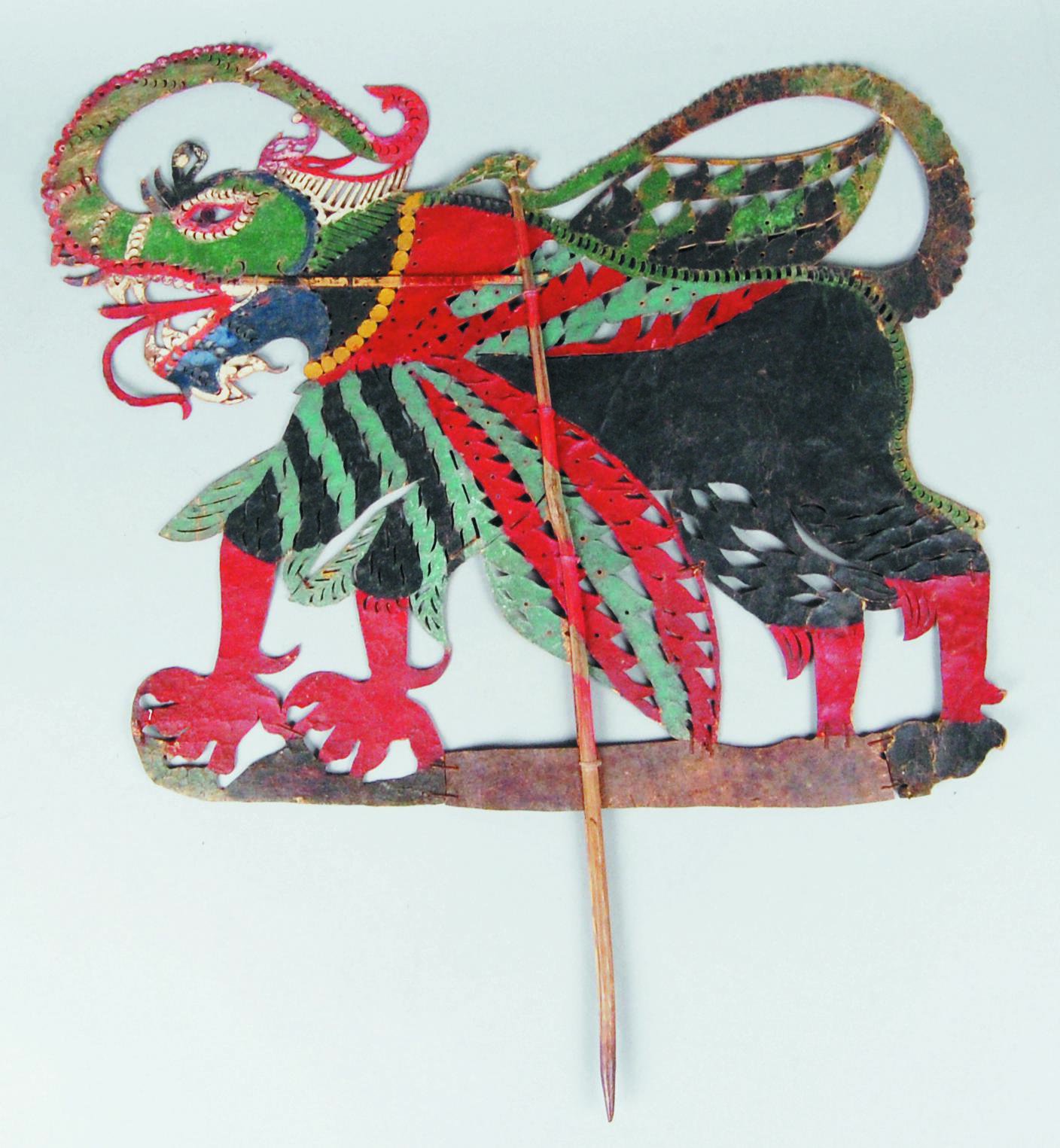 What were you trying to demonstrate in this exhibition?

Dr Green: I had two main goals: one was to show we had a substantial shadow puppet collection here at the British Museum, most of which is not usually out on display, and the second was to demonstrate that in Southeast Asia puppetry is not for children, it is much more involved in the larger social fabric.

How is shadow puppetry used in these countries?

Dr Green: What you’re getting in places like Phetchaburi Province in central Thailand is that it’s part of religious ritual, so you have ritual scenes the puppeteer enacts before the start of the story, which might be a local folk tale or a tale from the Ramayana, the Indian epic that has been reinterpreted and re-used. Certain scenes of a performance are repetitive because they’re not really done for entertainment; they’re done for the ritual.

Sometimes there would only be me and my mother in the audience. The spirits are the audience; they’re the ones that count, because often the way it’s used in countries like Thailand is for funerals. For all three puppet shows I saw there would be a chair set up in front of the stage for the spirits with a piece of cloth and an umbrella over it indicating respect and superior status. There’s usually a glass of water set on the chair so it’s as if the spirits are sitting watching the performance.

In Malaysia, the puppet shows are now entertainment; ritual is viewed suspiciously by the Islamic authorities because the idea of spirits sits uneasily with Islamic tenets so shadow puppetry is less frequent there.

As we approach the Harvest Festival in the Christian calendar, can you describe how the harvest is marked in shadow shows in Southeast Asia?

Dr Green: It’s not that the harvest is specifically celebrated but more the harvest is celebrated by having a puppet show, which doesn’t necessarily relate to the harvest. That makes sense because everyone is busy planting and growing and often times the puppeteers have more than one job. The pay of a puppeteer is not sufficiently lucrative to sustain them, I mean, there are a few celebrities now who can, but most can’t.

What is the training for a puppeteer in Southeast Asia?

Dr Green: There are a whole variety of systems. In Malaysia, puppeteers can be self-taught but there are apprenticeships too. In terms of female puppeteers, there are a few but not many; I think there are more in Thailand than in Malaysia and Indonesia but they are very limited. It isn’t usual for women because of their role in society and what’s considered to be appropriate. As shadow theatre is associated with the spirit world men are considered the better medium to connect with them.

The exhibition is divided into vitrines displaying characters like ogres and ghosts and animals and figures from the Ramayana. You can compare the stylistic differences depending on the country they’re from. Do you have a favourite puppet or one with an interesting story you’d like to share?

Dr Green: That’s very hard to say. Well, I quite like the animals and in particular the composite from Malaysia is super. This puppet has an elephant’s trunk and bird’s wings and his nether quarters are more like a quadruped. I like him because he is a derivation of a symbol from one of the royal courts on the north coast of Java (image below). So the image is clearly something that transferred from Java to Malaysia. What’s interesting of course is that the representation probably originated in China as the qilin, which is also a composite animal, so this is a multiple appropriation of imagery.

Another is the mythical Javanese serpent, the Naga, which is one of the Raffles puppets that he collected when he was UK governor of Java 1811 – 1815 and the reason why I’m so excited about him is that we borrowed the Serat Selarasa manuscript (1804) that is painted in the style of Javanese shadow puppets (even though the story is not part of the shadow puppet repertoire). On the page we have open in the first room it has an illustration that replicates this Naga puppet. (image below)

Who was Raffles and how did the British Museum come by the collection?

Dr Green: Sir Stamford Raffles was a British Colonial Official who went out to SE Asia and became Lieutenant-Governor of Java. The whole time he was there he was passionate about the culture. In Java he collected masks, three dimensional puppets and shadow puppets and we have musical instruments like the gamelan he brought back too. In 1817 he wrote a book on the history of Java but he was equally assiduous wherever he went and in Sumatra collected Malay manuscripts and natural history material too. Tragically, quite a lot of it was lost when his ship sank. It caught fire, and a large collection of Malay manuscripts were all destroyed. He went on in 1819 to found Singapore and so of course that’s what he’s famous for today. In 1824 he returned to Britain and died in 1826 but these objects didn’t come to the British Museum until 1859 when his nephew gifted them to us.

Can you talk me through the mechanics of a typical shadow puppet show in Southeast Asia?

Dr Green: Traditionally there’s usually a little pavilion outside and a sheet is stretched across to make the screen. Electric lights are used today but in the past it was oil lamps. The banana log is put behind the screen and this is where the puppets are stored until they’re needed. The musicians will be seated on this platform which forms the stage and they’ll play here and the puppeteer will sit in the front of them and direct the musicians as well as moving the puppets. He will also produce all the voicing and singing. Sometimes in Java you have women singers as part of the orchestra and then again they are conducted by the puppeteer. In terms of the audience, as I mentioned before, they are the spirits, but they’re also the family who commissioned the show. People come and go. Some of them watch for a bit from the front and sometimes they go and look round the back.

There’s been some evolution of the shows too as puppeteers develop new plays from novels and films. In some of the cases you can see how heroes and villains now include corrupt bureaucrats, business leaders, wealthy individuals and even hip hop artists.

Are there any well-known puppeteers?

Dr Green: There’s a blind puppeteer who performs in southern Thailand and he’s very popular and sometimes there are thousands of people coming to watch him. Then again, there are celebrity puppeteers in Java who get huge numbers of audience too. Now shows are amplified and you can watch them on youtube, so social media is very much involved in the publicity.

How long do the shows last?

Dr Green: The puppet shows generally take place at night. The performances last such a long time, the ones with the spirits in central Thailand can be two to three hours continuous; the ones in Java traditionally start at 8pm or 9pm and go on till dawn. Then the ones in Malaysia are a bit more truncated; they used to be longer but have been curtailed a lot more. In the puppet show I saw in Southern Thailand the puppeteer performed from 8pm to 10pm and then there was a break and he continued on till midnight.

Made by Tok Awang Lah