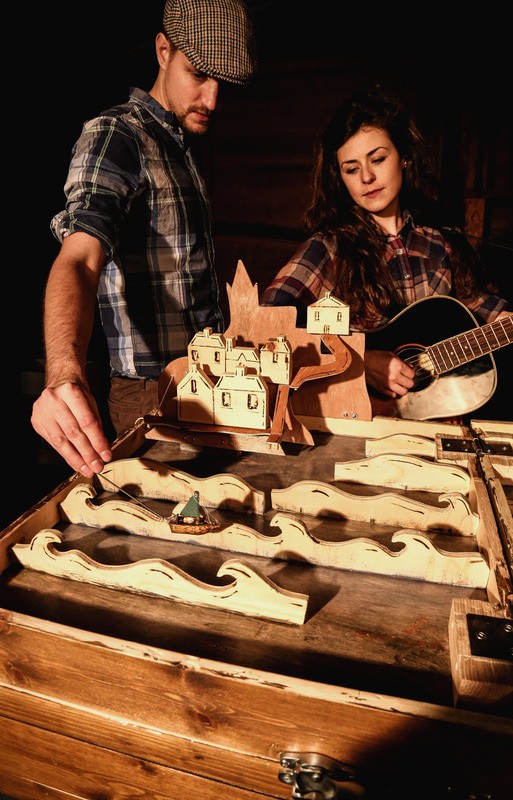 The story literally ‘unfolds’ before our very eyes as all the action takes place in a beautifully crafted treasure chest of intricately carved miniature wonders. The set is beautiful and charming and would be best viewed in an intimate space with a small audience.

Simmons, a self-taught musician, is our (engaging) singing storyteller tying together this atmospheric tale with the use of her guitar and looping samples from a whole host of instruments with a warm folk music feel.

Whilst the brilliant use of music helped transitions in the action, the rhythm of the music driving the narrative was sometimes at the expense of a deeper exploration of the puppetry. There was a great deal of exposition through song as opposed to action. That said, Morton’s manipulation of his ingenious set and puppets was deft and loving and Simmon’s musical score haunting. Some plot development was passed over quickly. Why the boy decides to retrieve his heart after throwing it into the sea was never really explained, but it didn’t matter to the children who were transfixed by this heart-warming tale.

There were lovely touches throughout the show that included the gentle encouragement of the audience to participate in the progression of an encroaching storm, a brilliant comedy cameo from a bearded sea captain plus a host of silly noises used to great effect, and a truly beautiful whale puppet.

I look forward to seeing more of their lovingly crafted stories