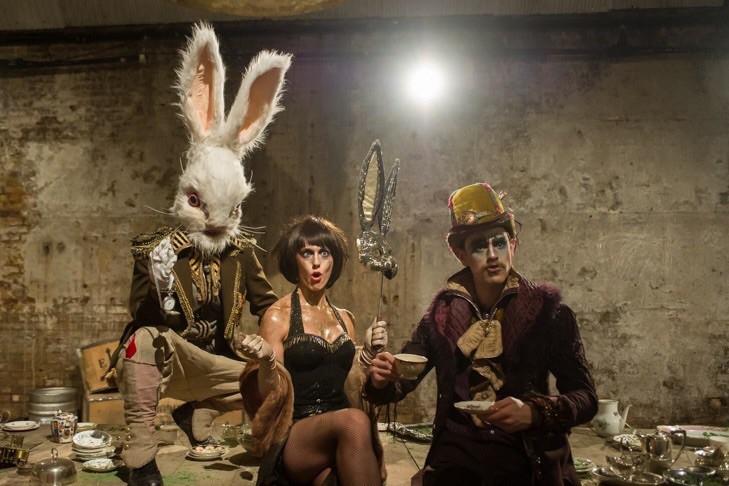 On the 150th anniversary of ‘Alice’s Adventures in Wonderland’, award-winning theatre company Les Enfants Terribles give their distinctive take on the Lewis Caroll classic. Until the end of August, they are inviting us to tumble through the Vaults under Waterloo station and into their new immersive promenade performance, ‘Alice’s Adventures Underground’.

There is a rich eccentricity to the world that artistic designer Sam Wyer has created, and from the very beginning I am struck by the impressive attention to detail that has gone into each environment. Our journey starts in an elaborately decorated study, where an expectant audience is eventually surprised by a secret bookcase, which leads to a giant, mirrored zoetrope. Here, an animated Alice tumbles round and round over her skirts. It feels like we have travelled to the bottom floor in an elevator, or even fallen down a deep rabbit hole.

The feeling of disorientation continues when the White Rabbit greets us in a cleverly designed optical illusion room where we have the choice to ‘Eat Me’ or ‘Drink Me’. Your decision determines your journey hereafter. The audience is split and we are shuffled into our respective decks, according to the playing card we are given. We now each embark on our own adventure.

From here the production becomes somewhat less immersive, as we are escorted promenade-style to meet a host of madcap characters. As a deck of clubs, we encounter a pig wielding opera singer, an acrobatic and highly enjoyable Tweedle Dum and Tweedle Dee, as well as a dubious jam tart addict.

The impressive and enormous Mad Hatter's tea party is an outstanding accomplishment with its jumping water feature and sumptuous decor, however my favourite environment is the bohemian shisha lounge, home to the languid, smoking caterpillar puppet. His six blinking eyes and composed performance are a joy to behold. The embroidered mushroom trees flanking the entrance give me an overwhelming desire to explore, which is sadly prevented by the fact that we are strictly guided around in order to follow the narrative thread.

The high production values are evident not only in the set and costume design but also in the puppets, and designer Max Humphries manages to work his usual magic, achieving complicated movement through sophisticated-looking puppet controls. At times I would have liked to see more of what these puppets could achieve, particularly with the ubiquitous Cheshire Cat, whose rolling, floating head and illuminated squinting eyes are sometimes upstaged by their operators. Nonetheless the cat helps to draw us into the sense of espionage that writer and co-director Oliver Lansley has subtly written into the unfolding drama. The clever absence of Alice as a lead character only strengthens the feeling that you have taken her place, experiencing her surreal journey in your own unique way.

This is an ambitious project and Les Enfants Terribles successfully deliver a memorable and grotesquely beautiful 90-minute production. The sense of fun and depth of achievement is a nod to Carroll’s beguiling and timeless creativity, and honours the original text in true theatrical splendour.

"The sense of fun and depth of achievement is a nod to Carroll’s beguiling and timeless creativity, and honours the original text in true theatrical splendour."

We watched this performance at the Vaults under Waterloo, where it plays until the end of August 2015.