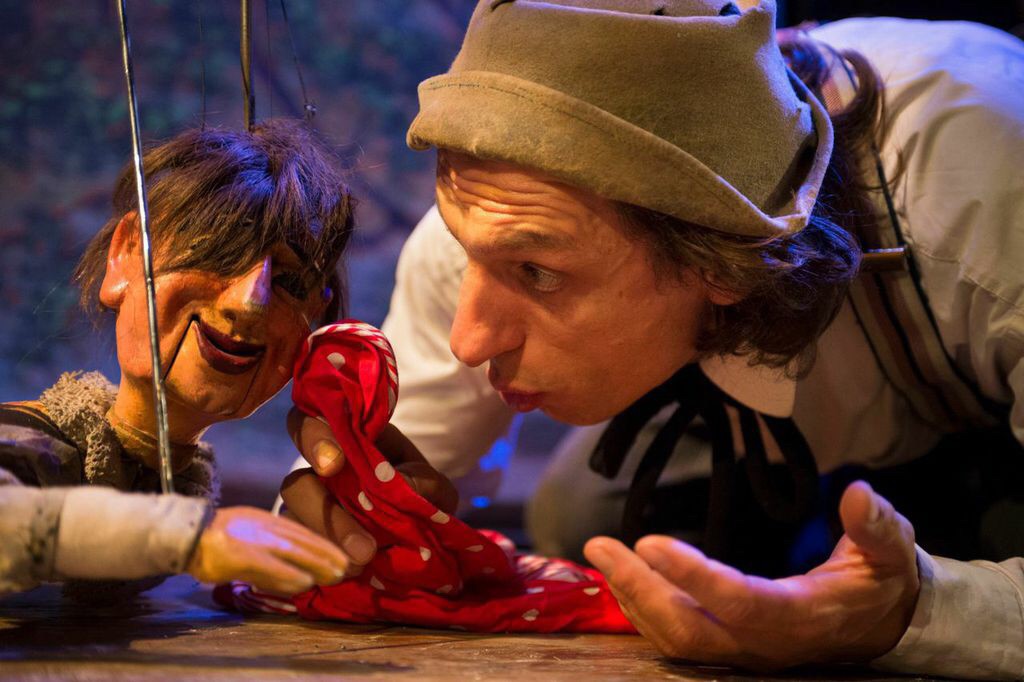 You enter the theatre and on the stage a half dozen men in full Edwardian garb prance about before an archaic, carved proscenium. Some play the violin, others argue with a bearded man in a conductor suit. Meanwhile, an old schoolmarm belts out notes on a piano decorated with lit and melting candles, and a scruffy fellow with wild grey hair attempts to sell Pinocchio puppets to the audience. The "puppets" appear to be logs with twigs glued to them, and they’re going for £50.

This is the introduction to Circus Ronaldo’s 'Amortale', a production inspired by the fairground theatres that once wandered Europe, entertaining isolated villagers in those final twilight years before the Great War. Such travelling shows were often held together by spit, polish, good luck and hope, and more often than not fell apart anyway. 'Amortale' has lovingly recreated just such an ambience of desperate enthusiasm, where mistakes and disasters are all part of the show.

Here is the troupe’s resident drunk, who is so determined to sell his Pinocchios he’ll even interrupt the ringmaster’s speeches. To be fair his Pinocchios are pretty special: I quite like the ‘French Pinocchio’, which is a baguette with a stick in it. Ah, over there: the pretty acrobat, who is pursued (hopelessly) by the company clown. And the schoolmarm: the only competent musician of the group, who is suffered to pretend she’s an opera singer from time to time.

As the show progresses new acts are brought out and new sights revealed. The centrepiece is a Sicilian puppet show, though the puppeteers get a little over-enthusiastic (I don’t think the dragon is meant to set the stage on fire). And throughout it all there are schennigans and pratfalls: this is a busy, sometimes frantic performance, often with four or five things happening onstage at once. The occasional scenes of quiet, simple beauty are welcome respites and reminders that, for all their limitations, those scrappy artists of the early 20th century could really deliver miracles to their public.

It’s not a perfect show: if it has one major problem, it’s that there’s precious little sense of escalation. Things begin in chaos, and continue chaotically. Characters supposedly dedicated to the smooth running of the show seem a bit too resigned that’s it’s all bursting into flames (I single out the ringmaster: he should have burst at least two blood vessels in the first half hour). This means that the last third or so starts to feel a bit like we’re going over the same ground (how many Pinocchios does that guy have in his box, anyway?). However, this is a unique idea implemented very well, a celebration that the theatre is not undone by surprises and bad luck; rather, they can be the best parts of the evening.

"Amortale' has lovingly recreated an ambience of desperate enthusiasm, where mistakes and disasters are all part of the show"

We watched 'Amortale' at the Southbank Centre during the London International Mime Festival 2015.