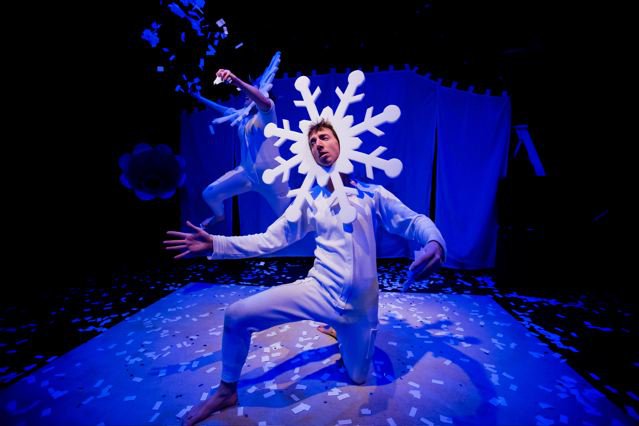 Take three actors, put them together, shake vigorously and hope the result will be 'Antarctica', as fresh and funny and inventive a piece of visual-physical-puppet theatre as you could find.

Sir Peregrine Falcon is on a quest to discover the mysterious Owlarbear among the frozen wastes, meeting penguins and seals and snowstorms on top of the ice, and fish, ghostly squid and a whale in the waters underneath. The Owlarbear finally reveals itself: it is a two metre high furry creature, too shy to be a threat, which is indeed a cross between an owl and a bear (who dreamed THAT up?). Imagine three performers playing or manipulating all this!

Sir Peregrine (Alex Scott, also the director) remains himself, a giant and genial teddybear of a man, the story teller, with the knack of easy communication with the two to six year olds. The seals and the penguins are hilariously embodied by the other two players, Clare Beresford and Dominic Conway, both of whom deserve a medal for their sense of fun and their versatility: as clowns; as penguins (Conway, the perfect penguin); as snowflakes, hurling handfuls of paper snow over the set; as musicians; as seals (padded and moustached, Beresford a super seal); as puppeteers (though in truth the puppetry amounted mostly to stick-held cut-outs waved aloft); as quick-change artists. Clare Beresford throughout reminds me of Renee Zellweger, and that’s high praise; Dominic Conway is another Tati or Keaton.

I don’t suppose the set and costumes cost a fortune, but they are nevertheless ingenious and dynamic, the base attire of the two performers being white long-johns, with black add-ons as necessary. The design is the work of Verity Sadler, the lighting by Tim Streader. 'Antarctica ' runs at BAC until 4 January 2015. It's the second show by Little Bulb that I’ve enjoyed. I won’t miss the next.

"Take three actors, put them together, shake vigorously and hope the result will be 'Antarctica', as fresh and funny and inventive a piece of visual-physical-puppet theatre as you could find."

We watched this performance at the Battersea Arts Centre, where it plays until 4 January 2015.