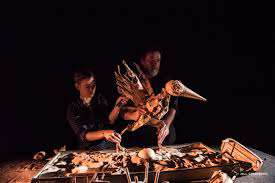 A porcelain egg sits in a suitcase lid full of sand: the promise of action against the calming rush of the sea. The egg splits, birthing a creature in scrunched brown paper. Is it a strange sea urchin? It hasn't yet decided.

Brought to Norwich Puppet Theatre as part of Manipulate Festival, 'Birdheart' is the beautiful love child of two independently successful puppeteers. Inspired by an image of litter washed up on the shore, Saskia Lane and Julian Crouch have created a show that discovered itself through improvised play with found objects, the sea and the sand.

We are invited to peer in on the intimate, childlike world of a creature realising its own existence and possibilities. At first slow, the brown paper swerves and folds along the sand. It pulses with the promise of new life, searching the grainy earth til it acquires a pair of tiny, perfect leather shoes. Standing, Birdheart dives its body down and smugly gazes back at us from its new porcelain shell face. A torch sends the shadow of a bird diving over our heads, dancing out from the creature's papery heart. The sudden toddler explores faces and forms, playfully discarding them once bored and gleefully entertaining us with each new discovery. Sand bleeds continuously from its body, measuring time and change.

A single sheet of crumpled, brown paper leaps through life as a bulbous eyed crab to a melancholy old man in a rocking chair. Wordless, but accompanied by music including a banjo, base and the rushing tide, we are sped along the absurd and sometimes gloomy life cycle of an egg. It takes skill to create a piece that, in its brevity of half an hour, can spin an audience through curiosity, joy, sadness and surprise. Lane and Crouch have found heart and grace in rubbish thrown up by the sea. There is a pureness and hypnotism in their sole use of puppetry that I could watch again and again. But, ultimately, it's nearly Easter and I have eggs to hunt on the beach. Who knows what might hatch.

"Lane and Crouch have found heart and grace in rubbish thrown up by the sea."

If you missed it, check out their open rehearsal video here.