'Biting the Dust' - Grist to the Mill 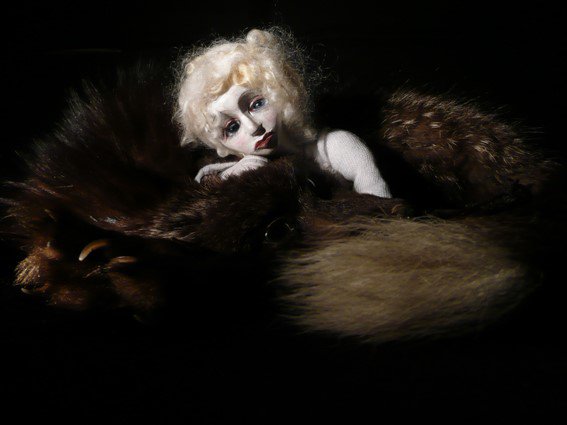 It is dark. Illuminated, faintly, by flickering candles is a human body, shrouded in black, laid out across a table. Is this a wake? There are no voices, no words. Then, emerging from behind the body comes, inexplicably, a teacup. Within it another candle flickers, filling the white clay with an orange glow, so faint as to almost be overwhelmed by the surrounding blackness. The teacup lifts softly, a feather falling in reverse. Then it drifts down with steady patience, until finally settling on the chest of the corpse.

‘Biting the Dust’ is the creation of puppeteer Isobel Smith of the company Grist to the Mill. As a show it has had a long gestation period; I saw a version of it at the Tara Arts Centre in 2011. Although it has expanded since that time into a longer, more complex piece, it has retained its essential form: a series of tableau centered around (in fact, often literally dancing atop of) the concept of mortality. Beyond that, it is hard to say precisely what the show is about: there are no scenes of exposition, indeed no dialogue at all. There are moments of beauty, moments of delight, but what it all may mean is left to the audience to figure out. Much of what parades before us, illuminated in suffocating shadows, is surprising, but clearly not random. A fox (a long, soft puppet, clearly a taxidermied remnant of a real animal) pops in and out, nuzzling the corpse, rolling playfully atop it. The animal is the closest the play comes to having a central character. He remains an innocent, with a charming attitude, despite us becoming aware that he may be eating the corpse. There are other classical puppets, most manipulated with rear rods. They have sharp, elegant faces and long, white robes. It is not clear who these more human figures are. A scene in which a woman drifts (or, perhaps, flies?) over the corpse, observing it with cool detachment, is as elegant as it is cryptic. Another memorable scene takes us on a labyrinthine journey through a nest of shadow roots and wire, where certain shapes may be persons or beasts wandering the subterranean maze with us.

There are a few mis-steps: the play has an elaborate musical score that sometimes overly relies on a track too famous for the play’s subtle atmosphere; hearing it, we are reminded of the musician's celebrity, and the quiet contemplation of the play is broken. Overall, however, 'Biting the Dust' is a puppet play displaying intense focus and confidence in the silent power of graceful movement. Unapologetically mysterious, it may confound and frustrate those looking for easy answers, but for those willing to dance within the dream life of corpses, there is much rare treasure to be found.

Grist to the Mill

"For those willing to dance within the dream life of corpses, there is much rare treasure to be found"

We watched 'Biting the Dust' during the 2015 Suspense Festival in London.