The Boy Who Climbed into the Moon Theatre Alibi 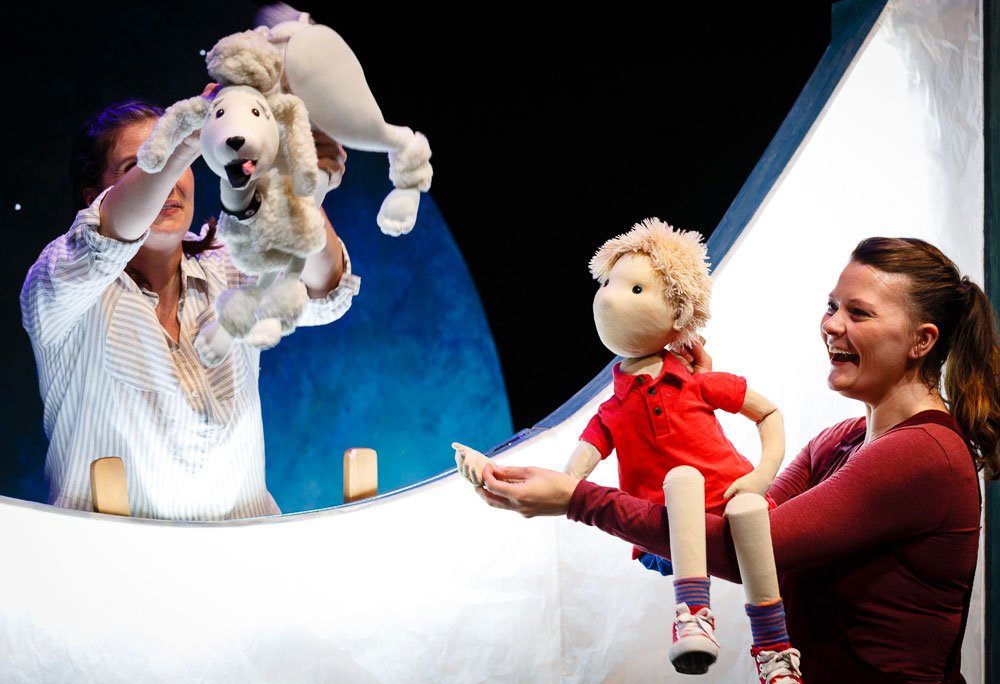 ‘Sausages are better than war’, proclaims the small boy in David Almond’s The Boy who Climbed into the Moon. It’s a certainly good idea – and ideas can change the world, according to Theatre Alibi’s soaring stage adaptation by the same name. Accompanied throughout by live accordion music and the mythically rare Hang drum, the three performers serve up just enough of the boy’s physical world to ignite a spark of wonderment, while completely resisting the urge to spoon feed their childish audience. The result is a firework display of mimed action and comedy that cannonballs us willingly into the story and away from any illusion of a passive Sunday afternoon nod off. This is the ethos of Theatre Alibi who strive to ignite the imagination of their young viewers, who are often removed from the storytelling altogether by a slurry of chatter and song (my words, not theirs). Children, and adults alike, need a moment to breathe and think for themselves.

Paul, our titular boy, gazes out safely from the hands of one who is both mother and puppeteer. The moon backdrops the tiny set as a giant, circus-inspired spinning disc. When night falls the disc twinkles magically to the soporific vibrations of the Hang drum. The coloured squares of light illuminate the tiny, chalky buildings, which are sturdy enough for both adults and their child-sized rod puppets to scale. Paul climbs the tallest of them, up and up to the 29th floor, where he touches the sky itself and makes a host of new friends. His hare-brained idea that the moon could just be a hole in the sky is not simply entertained, but celebrated by his new friends, a waggy, tongue-lolling poodle being one of them, and off up a ladder he scrambles to investigate. The huge moon shrinks to a shining street lamp sized globe that glows above the now miniature Paul who ascends the now comically small ladder – the sudden play with scale rivalling the surprises of our own imaginations. Children bubble with laughter and the performers smile, mischievous and knowing.

The light-heartedness and beauty of the main narrative is bittersweet against the melancholy undercurrent of war and loneliness. It’s a tale that doesn’t underestimate the intelligence of the child and is brave enough to broach wider themes. In doing so, The Boy who Climbed into the Moon holds the power to shape the way this generation will see the world – with endless possibilities, where mad ideas might just change the world.