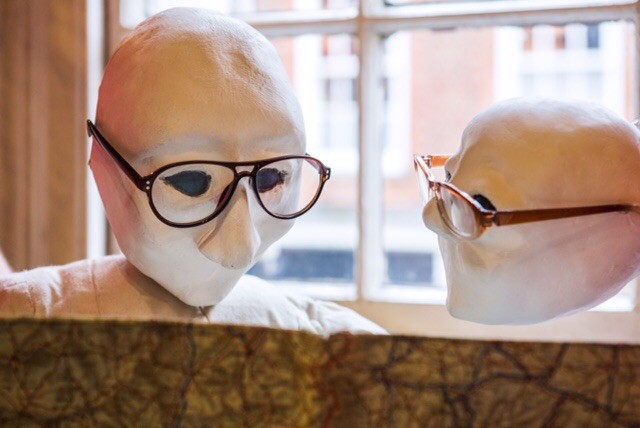 A collaboration between two small theatre companies – Little Cauliflower and Smoking Apples – 'CELL' uses puppetry, light, shadow and very few words to explore the implications of being diagnosed with motor neurone disease (MND). Through a series of often poignant and amusing flashbacks, it charts the slow deterioration of Ted, who can no longer speak or move but has a vivid collection of memories to draw upon in his darkest moments.

Ted is a large, pillowy white puppet, about five feet tall and operated by one to three puppeteers. Although he walks with an awkward gait that I think is as much a symptom of the puppetry as the illness, he is otherwise utterly convincing. His head, arms and upper body are manipulated with great skill and the black-clad puppeteers quickly melt away. We watch him pursue his stamp collecting habit with enthusiasm, develop a sweet and funny relationship with a rather demanding goldfish and, post diagnosis, make the decision to go travelling in Europe while he is still well enough.

As the MND slowly takes hold – Ted begins shaking, dropping things and gradually becomes confined to his chair – he retreats further into the memories he banked up during his trip. He particularly thinks of Annette, a woman he met in France. She is represented simply but effectively with just a white head and a single white hand. She is a creature of imagination and memory, as well as a solid fact. Their relationship is sweet, and gently plays out between the two puppets and also in delicate shadows on lit-up screens.

As the performance slowly unfurls over an hour, I find myself craving for Ted to narrate (he does this only twice, at the beginning and the end), or to hear him and Annette speak. Although the puppetry is adept, the purely physical approach somehow doesn't tell us quite enough. I often wonder what Ted is thinking and feeling; is he frustrated or angry or sad? That said, 'CELL' is an interesting and moving exploration of a debilitating disease with no cure, and puppetry seems the perfect medium with which to tackle the subject.

"CELL is an interesting and moving exploration of a debilitating disease with no cure; puppetry seems the perfect medium with which to tackle the subject."

We watched 'CELL' at the Pleasance, London. It is touring venues across the UK until 22 May 2015.