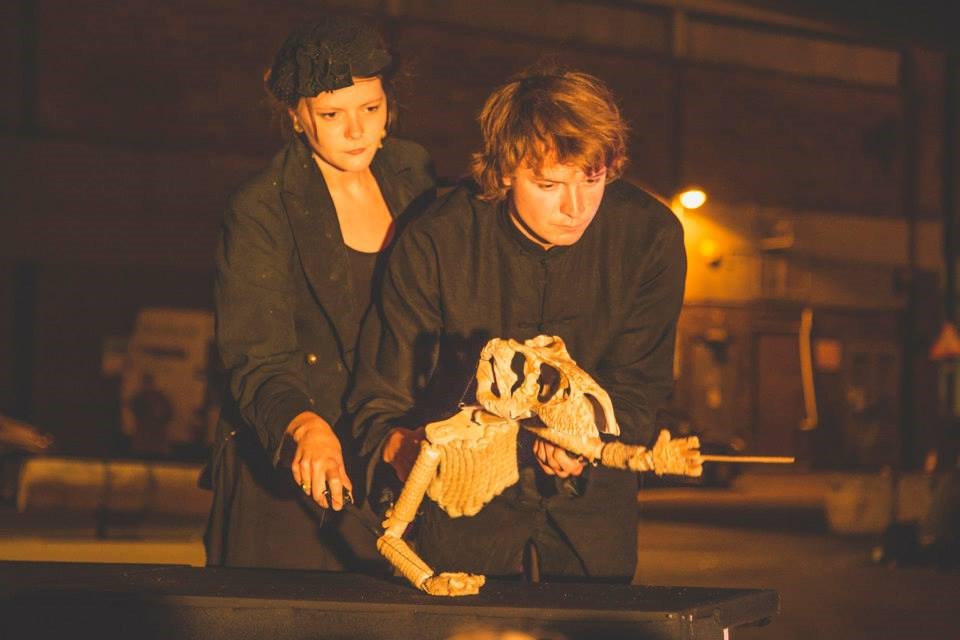 With dark and macabre yet comical themes, Death Puppet Klezma Jam is a fantastic mix of puppetry from London-based theatre company Mirth & Misery. The 30-minute show is delivered as a kind of mini showcase, with a skeletal puppet leading the proceedings as he waves a little conductor’s baton in his tiny hand. Puppeteers Sian Kidd and Stan Middleton are accompanied throughout by a talented four-piece band, Benny and the Cheesegrinder, who play traditional Eastern European music and really do put the ‘mirth’into this puppet company’s name.

Clever puppet designs and interesting methods of manipulation give Mirth & Misery a unique edge. Both puppeteers trained at the Moving Stage Marionette Company and make a highly skilled and fast paced duo onstage. A dance between two marionette coffins with little legs protruding is beautifully executed and spooky yet charming. A strange, two-legged tabletop puppet with cat-like movements is particularly inventive, its face looking like a doll’s head, which has been ripped open. Another standout moment is the combination of two different puppets which, when locked together, create one bunraku-style puppet.

The tabletop puppets are well crafted, their limbs decorated with pieces of beige rope, giving them a slightly muted palette in keeping with the bones and skulls, which feature throughout the show. Some of the marionettes are a little more colourful in appearance, including a tiny skeleton bird marionette with brightly coloured plumage.

The standout character is a skinny zombie marionette with one eye, protruding teeth, and torn flesh. As he shuffles about the stage, knocking on the lids of the mini coffin marionettes, it’s clear that much effort has gone into making his movements as ‘zombified’as possible, with pleasing results. This marionette gives a perfect example of how to blend musical accompaniment and puppetry, giving the zombie a huge range of expression as he 'sings' in a deep French voice.

Extremely entertaining and a memorable, Death Puppet Klezma Jam is a visual treat which will delight those with an appreciation for darkly comic humour.

"Extremely entertaining and a memorable, Death Puppet Klezma Jam is a visual treat which will delight those with an appreciation for darkly comic humour."

We watched 'Death Puppet Klezma Jam' during the 2015 Suspense Festival in London.