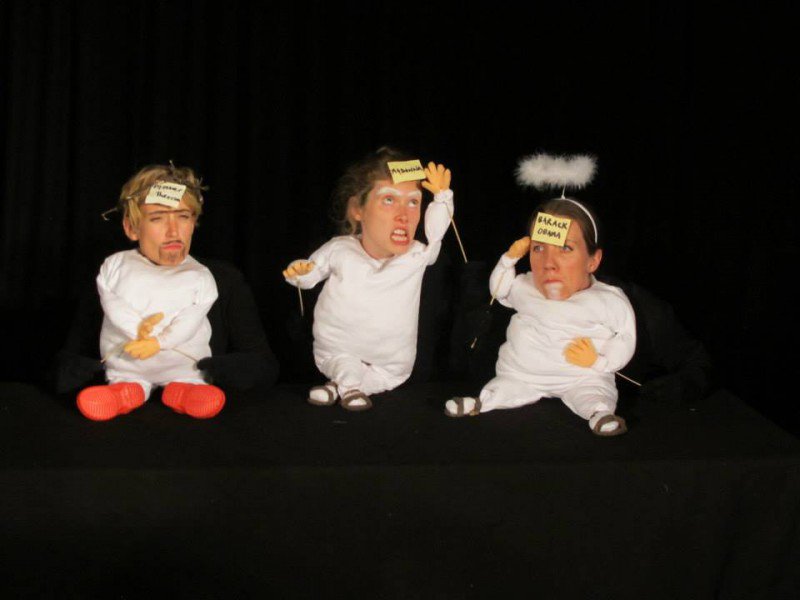 The Mimetic festival, a two-week celebration of European physical theatre, was held this year in the Vaults. Once a mortuary for rotten train parts beneath Waterloo station, the Vaults have been refurbished into one of ‘them places to be seen’, full of pop up bars, indie shows and surprising cinema. Underground theatre that’s literally underground, as it were. It is in this mole-pleasing locale that Moonymelty Theatre present their double bill of short plays, collectively entitled 'Divinely Human'.

The first of the two shows is a slice-of-life tale of a slightly bonkers family at Christmas. The hippy son has returned, to be constantly embarrassed by his senile dad. A loud-mouthed relative makes tit jokes at the slightest provocation. Everyone gets drunk and watches rubbish BBC Christmas programming. Ah, but I forgot to mention: this family is the Holy Trinity, with Jesus the Son, God the Father and the Holy Ghost (the one in the bathroom who uses gift books as toilet paper). The characters are presented via the use of humanettes: puppet bodies attached to the performers’ heads.

Clearly a lot of thought has been put into the choreography of the puppet bodies – objects are picked up, each character has their own distinct physical twitches and micro-movements (God gets very excited and likes to throw his arms about) and they even have a family dance, where the divine powers of levitation are put to entirely spurious use. The all-female company have tremendously expressive faces, and clearly enjoy working together. Their energy is infectious – the crowd laughs often and loudly. I, for one, was very impressed with the young woman playing God, who seems to have the slightly startling power to spontaneously become Peter O’Toole.

The second show of the evening is puppet-less, but no less surreal for it. Beginning as a sort of modern dance interpretation of the Central Line, the piece slowly morphs into an existential howl of pain and laughter concerning the state of modern social interactions. Very tightly directed, with periods given over to improvisation as the company, equipped with rictus grins and stiff handshakes, attempt to make nice with the audience by any means necessary. “We appear to be of the same gender!” declares one of the performers, nodding hopefully at a potential friend. Not as laugh-out-loud hilarious as the Holy trinity schenanigans, this show relies more on physical timing and conceptual play, bringing an audience into an unnerving but all too familiar world of desperation masked as camaraderie.

Neither show is much more than twenty minutes in length, but in that time they provide a healthy dose of laughs, talent and even ideas. Look out for Moonymelty and their succinct slices of sacrilege in the theatres and cabarets of England.

" I, for one, was impressed with the young woman playing God, who seems to have the slightly startling power to spontaneously become Peter O’Toole."

We watched 'Divinely Human' at the Vaults, London during the Mimetic Festival 2014.