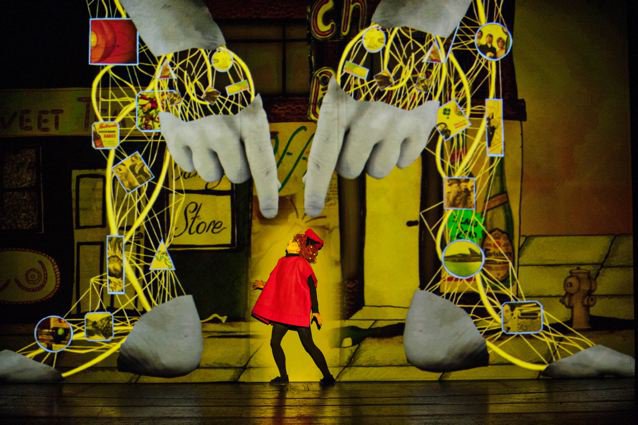 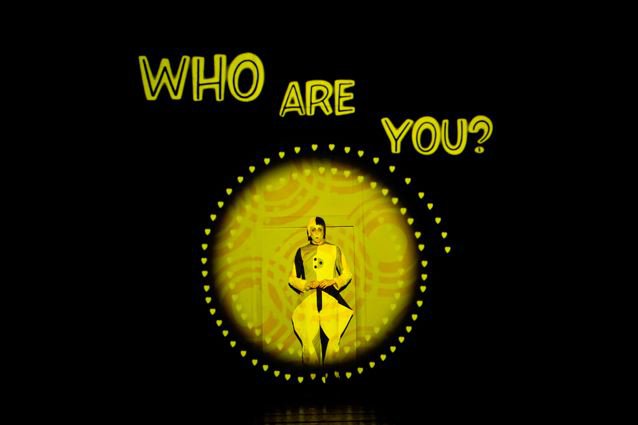 Hotly anticipated following the incredible success of ‘The Animals and Children Took to the Streets’, ‘Golem’ is what the geniuses at 1927 did next. Their run at the Young Vic has already been extended due to demand and expectations run sky high. It’s perhaps unfair to compare but we, of course, all do. To be brief about it: it’s the same style but a different story; the first one had the advantage of feeling unique.

The story here centres around a brother and sister – Robert and Annie, abandoned at a young age by their hedonistic parents – and their grandmother. She has brought the children up on a diet of Beethoven and anarchy; television is strictly banned. Now adults, Robert is a nerd and Annie is a punk singer. One evening Robert buys a golem from an inventor friend. Projected onto stage, the golem is a large clay man with an amusingly large penis who gradually turns the family’s lives upside down. Their beautiful eccentricities slowly erode away as the golem’s influence grows.

In Jewish folklore a golem is “an animated anthropomorphic being, magically created entirely from inanimate matter” (Wikipedia) – much like a puppet. It obeys your every command, thinks what you think, does what you say. In 1927’s play, Robert’s golem begins benign but upgrades into something much more sinister. Rather than Robert controlling it, it controls Robert, while letting Robert think he is in charge of his life. A golem is basically an iPhone.

Anyone who loved the distinctive filmic style and delivery seen in ‘The Animals and Children…’ will love the look of ‘Golem’. It has an equally magnificent aesthetic along very similar noir lines, the animated set providing a comic strip collage of visual excitement from start to finish. The acting is flawless; the choreography tight; the lighting and animation seamless, exciting and atmospheric. As a piece of visual theatre, it is a pure joy to watch.

The thing is, it’s rather depressing. That’s not a bad thing – surely theatre’s purpose is to make us think not feel good! – but brace yourself to emerge from the theatre feeling rather downbeat. Not because the story isn’t a decent one, or because the script doesn’t sparkle with wit and rhyme (it does and it’s delicious), but because of the damning comment it makes on our lives. ‘Golem’ is a funny but ultimately awful portrait of our willingness to give up liberty in exchange for material comfort, and offers no light at the end of the tunnel.

Rippling through the entire performance is 1927’s horror at the commercialisation of modern life, and the way we have all sold our souls to the smart phone and the tablet. The ghost of Edward Snowden quietly haunts this play, as do the vast corporate vistas of contemporary cities (the Olympic Village in Stratford sits opposite designer Paul Barritt’s studio). It’s a wildly and wonderfully visual play that’s ultimately about being blind. It’s a play about us all.

"The acting is flawless; the choreography tight; the lighting and animation seamless, exciting and atmospheric. As a piece of visual theatre, it is a pure joy to watch."

We watched this performance of 'Golem' at the Young Vic, London, where it plays until 31 January 2015.