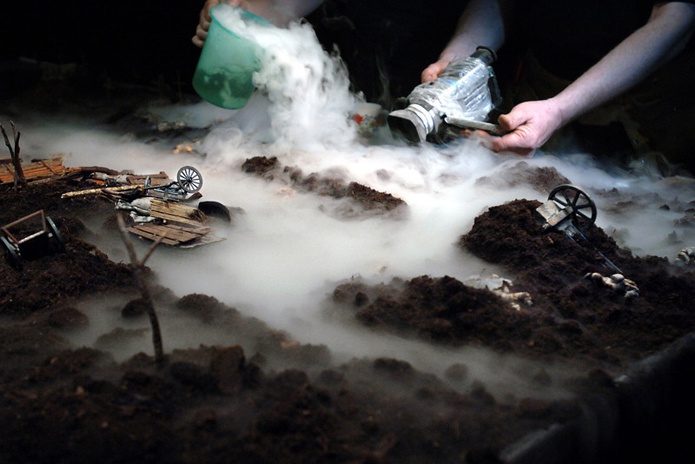 Two tattered boots squelch through the mud of no-man’s land, the lost and scared soldier’s feet repeatedly fighting the suction of the slurry. Through his eyes we see the rotting piles of corpses in the mud as he desperately looks for his trench. Amid the enormity of the First World War, for this moment one man’s struggle to survive is all that matters.

Hotel Modern’s fascinatingly imaginative and deeply moving depiction of WWI’s Western Front is littered with personal moments like this. The four performers on stage show us the devastation of the First World War through the eyes of those who fought it, often literally, using carefully manipulated point-of-view video feeds and puppets that navigate intricate sets accompanied by live foley and music.

Such first-person camera work is now strongly associated with the sanitised visions of war found in computer games such as Call of Duty. By contrast, Hotel Modern uses the first-person perspective in 'The Great War' to show unusual, sometimes partially occluded, personal views of the brutality of war: soldiers peer through slits in the sides of deafeningly loud tanks or watch through a periscope as a transport ship is torpedoed; all the time accompanied by the harrowing words of letters written by soldiers at the front.

These images are all assembled, manipulated and filmed on stage, in full view of the audience. Hotel Modern makes strong use of visceral materials: the mud of the battlefield is water-soaked compost and the explosions of shells real jets of fire that flare the video feed to near whiteout. The live video is projected onto a large screen, centre stage. Although it is interesting to see the construction and animation of the scenes on stage, the quality of the filmed image is so strong that it constantly draws the eye.

The performers hands are unabashedly visible in the video feed as they construct and destroy the many settings of the show: piling body on top of body in the mud. Rather than distracting from the reality of the images, their hands add to poignancy of the piece, becoming agents of fate constructing the situations that will lead to more bodies for the gruesome pile.

We watched this performance at the Queen Elizabeth Hall during LIFT 2014.