'The Greatest Liar in All the World' – Familia de la Noche 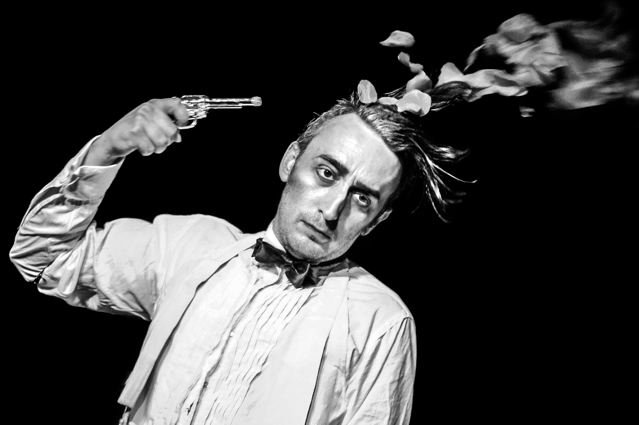 Not a puppet show but one of many performances with puppets in it at this year's Mimetic Festival, 'The Greatest Liar in All the World' is a darkly comic riff on the Pinocchio story for adults. Sporting heavy eyeliner, scruffy black tie and crushed velvet capes, Familia de la Noche's five person ensemble set a gothic mood for our “prince of porkies” to embark on a spot of cathartic truth telling. He is solidly human but we delve into his more wooden past.

The first shocking truth about Pinocchio is that he was born not carved. The unwanted result of a tryst between a woman and a stick, he is born in secret and abandoned immediately. Our protagonist begins life as a skinny wooden puppet with a light, papier mache head. He has a fixed quizzical expression and pursed lips. Pinocchio is briefly adopted by an Italian with a whittling problem (Geppetto), who helpfully swaps one of his legs for a wooden spoon dooming him to walk in circles.

This disability leads to a rescue and the beginning of an ill-fated romance between the wooden boy and a brilliant, tiny clown in a powder blue dress. The story that unwinds from here features a particularly well performed fox and cat who both have a decidedly nasty streak; some gruesome hessian masks that transform the wearers into a pig, a chicken and a donkey; a military caper and a great escape; plus some fast but attractive shadow puppetry.

There's suicide, abandonment, lost love and broken hearts. The puppetry is necessary for the story – and the three-person puppeteering of Pinocchio is perfectly good – but it's the humans that are most engaging to watch, with their exaggerated expressions, clowning about and, ultimately, their touching loyalty to the human Pinocchio. This is a piece of macabre and energetic storytelling for grown-ups that has some surprisingly poignant parts amongst the humour and the horror.

'The Greatest Liar in All the World'
Familia de la Noche

"This is a piece of macabre and energetic storytelling for grown-ups that has some surprisingly poignant parts amongst the humour and the horror."

We watched 'The Greatest Liar in All the World' at the Vaults, London during the Mimetic Festival 2014. It plays at 8pm until 22 November and the festival runs until 29 November.