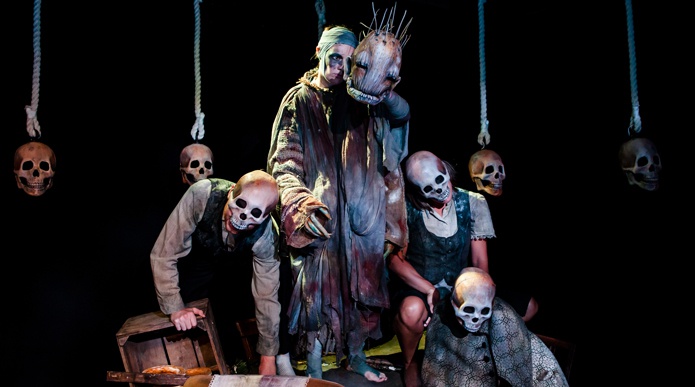 The premise and opening of 'HAG', the second show by The Wrong Crowd, are enticing. We meet Baba Yaga, the cannibalistic horror-figure of Slavic myth – a full-body puppet with freely-operated head – in her lair of gnarly roots, glowing skulls and an ominously incongruous gas heater. With the help of some skull-headed dead children, she’s going to tell her side of her stories – a delicious prospect, narratively, politically and morally.

Unfortunately after this things go wrong, technically and tonally. Baba Yaga slips out of focus in favour of Lisa, a girl who lives in an episodic mash-up of fairytales. This becomes structurally unsatisfying. The stories feel generic and the characters more so, especially the wicked stepmother and the cliché yoof-speak ugly sisters.

The Baba Yaga puppet is stunning but not well operated, far too often just nodding along with the text and slack-gazed – there is potential for so much more with this figure. The bewigged half-masks of the step-sisters work well when worn and when allowed confidently to be puppets, but much less so in an inbetween state when they’re snatched at for the odd line.

The puppetry of Lisa’s talismanic doll, mainly by Theone Rashleigh, is haunting and nicely detailed. Although perhaps as puppeteers we could all agree a moratorium on the ‘brushing oneself down’ action when a puppet arrives on stage?

The human physicality feels underpowered and Sarah Hoare’s one-note shouting verbal delivery as Lisa eventually made me wish Baba Yaga would hurry up and eat her. There’s a moment of exquisite harmony singing, but it comes and goes from nowhere; the show can’t decide on the level of gore and scare to play, or the level of psychological reality in the writing.

‘HAG’ has some great ideas and high production values, and The Wrong Crowd, after their first smash-hit show ‘The Girl with the Iron Claws’, have a loyal audience. With a firmer directorial grip and some technical tightening, hopefully they can extract the good show I suspect is lurking within this one.

The research and development of 'HAG' has been supported by The Unicorn Theatre and Bristol Old Vic’s Ferment.

"‘HAG’ has some great ideas and high production values... With a firmer directorial grip and some technical tightening, hopefully they can extract the good show lurking within this one."

We saw this show at the Underbelly during the Edinburgh Fringe 2013.