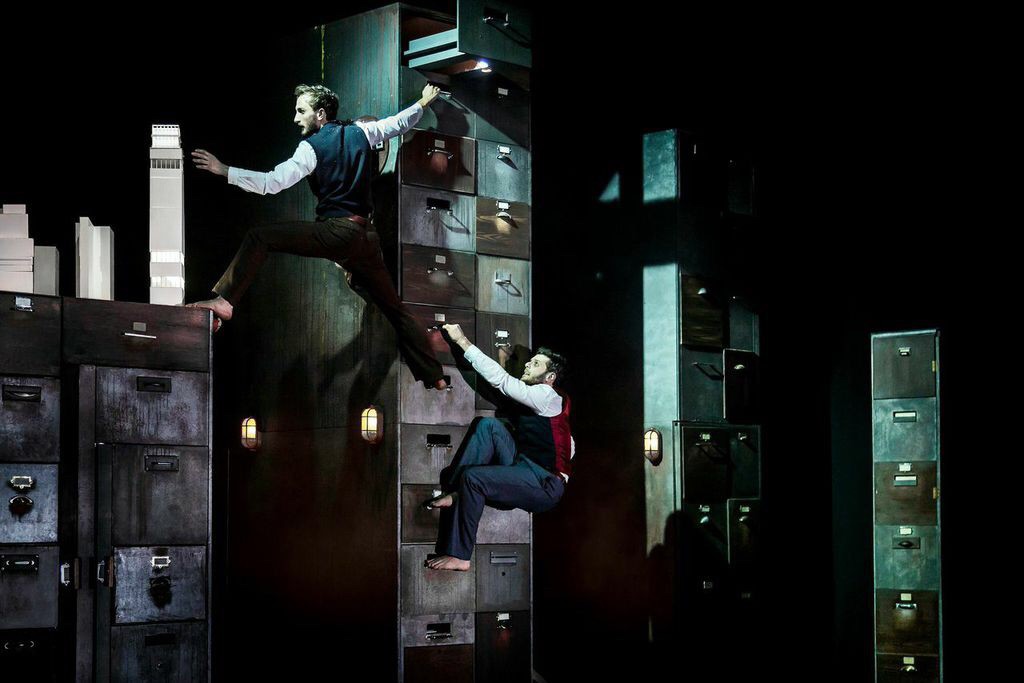 In Gecko’s latest piece 'Institute', four anguished men are imprisoned in a vast industrial repository filled with monumental filing cabinets. This memory storehouse evokes sanatorium and laboratory with warning lights and alarms constantly being triggered by infringements of the rules. Two of the men, Martin and Daniel, are inmates and subjects of experimentation. The other two, Karl and Louis, are the doctors. The divide between doctor and patient becomes increasingly blurred as the ‘care’ moves from the isolation of the inmates to punishment and humiliation.

Daniel (Chris Evans) is a young architect destined for great things who cannot now face the world or his work. Evans is an exquisite performer who manages to communicate a fragile inner life with well-judged poignancy. Martin (Amit Lahav) refuses to accept the demise of his relationship with Margareta and is initially a more comic presence, a shuffling, inarticulate Englishman attempting to be a lothario. At the heart of the piece is the tender camaraderie between Martin and Daniel who are compelled to repeatedly relive their most painful memories. They escape into a series of exquisite dance duets to music that echoes an English country-dance.

The puppetry is magnificent and dynamic throughout. At the start of the piece the audience is gently amused when Martin animates a pair of hands that create the memory and presence of his love Margareta. Towards the end when the same character is shackled to four long poles that control his movements you witness his struggle to be normal. The image is of a man in terrible psychosis where the divide between intention and execution has been shattered. The effect is devastating.

The work defies narrative structure and, although all the elements are virtuosic, the episodic nature of the piece becomes slightly monotonous and repetitive. At times the music and sound design are heavy handed and there is an overload of visual metaphors. There are just too many incredible images to mention and in the end the moments of stillness, silence and simplicity are the most striking. Notably the ‘real’ Margareta watching her ex-lover in psychological torment is the tangible reality that provides much needed counterpoint. The finale is hard hitting, emotional work that pulls no punches. The final dance trio smothered in orange backlight and haze is simply stunning.

"The puppetry is magnificent and dynamic throughout."

We watched 'Institute' at the Royal Opera House's Linbury Studio during the London International Mime Festival 2015. 'Institute' is touring to Lighthouse Poole on the 24-24 Jan and to Hall for Cornwall on 30-31 Jan 2015.