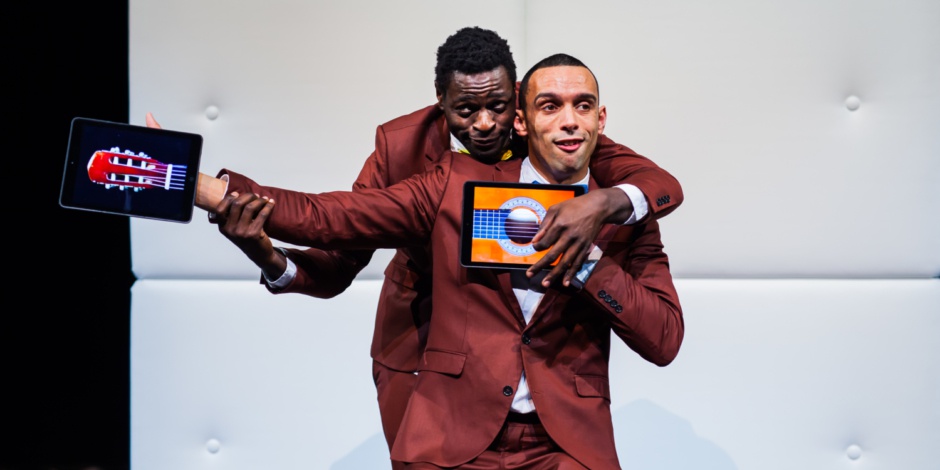 'Where are the puppets, anyway?' demanded my almost three-year-old, half way into BonteHond's iPet. It's an understandable question, particularly from a toddler, but one of the key features of Bristol Festival of Puppetry has always been a willingness to challenge audiences' ideas of what puppetry might be. In iPet, the iPad itself becomes a puppet or avatar, a tricksterish presence that both facilitates and undermines the efforts of the human characters and ultimately threatens to destroy the world of the show itself.

The show in question is a largely wordless mix of technologically-enhanced sleight-of-hand magic, physical comedy and clowning, performed here by the charismatic duo of Michiel Blankwaardt and Erwin Boschmans. Blankwaardt is all eager-to-please diligence and occasional panic, Boschmans all likably smug self-assurance – both deliver kinetic, high-energy performances that avoid the pitfalls of excessively chirpy children theatre and seem to genuinely engage the large, all-ages crowd. Both sleight-of-hand magic and live interactions with digital displays rely on an absolute precision to be genuinely jaw-dropping; this was entertaining rather than astounding, though I'm not sure any of the children minded.

While there was a loose narrative arc to the piece, it did not take centre stage in what often felt like an entertaining collection of turns. I found myself wanting a bit more thematic consistency, as the climax of the piece dealt effectively with some complex and timely questions around our increasing reliance on technology and how it might be shaping our perception of the world. Anyone who has watched a child try to reach behind a screen to make contact with a loved one will appreciate the very real anxieties the show speaks to in its most interesting moments.

All that aside, it seems most appropriate to give the last word here to someone from the target age group, my five-year-old who spent the show perched on his seat for the best view, whispering about the tricks and laughing: 'I liked it'.