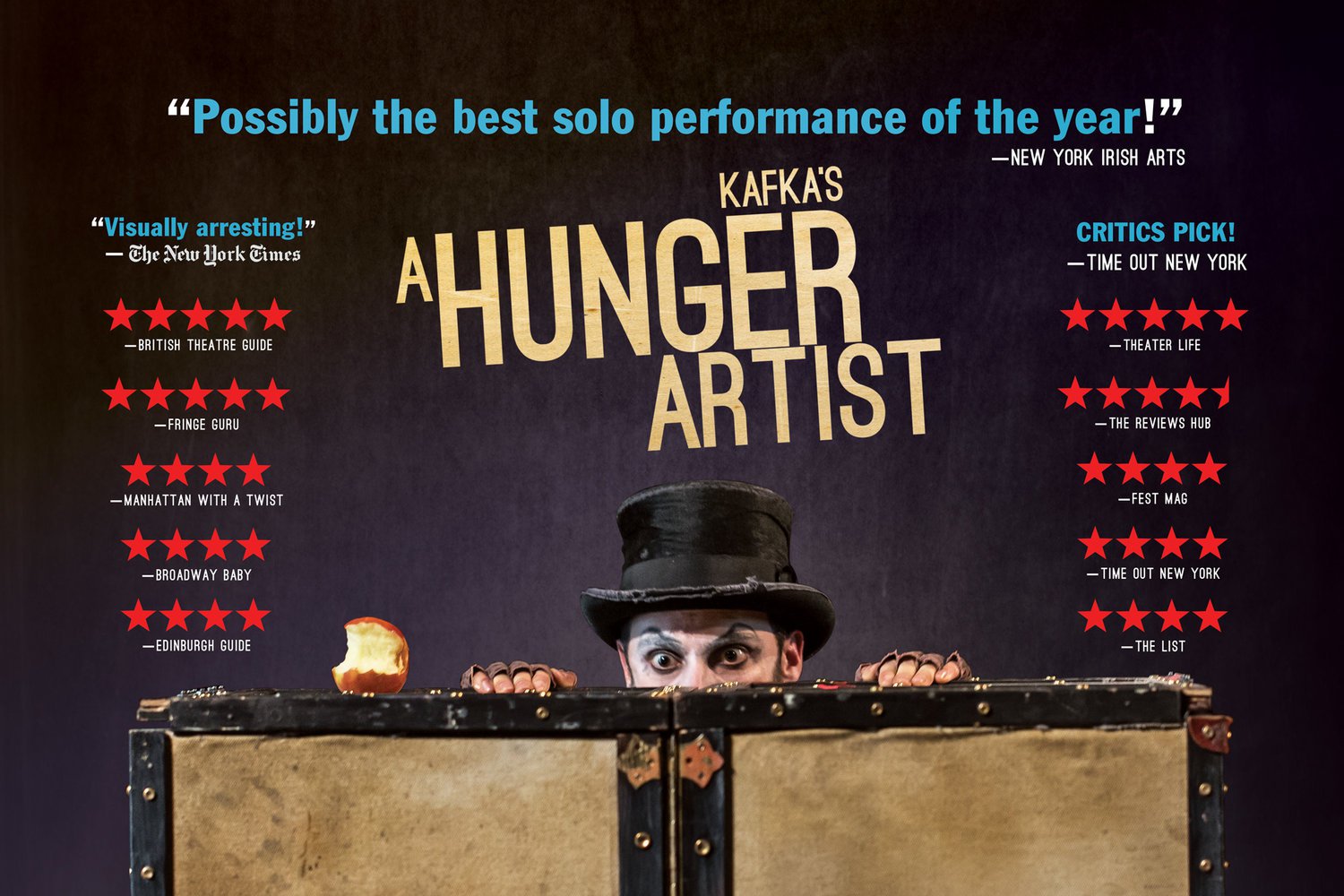 The Hunger Artist, The Impresario tells us, is a theatre act where the performer confines himself in a cage without eating or drinking for 40 days. The Impresario is a fat man wearing a tired-looking Victorian cape and a top hat, presenting the story using a classic Pollocks-style Toy Theatre. Then, dissatisfied by the tiny scale of his show, he invites members of the audience on stage to recreate the same scenes as in the toy theatre. And whilst setting up, Levin strips down and becomes the skinny Hunger Artist in a cage. The chatty Impresario, cape and top hat, are now hung on a coatstand, with a recorded voice.

The more the Hunger Artist performs, the more his popularity declines, and people begin to suspect his act is a gimmick. He becomes violent and discontented by the length of starvation, that in fact 40 days is not long enough, when he then meets a circus Ring Master - a suit and straw hat on another coatstand. In a memorable sequence, Levin slips both arms into these characters’ costumes and the Hunger Artist becomes the object of both their ambitions. He is pulled from side to side as the Ring Master and Impresario compete to get the Hunger Artist to sign their contract. Meanwhile the Hunger Artist himself remains voiceless.

On joining the circus, The Hunger Artist finds himself in a cage outside with the rest of the circus animals. Finally he can fast for as long as he likes and his body slowly diminishes into the straw floor. The Ring Master, seeing an empty cage, finds a shrunken puppet body there instead. As the Hunger Artist dies he tells the Ring Master that he should not be admired and reveals the enigmatic and philosophical reason for his ‘act’. Then he is replaced by a black panther and a new crowd begins to gather.

Kafka’s ‘A Hunger Artist’ is an innovative piece of physical and visual theatre, drawing together many theatre crafts to convey the story whilst working with the restriction of having only one person on stage. It is very satisfying to see puppetry and object theatre used alongside shadow, movement, mime and verbal storytelling. It is evident that director Joshua William Gelb went to great lengths to carefully hone and craft the play’s relationship with the audience, taking us on every ebb and flow, and constantly changing the storytelling elements to create a dramatic landslide that carries us to the bleakest of endings. It’s hard to believe that this compelling theatrical journey was conducted by only one man.

Thanks to adaptor Josh Luxenberg, the absurdity of Kafka’s work remains to haunt and puzzle us in equal measure, leading us to question every metaphor in the story. A highlight for me was the scene with the two coats, which was beautifully performed. It proves how strong puppetry can be as a storytelling tool and how it can shine when used to serve the story and drama. An enriching 60 minute experience.

'It’s hard to believe that this compelling theatrical journey was conducted by only one man.' Aya Nakamura