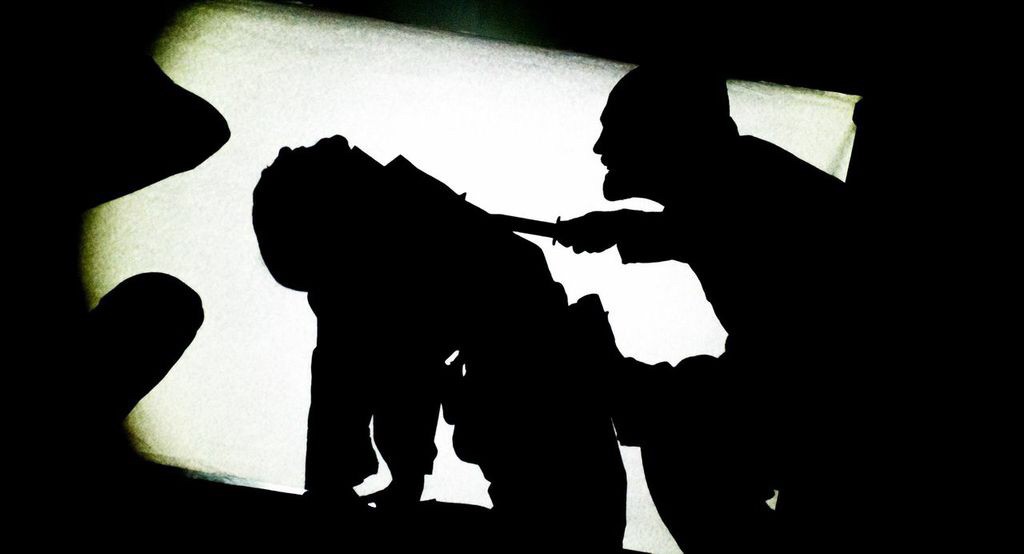 Theatre Ad Infinitum's pacy new show takes us on a journey into a dark, dystopian future where we have gone beyond the smart phone and embraced the implant. Using no set and barely any props, the company cleverly uses brights lights and deep darkness to construct a terrifying future where everything we ever think of is collected as data.

The invasive new implant technology will apparently free people from terror, crime, any evil you like. Except torture by the authorities of course. The implant isn't optional but if you have nothing to hide you have nothing to fear. Sounds strangely familiar... 'Light' was inspired by the revelations of Edward Snowden and starkly explores a possible outcome of our willingness, or otherwise, to give up our personal information.

The show is technically brilliant. The actors use torches and LED strip lights to create the futuristic landscape they move through. Little red lights cleverly show thought data being sent and captured; green lights represent freedom from being watched. A dirty red light indicates we are in someone's 'mind space'. The humble torch becomes a star here, casting fantastically atmospheric beams of light that pick up every dust particle swirling on stage.

The sound design (by Chris Bartholomew) is equally powerful and incredibly effective – both the sound effects and the music. The actors are completely in sync with the sound, which adds the essential extra layer to bring their world to life. The cast are brilliant mimes, convincingly occupying the light and sound space they create, and communicating without spoken words. There are voiceless shouts, sometimes deciphered by surtitles, but most of the meaning comes from their stellar movements.

The enveloping darkness that hides the hands behind the moving lights is a vehicle for a kind of puppetry – the actors manipulate the beams and tiny handheld lights in way that gives them independent life and new meaning. A torture scene behind a white sheet uses shadow play to powerful effect, illustrating psychological torture especially well and recalling the catalogue of techniques used by the CIA and recently made public. This is a vision of the future but it is very much rooted in the present, a present where David Cameron is currently pushing for the police and secret services to have even more access to our data.

Within all this is the story of a relationship breakdown and a soap-opera style revelation about who an agent's mother is. In itself the story isn't groundbreaking stuff, but as a piece of visual, physical theatre you will be gripped. Director George Mann says he was "filled with a sense of urgency to make the play", describing it as a way for him to "express his deep concern about the kind of society we are sleepwalking into." He does a good job. I recommend watching 'Light' in conjunction with 1927's 'Golem' (the delivery is completely different but the message strikingly similar) and 'Citizenfour', Laura Poitras' Oscar nominated documentary. It would be a triple bill of viewing pleasure but one that would really make you think.

Director George Mann says he was "filled with a sense of urgency to make the play", describing it as a way for him to "express his deep concern about the kind of society we are sleepwalking into."

We watched 'Light' at the Barbican during the London International Mime Festival 2015. It tours to venues across the country until 16 Feb. Tour dates are on the Theatre Ad Infinitum website.