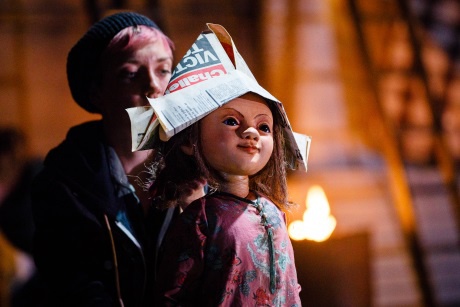 Since watching this richly engaging show at the beautiful Bristol Old Vic Theatre my nearly seven year old son has been re-enacting his favourite characters and plot twists. This piece clearly made a huge impression as, in turn, he becomes Thumbalina riding a bottle pulled by a butterfly, a swallow fighting a mole and a courtier chanting ‘winkle… bottom… winkle… bottom’.

This elegantly told set of classic stories is set in a contemporary war torn world, where the rich and well fed rub shoulders with the homeless and destitute. The starving match girl, borrowed from Hans Christian Andersen’s darkest story, is our focal point and buys stories from spats wearing Vaudevillian Ole Shuteye and his motley crew of acrobats and musicians. These characters dwell in the back alleys and building sites hidden away from the view of passers-by. As ever a good story can keep you warm and nourish your soul and the shivering match girl is all too eager to trade her matches for tales. Niall Ashdown’s Ole is a wonderful storyteller full of humour, skill and ease and draws the puppet match girl, beautifully played by Edie Edmundson, into each tale. The sustained life and ardent belief expressed by this small child puppet is extraordinary. Edmundson’s skill and subtlety as a puppeteer is exquisite and the little girl grows in forceful determination as she moves towards her inevitable death.

Even sad tales must be told to children and darkness is everywhere in this piece. As the house lights dim we witness the little match girl nearly falling prey to a predatory man. There are scenes of domestic abuse in the shape of Guy Hughes’s revoltingly creepy mole enslaving Thumbalina. This story moves inexorably towards the saddest possible ending and Joel Horwood and Emma Rice don’t even give the match girl the image of a grandmother in the afterlife to comfort her. Watching the little match girl die was genuinely moving and equally painful was seeing her motley crew of magical storytelling friends revert to being the ‘invisible’ homeless. My nearly seven year old son is in a dark phase and loved the tone of this piece of storytelling but by the interval even he was asking where the promised ‘happier tales’ had gone.

After the interval there was welcome silliness in the shape of ‘The Emperor’s New Clothes’ which made the Little Match Girl giggle with delight. Guy Hughes and Katy Owen’s terrific double act of effete fashion criminals was hilarious and the courtier’s (played by Karl Queensborough) reaction to the naked Emperor was absolutely priceless.

This show is a glorious smack in the face: the cold truth and cruelty tempered with delightful humanity and lots of irreverent laughter. It is a visual and musical feast, the ensemble are hugely skilful at bringing detail and joy to each crafted moment. Watching this show in modern Britain where homelessness and inequality are on the rise is rightly sobering. Yes there is joy, fun and escapism but this is a salient and unsentimental reminder of the harsh realities of life.

"Yes there is joy, fun and escapism but this is a salient and unsentimental reminder of the harsh realities of life."

This show is still in Bristol till the 14th January so catch it whilst you can.