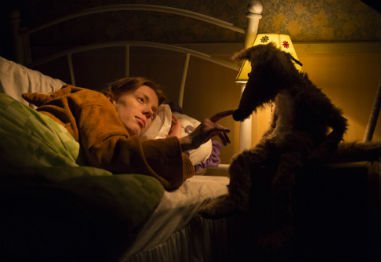 This was a Little Angel Theatre Production, featuring a solo actor-puppeteer, Charlotte Croft, a set designed by Alison Alexander, with music by Adam Pleeth and lighting by Luis Alvarez. Jimmy Grimes directed the show and is to be congratulated on assembling a remarkably talented team. Particularly impressive was the lighting by Alvarez. And Pleeth’s music. And Alexander’s set design. And.. and… and…

The main burden of the performance fell on the shoulders of the solo performer: Charlotte Croft. She told a story written in rhyming couplets of a fox-ish wolf or wolfish-fox misunderstood and ill-treated by the world. While Croft played a little girl in plaits who had all the best lines (actually all the lines) without a single stumble, and a pretty, oldfashioned doll played a more recognisable Red Riding Hood, the audience made some effort to keep up with the story. To hold our attention for three quarters of an hour listening to the same voice is not an entirely impossible task (‘ask’?), but it is necessary for the narrator to vary the tone and mood of his/her delivery as much as possible. Croft was pretty good at this variety, but the verse and the slight complication of the unfamiliar plot demanded more. She is a talented player and I believe her capable of meeting this demand with a little more rehearsal and direction.

Visually the production was colourful and the staging served the story very well. It’s an entertaining show, which the young audience of 7 years and upwards clearly enjoyed.