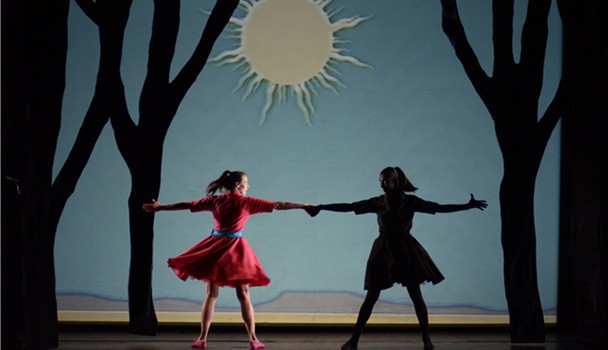 ‘Malasombra’, from Spanish Au Ments Dance Company, is a collaboration with award winning cartoonist Max Bardin, and intertwines uncomplicated live choreography with shadow and projection imagery, to play out a cinematic fairy tale.

A great children’s introduction to the possibilities of contemporary dance, ‘Malasombra’ wordlessly tells the story of La Chica (Magda Tomas) and her shadow (Caty Carrasco). We see their close bond, and the lengths they will go to in order to reunite, after a dark wizard - Malasombra (Tomeu Gomila) - kidnaps the spritely shadow and forces her to work in his magical factory.

Every detail in the design of this show has been well thought out, especially the charming costumes, that animate with the movement of their dancers and free the shadow character from a life behind illuminated canvas. The scene-setting choreography is not sophisticated, but clear and easy to understand. With the appearance of the ominous Malasombra, the story becomes gripping.

He is a genuinely creepy baddy, who stalks the forest looking for shadows to enslave, and the tale becomes dark and scary in the delicious way that a good fairy story should. We never doubt that love and friendship will triumph in the end.

What makes this show remarkable is the slick layering of depths and perspectives in the swiftly shifting shadow realm, and the easy transitions they make onto the physical stage. A chase scene is tense and dramatic; Malasombra’s sly trickery is despicable as he takes on human form; the city of illusions that he creates for his trapped prisoners is perfectly intangible, flitting across the back screen in a maze of streets and switching topography.

The plot and style appear simple, but are never dumbed down, and achieving this level of clarity in such a technically demanding show is impressive in itself. Interactions with the flat cartoon projections aren’t always as successful but, taking the art of shadow performance far further than the likes of Britain’s Got Talent winners Attraction ever attempted, ‘Malasombra’ is a startling revelation of this kind of animation’s full theatrical potential.

"What makes this show remarkable is the slick layering of depths and perspectives in the swiftly shifting shadow realm, and the easy transitions they make onto the physical stage."

'Malasombra' is playing daily at 2.40pm at Summerhall until 24th August (except Tuesdays) during the Edinburgh Fringe 2014.