'The Marked' by Theatre Témoin 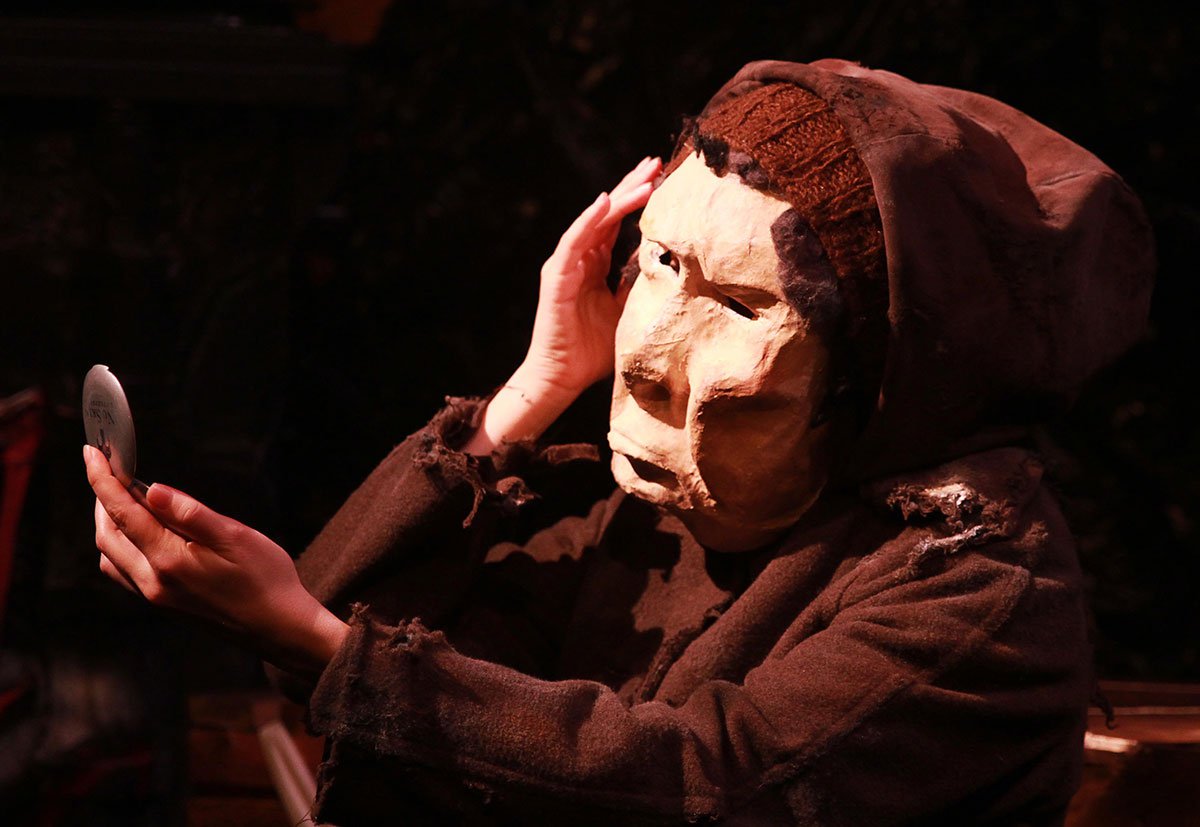 The Marked is a powerful infusion of mask, puppetry, sound design, and poignant, harsh reality portrayed through evocative surrealism. Based on real stories of homelessness, the narrative follows Jack (Bradley Thompson) and his struggle to overcome the burdens of his childhood. He meets Sophie (Dorie Kinnear) and her partner Pete (Tom Stacey), who seem to be on the run from the law, also living on the streets. Jack instantly takes a liking to Sophie but their exchange is quickly thwarted by Pete’s aggressive nature. Jack recognises that Sophie is in danger and tries desperately to free her from the demons that consume her, and in doing so confronts his own.

The show opens with a beautifully crafted and endearing pigeon puppet - a friend to Jack in dark times. The mechanisms of the rod puppet are intricately built by Peter Morton, and manipulated masterfully by the actors on stage, with operable wings, mouth, neck and head, producing warm chuckles from the audience. Suddenly, we are catapulted into a very different world - an ominous masked figure with a sunken face and streams of red running from her eyes. She brandishes a glowing bottle of wine, illuminated by harsh, piercing sounds of broken glass. This powerful and harrowing image so early on in the show sets the tone for the rest of the performance, keeping the audience on the edge of their seats for the possibilities of the horrors to come.

Addiction is a major theme in the show - the crux of the character’s troubles. Theatre Témoin tackle the subject courageously - through a mixture of stark realism and symbolic personification. In The Marked addiction lives - it has a physical form - and it is completely terrifying. My eyes were glued to the stage as the oozing, grotesque figure emerged - a ruthless puppet master, shadowing it’s victims. This hits home how controlling and powerful addiction is - it can change people, make them do things they would never consider doing. Equally as important, The Marked discusses the qualities which must be manifested to beat the disease, or at least start the path to recovery.

One of the strongest elements of this show is that the mask and puppetry are essential to the narrative and symbolism, they are not an added after-thought. The beautiful, emotive masks of Grafted Cede Theatre are used equally to horrify and to move the audience. Sometimes the masks highlight the otherworldly nature of the characters, and at other times they strip back all embellishment and pinpoint raw humanity. Puppetry is used brilliantly too - as a window into Jack’s childhood, helping distinguish between the past and present through some beautifully staged moments. The mask and puppetry allows the audience to connect with the characters, atmosphere and themes so strongly and I really enjoyed seeing mask and puppet interact in such a way.

I can’t recommend The Marked enough. This slick, heart-wrenching show utilises mask, puppetry and brutally honest storytelling to warm, tickle, terrify and shock the audience - I spent the whole show either jumping out of my seat, or crying. I would watch it again in a heartbeat, and defy anyone not to be touched by the strong messages in this visual feast.

'I would watch it again in a heartbeat, and defy anyone not to be touched by the strong messages in this visual feast.'