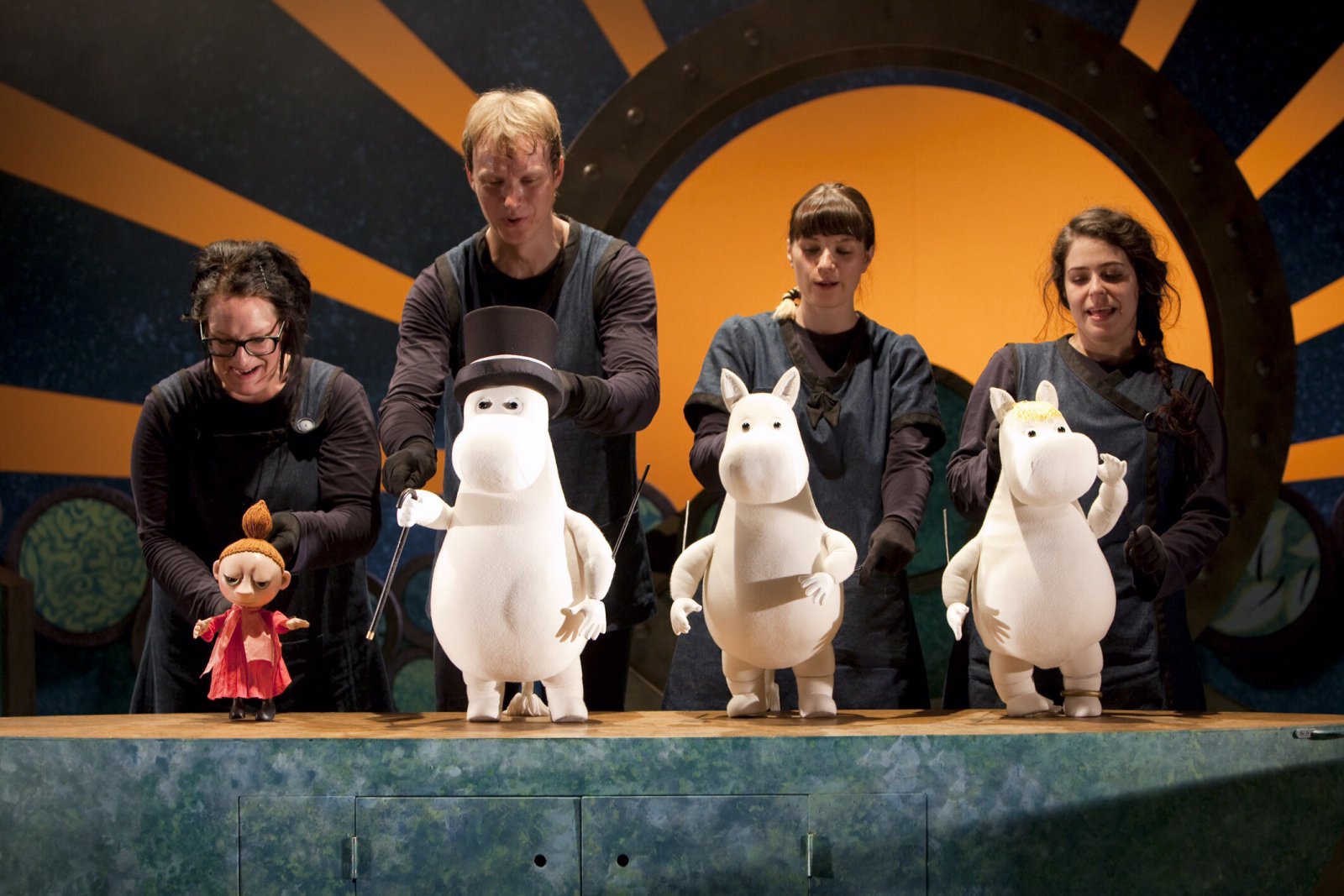 Starting as a series of delightfully illustrated books for children by Finnish author Tove Jansson, the Moomins have since become one of Scandinavia’s greatest and most perplexing exports. They are household names in many parts of the world (they are big in Japan!) but remain niche in much of the English speaking sphere. So, how does Polka Theatre’s adaptation of Jansson’s fifth Moomin book 'Moominsummer Madness' do as an introduction to the wonderful world of Moomin?

Curiously, I was not the only one asking the basic question “What is a Moomin?” A young boy sitting next to me put that same pointed query to his mother about two minutes into the show. Unfortunately, by show’s end I’m still not quite sure what they are meant to be. In appearance, the Moomin seem to be a family of albino rhinoceroses. There is Moominpapa, Moominmama, Moomintroll, Snorkmaiden and, perplexingly, a little girl called Little My who, aside from being of an entirely different species from the rest of her family, is also a spinning nugget of such explosive energy it probably borders on the pathologically psychopathic. She is inevitably everyone’s favourite character.

Setting aside all explanations and exposition, Polka chooses to start the show with a delightful song, setting up the Moomins and their home as one of those perfectly idyllic valleys only found in classic children’s literature. Every Moomin has his or her own idiosyncrasies: Moominpapa is always thinking of food; Moomintroll is friendly and curious; Little My needs to cut down her sugar intake. The rod puppets are lovingly crafted and performed, and the set is simple yet incredibly charming – full of lush greens and gentle, warm light. I found myself staring into it during the interval, trying to appreciate every single detail.

The story is simple: there is a sudden flood, and the Moomins are forced to relocate to a mysterious theatre that has floated by. From there they are separated, and Moominpapa must unleash the frustrated playwright within to reunite his family.

Appropriate for its title, much of Moominsummer is akin to a pleasant, summer evening ramble through the forest. There is much to see but, sometimes, the narrative becomes a bit unfocused and saggy, particularly in the first half, which may suffer from a random episode too many. Yet the second half is a tighter beast, bringing several disparate elements together into a funnier, leaner story that is wonderfully surreal. For example, in a story about theatre, we had to have the pantomime lion. Yet it’s a quiet sort of genius that offhandedly observes that the lion is performed by two beavers. We never see the beavers, but knowing they are there adds a whole new level to proceedings.

While at times I found it a bit too relaxed and cheerful for even a children’s story, the lovely puppets, exquisite mise-en-scene and hilarious little details of action and characters (Little My really will need professional help at some point) make this a fine introduction to Finland’s gift to the world. Just don’t ask me what a Moomin is: I still couldn’t tell you.

"The rod puppets are lovingly crafted and performed, and the set is simple yet incredibly charming – full of lush greens and gentle, warm light."

'Moominsummer Madness' plays at the Polka Theatre, London until 16 August 2014.