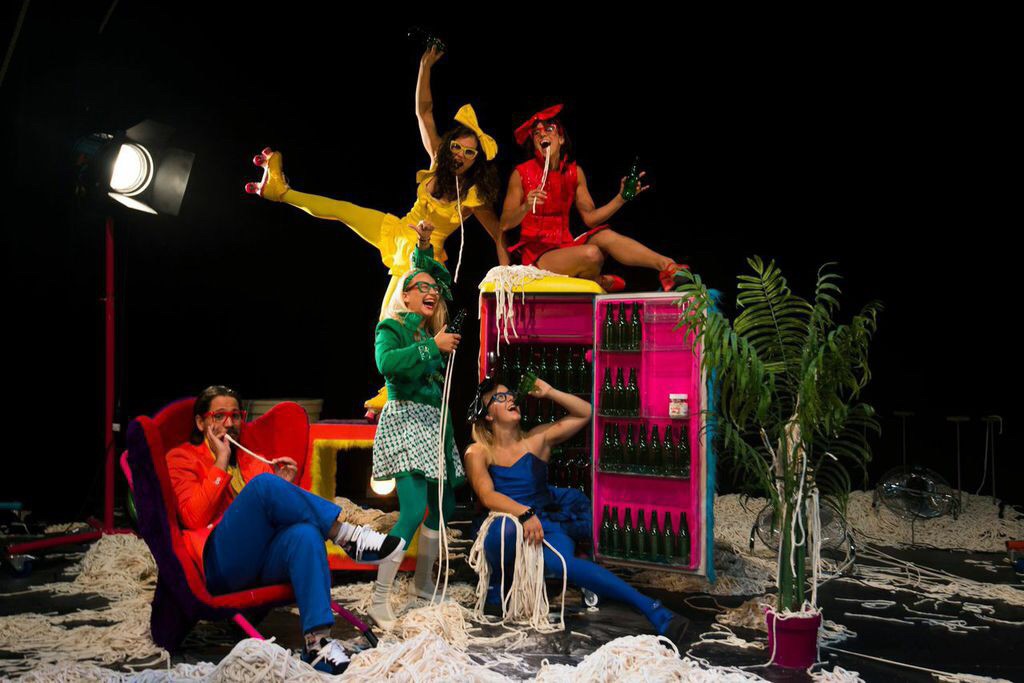 NoFit State Circus team up with Maksim Komaro to present a most bizarre production at the London International Mime Festival, where five pop-art colour-coded characters share a compulsive obsession with noodles.

‘Noodles’ is a unique pastiche of sketches and sometimes innovative circus acts in which the cohesive element is none other than a staple food. Miguel Muñoz Segura is the only male performer and the odd character in the feast of fools, serving as a sort of red thread throughout the production. He appears intermittently playing a series of magic tricks that make the pasta filaments appear and disappear, multiply or turn into a burning candle.

The noodles in question inundate the stage in various forms. Amongst the chaos of food battles, the cotton threads that represent the pasta filaments are transformed into different shapes and forms that depict brief images of hilarity: noodles are eaten, regurgitated, played with and even smoked. The performers get entangled in labyrinths of noodle-like ropes while performing some frantic aerial dances, or get buried in mountains of spaghetti and even become the object itself, contorting their bodies around handstand blocks and sprung tight-wires.

Although the pacing is fast and varied, some of the action feels repetitive and the show is resolved in a sort of anticlimax, whereas maybe the possibilities for puppetry in bringing the protagonist object to life could have been explored further. At any rate, despite the lack of narrative and coherent structure, the company present accomplished individual performances in a fun, light-hearted and honest show that leaves the audience with a feel-good sensation.

"Noodles is a unique pastiche of sketches and sometimes innovative circus acts in which the cohesive element is none other than a staple food."

We watched 'Noddles' at Jackson's Lane during the London International Mime Festival 2015.