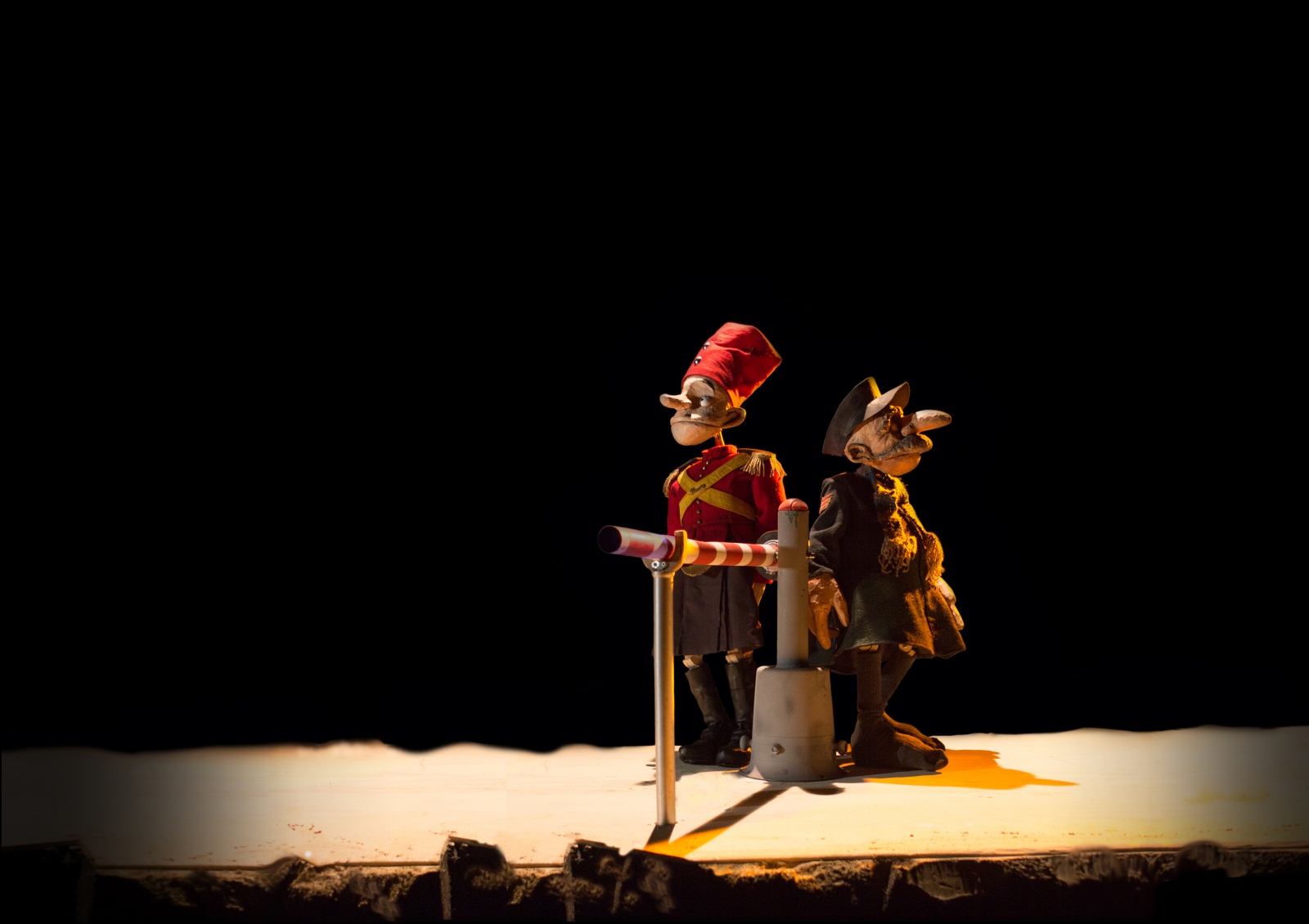 It’s a curious thing, a national border: an invisible line in the dirt, its position determined by politicians you’ve never met. On your side is a world you understand – you know the laws and the people. But cross that border, a matter of a single step, and you become a stranger in a strange land. Would it even be possible if you were to meet another person to somehow get past the nationalism, the red tape… and treat them simply as a fellow human being?

This is the question asked at the beginning of Green Ginger’s ‘Outpost’, an ambitious puppet play. From its opening moments, it impresses. The set, the lighting, the music are all marvelously done. The setting is poetically simple: an isolated national border crossing between the nations of Grud and Escopia. Much is learned from what we see. The Escopian building is modern and brutal, a butcher’s knife of glass and steel, thrust from the sands. Grud’s HQ is, by comparison, a humbler affair: old fashioned, gently crumbling, yet somehow infinitely homelier. Our two main characters are brilliantly visual creatures. There’s the Escopian Luis, a young and dapper man in a new, bright red uniform. BK, the man from Grud, is a squat, older fellow whose lips move slowly beneath a bloated caterpillar of a grey moustache. In the hands of Green Ginger’s puppeteers, these two figures come to life, with Luis marching stiff-backed across the sands, and BK curling up indoors like a fat cat on a lazy Sunday. They are supposed to be enemies, but as BK points out: “it’s just the two of us out here.” How does one, for example, negotiate the use of the outpost’s single toilet? Is an international committee required?

The first third of the play is a steady and charming study of these two men. We learn about them as they learn about each other; the character work is good, amusing stuff. Then, abruptly, things change: a third character is introduced who is gratingly villainous, and the setting shifts to a more fantastical place. The villain and her impact on the play cannot be overstated – she commandeers the show, transforming it from a study about two odd persons in a very odd setting to a disappointingly familiar tale of Good vs. Evil. This is a shame. The play starts off in a far more interesting, far funnier place than where it ends up. Happily the quality of the puppetry is maintained throughout, so there is much to see and wonder at. The choreography deserves special mention. Complicated scene changes and the presence of multiple characters never hinder the expert work of the puppeteers.

‘Outpost’ feels like two different shows. One is adult and full of intriguing ambiguity. The other is predictable in its tale of “let’s beat the bad guy!” and ultimately a letdown. Despite that, there’s still much to recommend ‘Outpost’  – it’s a beautiful show with some marvelous puppets, performed with great expertise and enthusiasm.

"'Outpost’ feels like two different shows. One is adult and full of intriguing ambiguity. The other is predictable in its tale of “let’s beat the bad guy!” and ultimately a letdown. Despite that, there’s still much to recommend ‘Outpost’  – it’s a beautiful show with some marvelous puppets, performed with great expertise and enthusiasm."

We watched 'Outpost' during the 2015 Suspense Festival in London.