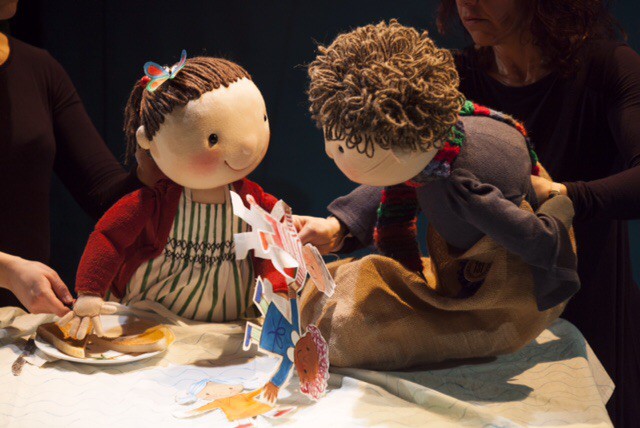 A Little Angel Theatre and Polka Theatre co-production, ‘The Paper Dolls’ by Julia Donaldson and Rebecca Cobb is the gentle story of a little girl called Rosie who makes five interlinked paper dolls with her mother. As Rosie plays with the dolls they encounter dinosaurs, crocodiles and tigers. It is a lovely walk through a child’s imaginative world and simultaneously plays on adult nostalgia, and how games and play are passed from generation to generation. Animating a string of paper dolls is perhaps a first foray into puppetry for many children.

In Peter Glanville’s production the essence of the book is faithfully captured both visually and in tone. Lindie Wright’s set and puppets, including the cheerful, plump toddler Rosie and the storybook animals, are vivid and satisfyingly solid. The dining room table desert-island and crocodile (straight out of Punch and Judy) are particularly memorable and create the scariest moment for the pre-school audience. The delicious vignette of white mice playing in the long grass and Rosie holding a ladybird in her hand are also beautifully handled. This is simple, unhurried storytelling that captures the imaginations of the whole audience.

The two cast members, Andrea Sadler (Mum) and Jane Cranshaw (Rosie) communicate with ease to a very relaxed and attentive audience. The detailed animation of Rosie brings her into genuine and delightful communication with her stage Mum. The two actors work seamlessly to bring this deceptively simple show to life. My four year old son wanted the "lovely ladies" both to come home with him.

The character of Rosie’s brother Tommy is rather slim in with Rosie and Mum. In the book he is just a boy rather than a sibling, and this perhaps sits easier with the reader, as he is unremittingly bad. In this re-telling he seems ostracised from the close mother-daughter relationship. The shock of the wilful destruction of his sister’s paper dolls is surprisingly vicious. As in the book he says, “You’re gone forever.”

My son persistently questioned me about this incident on the way home and wondered why Tommy did it? Unlike in the book, we don’t see the dolls reforming and flying into the little girl’s memory and so for the small children they really are gone. This part of the show appeals to adults (as the destroyed dolls become shadows and voices in the ether) but it's incomprehensible to the younger children. The subsequent world of Rosie’s memory is disappointingly two-dimensional and not the magical place that is evoked in the book.

These are small complaints as this was a delightful and refreshing show that trusted in the simplest of means to attach to the imagination of its young audience. On the afternoon I saw the show the children and adults were held in thrall from start to finish.

"This is simple, unhurried storytelling that captures the imaginations of the whole audience."

We watched this performance at the Little Angel Theatre, London, where it plays until 28 June 2015.