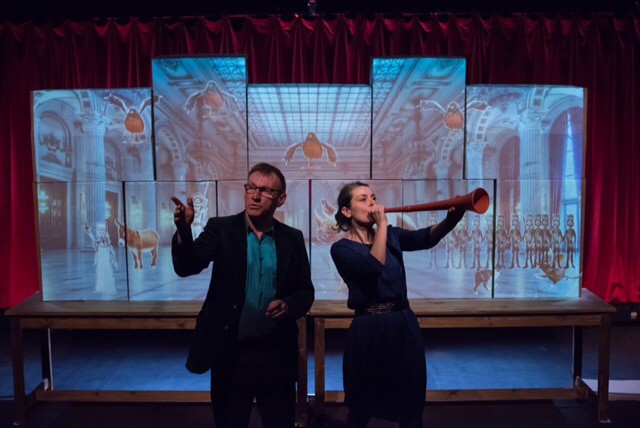 Two actors, a few sheets of cardboard, some simple projections and a table full of potential sound effects are all Forced Entertainment need to concoct an amusing story for children. 'The Possible Impossible House' is the company's first production for youngsters. It's pared back and minimalist, relying on the ability of our storytellers to engage us, rather than sparkling visuals.

One actor plays the lead storyteller, standing behind a long table and catching projected images on large sheets of brown card. The other actor sits at a different table, one loaded with objects including a keyboard, several wine glasses, two packs of dried peas and some stalks of celery. This actor is charged with creating strange music and evocative sound effects for the unfolding story. The actors are on rotation from the company and could be different each time; we watch Richard Lowden and Cathy Naden.

As we move about the possible impossible house, we meet a doodle of a girl and agree to help her hunt for a missing spider, meeting a mouse, some soldiers, a flock of angry birds and even a rhino along the way. Surprisingly it is the interaction between the two actors as they come up with the story – rather than the tale itself – that is the highlight of the performance. Cathy, who creates the sound effects, is genuinely funny in her eagerness and imaginative search for the right sound. Richard's gentle exasperation with her is strictly jovial and the two riff of each other beautifully.

While watching them work together is lots of fun, the story and the way it is illustrated just isn't that exciting. I find myself wishing for more from both, especially the visuals, something more dynamic and playful. The images projected onto the sheets of cardboard held by Richard are mainly static photographs, sprinkled with a few scratchily hand-drawn characters that are animated in a very simplistic, naive kind of way. It is only right at the very end that a stack of cardboard boxes is used to create something more visually interesting. While I'm more than happy to spend an hour in Richard and Cathy's company, I leave feeling that neither the plot nor the projections quite reflect what a 'possible impossible house' could surely be.

"Two actors, a few sheets of cardboard, some simple projections and a table full of potential sound effects are all Forced Entertainment need to concoct an amusing story for children."

We watched 'The Possible Impossible House' at the Barbican, London, where it plays until 28 December 2014.