The Prophetic Visions of Bethany Lewis 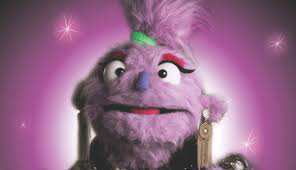 The protagonist, Bethany Lewis, is a purple fluffy muppet-style lip-synch puppet. She is an ordinary working-class mother of two surrounded by her loyal husband Gary (the blue puppet) and Jade a successful taxidermist (the green puppet). They look sweet but of course their mouths are filthy.

The story starts when Bethany suddenly becomes psychic and able to foresee the future after being hit on the head by a tin of beans. Her ability is broadcast on social media and she gains instant fame. Now she’s on TV with celebrity friends and people begin to queue outside her house longing for her prophecies which come true. Her reputation reaches the government and the Prime Minister Mr Johnsonson (a Boris Johnson-like muppet). He is not at all happy as Bethany predicts a future society that is fair and just, the poor being fed and the NHS being saved. After several attempts to stop her, Mr Johnsonson taking orders from his master (a pig puppet) and they plot to frame Bethany as a witch by using the media and bringing back ancient witch laws – leading us to a literal witch-hunt.

The Prophetic Visions of Bethany Lewis can be best described as Avenue Q meets Spitting Image but the puppetry isn’t quite up to the standard of these comparisons. Bethany’s character is likeable but her lip-synching lacked accuracy. Sometimes the puppeteers’ faces were so prominent that my eyes were drawn away from the puppets. However the puppets were well designed and beautifully made. The police puppets were a notable highlight for me, made from plastic fly swatters with eyes.

The story touched on the today’s celebrity obsession and how truth can be abused and mistreated as ‘fake news’. It had plenty of genuinely funny moments (who doesn't like puppets swearing?) and the few moments of stillness were great. The show ends with an amusing Muppet show-style puppet song and dance - but it felt a little forced and unnecessary.

Having said that, most of the audience were thoroughly enjoying themselves. This is an entertaining hour and if you have never seen filthy-mouthed puppets mocking politicians, then it might just hit the spot.

'The police puppets were a notable highlight for me, made from plastic fly swatters with eyes.' Aya Nakamura