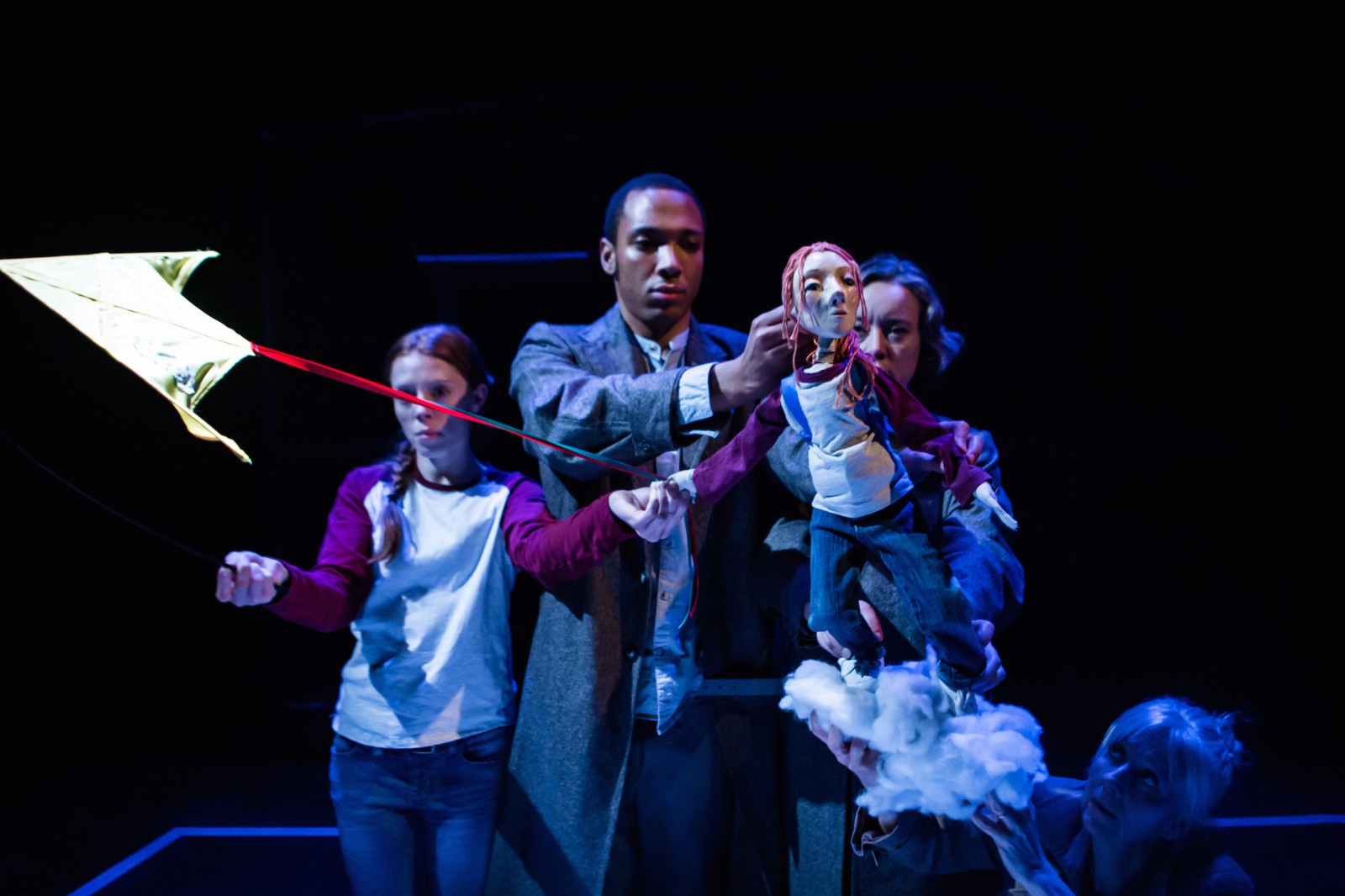 Upon seeing the two boxes labeled “Mum’s things” and the unusual set/props spread about the space in Soho Theatre, I didn’t know what to expect: was this a children’s show? A puppet show? The audience kept rearranging itself to try to fit everyone in seats for the sold-out Thursday night performance of Kite by The Wrong Crowd.

The lights went down and the performers walked in. The audience was greeted by a soundtrack that would powerfully accompany the story all the way through: encompassing effects as well as music to aid the wordless storytelling. A girl (whose age I could never really determine) moves in to live with her grandma after her mum passes away. Two grey-cloaked figures appear to help her come to terms with the harsh reality she is facing. These spirits, reminiscent of the Men in Grey from Momo by Michael Ende, want to help her. Through their control of the weather and certain objects, they incite the girl into flying a kite that will take her on an adventure over London.

The slightly exaggerated performance register serves the storytelling well, and it is refreshing to see puppeteers who are able to emote. They were characters in themselves, and related to the other characters as well as the objects they are manipulating, always accurately keeping the focus of the audience on the objects when necessary. This effectively made the magical elements of the story more believable.

Using puppets to create a change of scale, the audience is whisked away to fly over London. The Wrong Crowd use effective devices to change their deceptively simple set from a home to a city and from life-scale to miniature, allowing us to traverse emotional and physical distances with the characters. The characters join the spirits in manipulating the puppets, creating beautiful images, although raising slight confusion as to what the rules are in this world in terms of who is able to manipulate what.

The puppets are quite beautiful. The puppet of the grandma is particularly endearing. Although the image of the girl puppet flying could have been enhanced by a better articulated puppet, overall, Kite succeeds to tell a story with a level of complexity that is appealing to both young and old. It makes it possible to think magic is real and something might lift our spirits even in the harshest circumstances. It makes me think this is “the right crowd” to keep an eye-out for.

Ana: 'Using puppets to create a change of scale, the audience is whisked away to fly over London.'

Kite is on at the Soho Theatre as part of the London International Mime Festival until the 6th February. There is a matinee and evening perfomance on Saturday 6th.