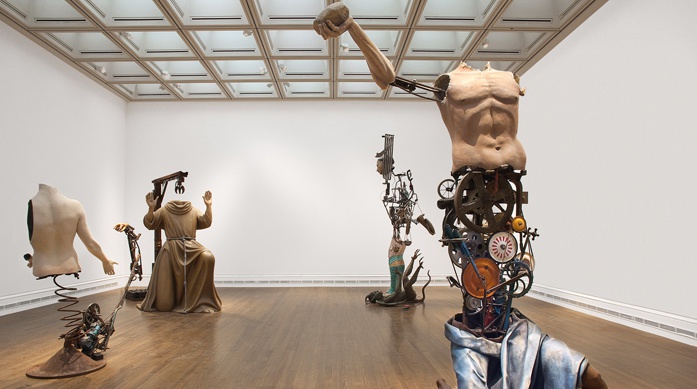 By slotting a coin into a box, you can make St. Francis bang his head against a small effigy of crucifixion. With some elbow grease, you can turn a broken wheel of St. Catherine. The colourful and amusing automatons are accompanied by collages and drawings that Landy created during his three year residency. A film that documents his process, and features interviews with Landy and curator Colin Wiggins, is unmissable.

Considering that previous associates of the National Gallery have been painters and sculptors, it was a radical decision to bring in Landy, who is better known for his destructive arts. For his installation work ‘Break Down’ (2001), he catalogued every single possession he owned and then destroyed all but the clothes he was wearing over two weeks. He built a giant ‘Art Bin’ (2010) at the South London Gallery, into which artists including Damien Hirst and Tracey Emin dumped their unsatisfactory works that could have fetched thousands of pounds in the art market. Through acts of destruction, he questions the value of things and arts.

The exhibition leaflet gives information about the paintings that inspired Landy, together with the rooms where they are located. These paintings are relatively unknown compared to National Gallery favourites by Picasso, Degas and van Gogh. They are no less masterful. In them it’s hard to find a trace of violence on the saints’ impeccable skin. They pose with the tools that tortured them in elaborate frames, icons of Christian Art.

In contrast, Landy’s sculptures are made of rusty and junky spare parts and found objects. Their movements are clunky with loud mechanic noises. When I visit, two are out of action and one only partially working. It seems martyrdom is taking its toll on their bodies. Unlike the original paintings, there are dents, scratches and cracks on the kinetic saints’ bodies like the live body after violence. The objects are animated not only by the mechanics that makes them move but also by the embodiment of pain and suffering. As in Landy’s previous works, destruction brings his arts alive. That said, this exhibition is guaranteed to make you smile and children will love it too.

The exhibition is open until 24 November 2013 and admission is free.