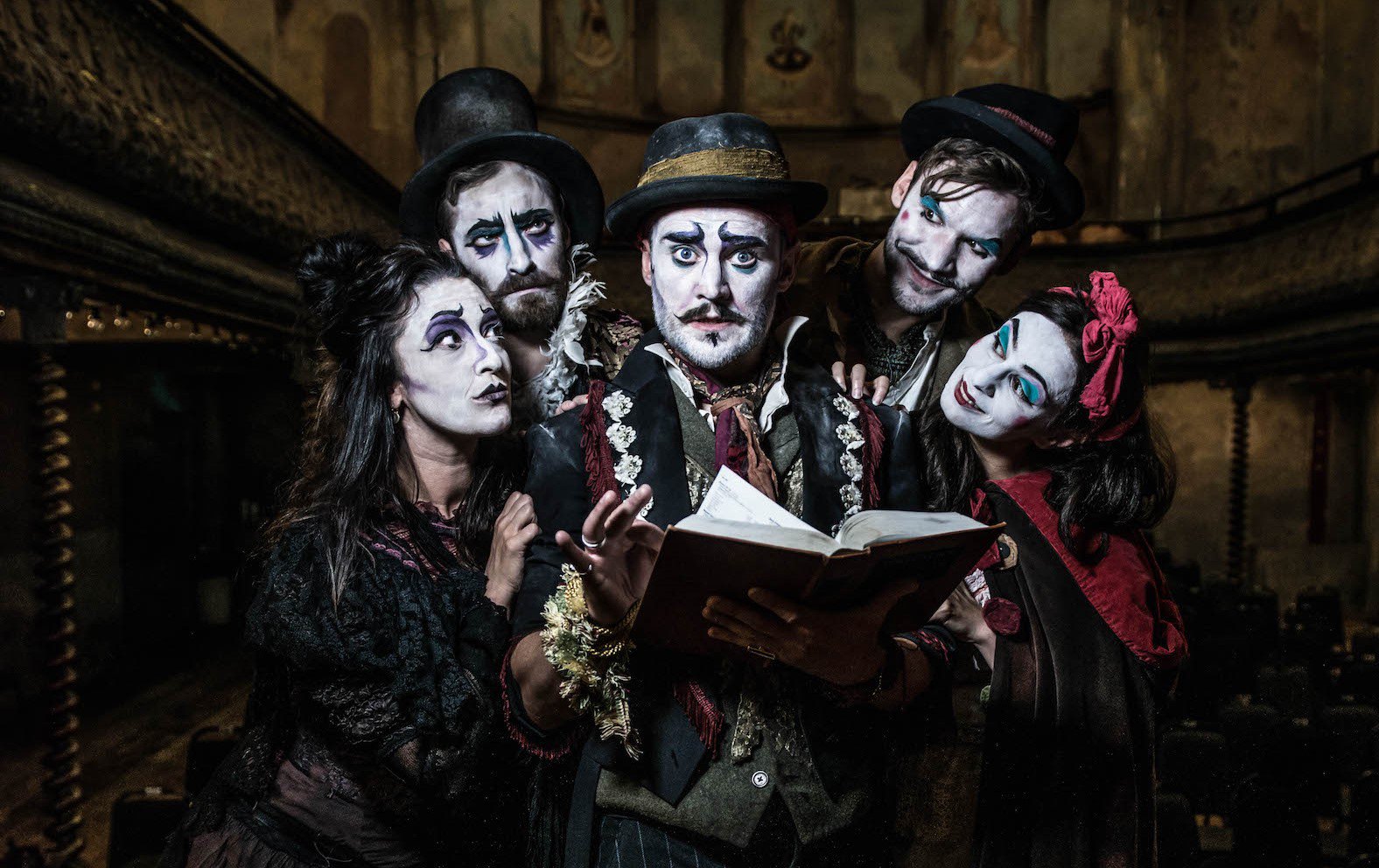 The Terrible Infants is a show presented by the company called Les Enfants Terribles. It’s always a pleasure to be in Wilton’s Music Hall where the atmosphere of Victorian theatricality recalled was ideally suited to this production. Five top-notch performers, each one a musician, a singer, a puppeteer and a strong-voiced actor, each one colourfully dressed and heavily made up, gave the show tremendous energy. They played a series of stories in verse and song, each with a grisly moral tale of punishment and retribution for the wrongdoings of children, who were mostly represented by grotesque puppets and masks.

Music was of course an essential element which I especially enjoyed. It was composed by Tomas Gisby and Neil Townsend and was most pleasingly integrated with the humour and vitality of the action, as was the set design by Samuel Wyer.

The Terrible Infants owes its concept and its aesthetic to the book Struwwelpeter, as did Improbable’s Shockheaded Peter, (and the first poem about ‘Tilly’ was a bow to Hilaire Belloc’s ‘Matilda’ who told ‘such dreadful lies’), but I daresay both would be proud of their progeny, as the show was so exceedingly well executed in all departments, except for one or two of the puppets which might have benefited from a less violent approach!

Horrifically humorous vignettes, such as the fishy 'Tail' of young Finbar, a boy who yearned for the life aquatic, is an example of the troupe’s inventive yet precise presentation which came into play as Finbar's fate unfolded. The roof of a caravan became a boat, an upside-down rubbish bin became Finbar's gruesome father. By the seashore a surprised Mermaid, combing her impossibly long hair, is asked to grant Finbar's wish to become half human, half fish. Instead she cruelly transforms him into a monstrosity with an outsize fish head and the protruding legs of a little boy. In this case the moral is ‘Be careful what you wish for’.

Even the Thursday matinée was well attended at Wilton’s Music Hall with some audience members flamboyantly dressed as though part of a 19th century crowd (hardly a child to be seen). I expect it to have a long run, in London and on tour. The five performing company members were Oliver Lansley (co-director), Rebecca Bainbridge, Richard Booth, Serena Manteghi, and Christo Squier. James Seager is the other director.