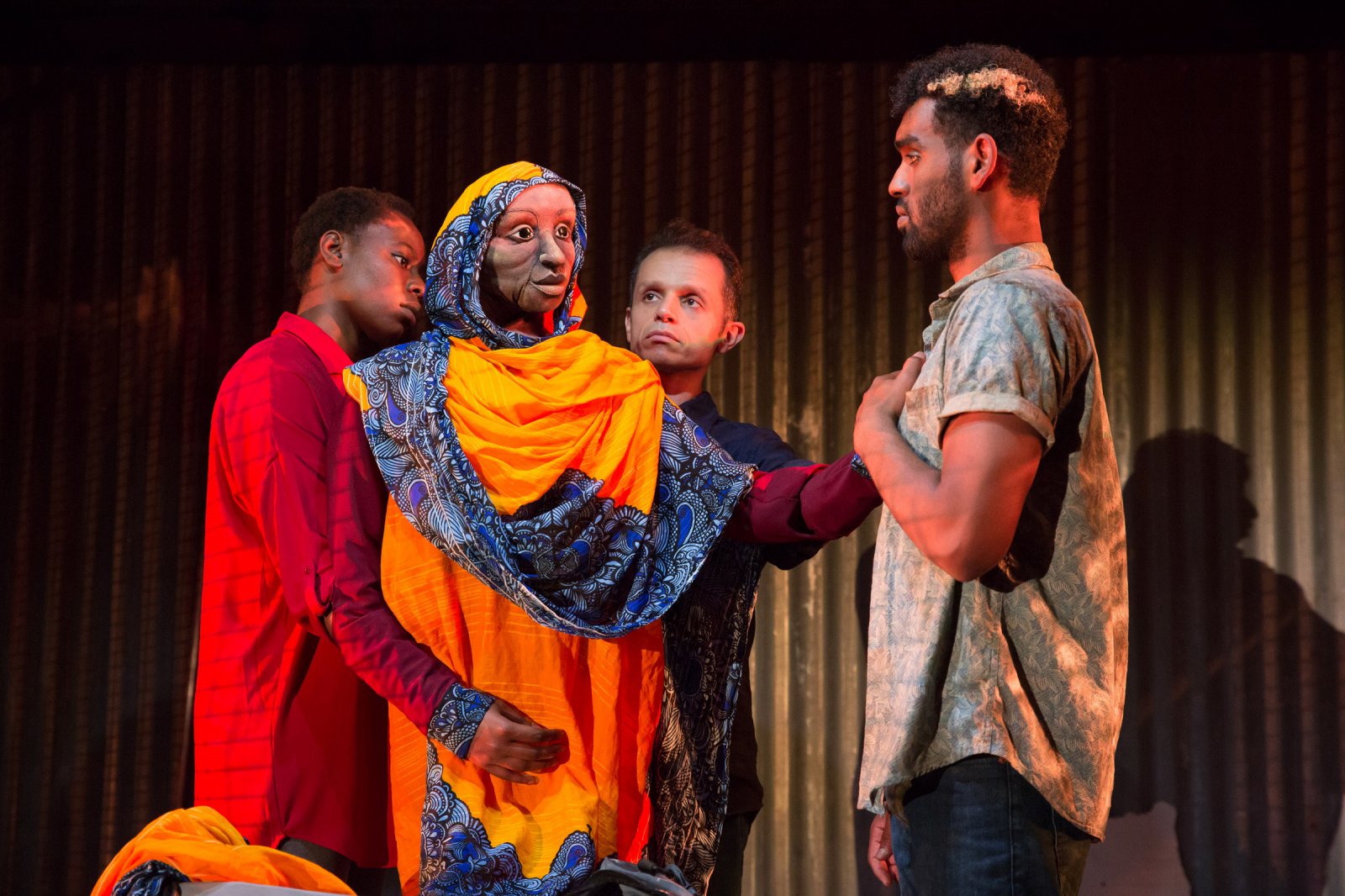 As an audience we're treated gently. On arrival we're individually welcomed and given advice too – that its a good idea to use the loos ('a 90 minute performance') and maybe we should also consider drinking some water ('the spaces are very hot today'). Then, when we finally gather together, there's yet another welcome, telling us about all sorts of things such as the guidelines as to what to do if we need to leave unexpectedly ('find a steward') and there's also concern, on our behalf, that we'll need to climb stairways between scenes.

This mood of gentle welcoming continues once the piece kicks off. We're introduced to a group of performers – the welcoming party - and they ask us to imagine how we would greet a group of new arrivals. We practice encouraging group cheers, and then we wait for the expected visitors. But nothing happens – disappointingly the only arrival turns out to be yet another helper.

There's a bang, somewhere on the floor above us, and we – stewards, performers,  audience – all set off to find the source of the suspicious noise. We troop upstairs and a search ensues. The audience finds itself gently shepherded around the large space as the welcoming party seek out the intruder.

Eventually a strange packing case is discovered and it's opened, very carefully. Cowering inside is Mohamed who, it turns out, is a refugee from Sudan. Then the performance opens up and, in my favourite section, we briefly meet – in a delightful piece of puppetry - Mohamed's mother before we follow his journey from a war zone. He travels across the desert, then there's a dramatic crossing of the Mediterranean using a boat suspended from an overhead gantry, its cargo those familiar red life-jackets that signifies the rest of its refugee passengers. We next move to another large room where we discover the Calais Jungle camp, where its iconic and horrific images are acted out in a kind of dance. The puppetry elements throughout the show tend to be short but are always beautifully done, and they have the effect of moving us into another reality, one which slows time down and is less mundane, that allow us to briefly consider, in a measured and sometimes profound way, the shocking inhumanity of the situation in which people like Mohamed find themselves.

All of this takes place in the highly atmospheric 1830 Warehouse, part of Manchester's Museum of Science and Industry. Part dusty building site, part empty cargo warehouse. The mysterious, dark and shadowy brick-lined spaces create a perfect backdrop for the stories that gradually unfold. We discover that each of the five members of the welcoming party... have previously been welcomed into the country, and we hear and see short extracts from their own stories.

The performance takes another turn when Mohamed is 'processed' upon his arrival to the UK. Things go wrong almost immediately through simple misunderstandings, such as lack of language skills. Members of the welcoming party find themselves getting involved, and they too are quickly interned by the rigid system. Slowly and inexorably we, the audience, are getting drawn into this insane game by the inflexible and distant bureaucracy. We also  notice that we're spending more and more time grouped together in cages, addressed remotely through loudspeakers, asked to complete forms without adequate guidance or time to complete them.

These final sections were, for me, less successful; in part because they bring us up against a limitation of the promenade form. The audience, so molly-coddled when we entered the theatre, just cannot now be treated as inhumanely as refugee asylum-seekers routinely are. So what we experience is a gentle and light illustration of the genuine horrors that we know exist in reality. Of course we understand this, and we happily go along with it, smiling to one another as we role-play what are in reality, at best, shocking indignities; at worse, cruel, inhumane, criminal actions. The contrast between the gentle and kind way we, the paying audience, were treated when we entered the theatre, and the asylum seekers that we're now being asked to represent, is too vast. Perhaps that's also part of the point that Theatre Rites are making, and if so it's an important one. But for me it's also where the form itself seems close to collapsing under the weight of the idea.

Despite this quibble, The Welcoming Party is a necessary and brave show; welcome in very many ways. It runs for another week as part of Manchester International Festival. It's well worth mentioning that a programme of events on the themes of the show continue throughout August at Z-arts and Pathway Arts in Manchester.