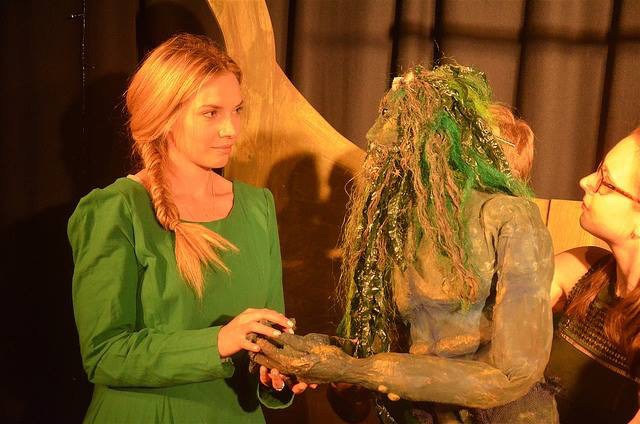 An obscure historical document called the Chronicum Anglicanum makes mention of an astounding incident in the time of Henry II. It claims a fisherman from the port town of Orford dragged in something with his nets that in shape resembled a man, but behaved like an animal and was seemingly able to breath underwater. Dubbed a merman, the creature was tortured in the local church for a while, until it was able to escape back to the ocean. It was never seen again.

This minor historical footnote is the basis for Rust and Stardust's production of 'The Wild Man of Orford'. I can understand why they were drawn to the story: the idea of something utterly inexplicable interrupting the mundane schedules and duties of normal life is irresistible, and many storytellers have tackled some version of it throughout the years (indeed, the Little Angel’s 'A Very Old Man with Enormous Wings' is, superficially at least, more or less the same story). This is a very ambitious project and the Brighton Fringe, where the show is performed, absolutely the right place for it. Unfortunately, a very interesting idea is hampered by a few problems in the execution.

The show is held at the Dukebox theatre, and if I’ve ever been in a smaller theatre then it was probably a TINO (Theatre In Name Only). Your average insurance broker probably has a closet with more space than the cast had onstage. The word is TINY. The cast, including four performers and a musician, were literally falling over each other during the play’s many scene changes. With so little room for the cast, the set was scaled back to basics: a single backdrop of a sailing ship that remained onstage for the entire show (making it seem a bit out of place when the setting switched to, say, a church interior). I should mention however that the show I watched had some technical issues, and a series of projections that would have helped make the show more visually interesting were not fully functional.

Set and effects can be forgiven if the heart of the show, the performance itself, is strong. Despite their tremendous energy and enthusiasm, the performers were sadly hampered again and again by the decision to incorporate a narrator into the proceedings, who literally tells the tale as it unfolds. There are ways of making this work, but here we had many moments when the actors were literally waiting onstage with nothing to do while the narrator told her story. Again and again I was thinking: “Instead of telling us, why not show us? You have all these actors – use them!”

It’s a pity, as there is one scene where the merman puppet (a glass-eyed, hoary old beast) is allowed to simply move, to breathe, to exist onstage without the exposition and tripping and chatter that clutters up much of the rest of the production. In that scene, the performers trust in their own skills as puppeteers and actors and deliver a silent few minutes of true wonder. It’s an indication of where the show could go with a bit more work.

"In that scene, the performers trust in their own skills as puppeteers and actors and deliver a silent few minutes of true wonder."

We watched 'The Wild Man of Orford' at the Dukebox Theatre during the 2015 Brighton Fringe.