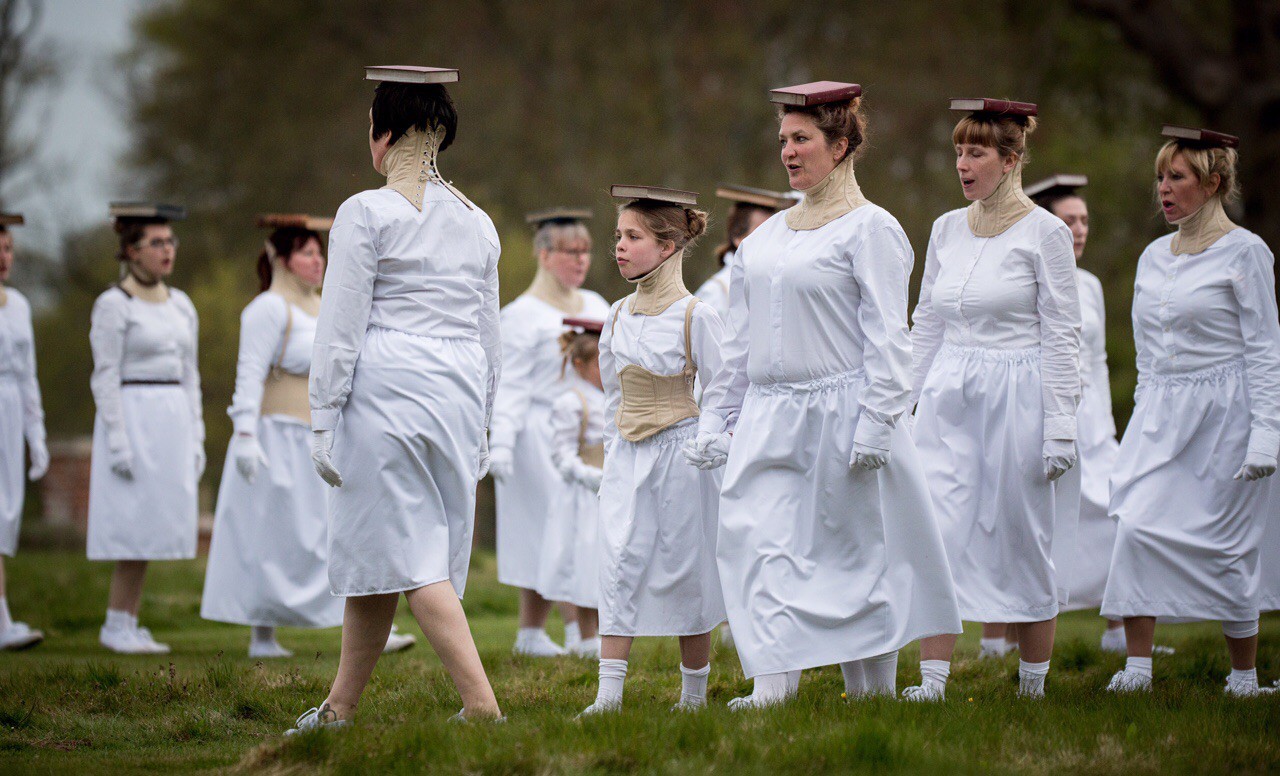 Three years in the making, ‘Wolf’s Child’ by Wild Works is Norfolk & Norwich Festival's flagship production this year, and for good reason. Set in the beautiful grounds of Fellbrigg Hall, and taking inspiration from the ancient Greek myth of Callisto, we follow the story of Rowan, a mute girl raised in an autocratic orphanage who unintentionally becomes a mother and, in turn, a wolf.

Wild Works know how to set a scene. There is a sense of mounting excitement and expectation as the sun dips below the English countryside and, in the distance, darkly clad performers gather around a smouldering fire. There are ragged crows to guide us and, as we follow a leaping skeletal wolf puppet summoned from the smoking embers, I can hear the voices of women drifting on the wind. We are here to be told a story and the crows are our narrators, acting as guides, spies and tree top commentators throughout the performance.

Famous for creating ‘Landscape Theatre’, it is the setting as much as the performance that inspires you and the design concept from Myriddin Wannell is simply excellent. There is a ritualistic, timeless quality to the show, which compliments the 17th century hall's grounds wonderfully. Often things are hidden in plain sight. At one point two shire horses appear and I can’t help but wonder how on earth they were concealed?

The mirrored tree set, which acts as the backdrop for the love scene between Rowan (the excellent Kyla Goodey) and Man Beast (Morgan Val Baker), is enchantingly beautiful and the use of mirrors along with the traverse staging allows no escape for audience or performer.

The introduction of baby Thorn is a beautiful puppet scene, the operation evocative of German puppeteer Ilka Shonbein. The transition from young puppet to grown human woman (passionately acted by Ellie James) increases the tensions between the human/animal world and plants a seed of foreboding in scenes containing the tightly white-corseted orphans overseen by the tyrannical ‘Mother’ (played by Sue Hill). Their existence evokes Margaret Atwood’s ‘Handmaid's Tail’ and the sympathy for the wildish nature inherent in us all is explored through both of the female heroines, who are rejecting this life and embracing their inner nature.

Wild Works director Bill Mitchell wanted to explore the nature of what it is to be wild and worked with animal behaviour expert Dr Chris Seeley and wolf expert Shaun Ellis, who spent years of his life working closely and living with a wolf pack. His eventual need for humanity and normality posed the question, what happens when you don’t walk away?

'Wolf's Child' is truly a unique spectacle and a beguiling accomplishment. I marvel at the company's ability not to rush you as they weave their magic. By the final scene – set in a temple of blue lit trees – the tension between the two opposing forces of nature and man is explosively released in a final showdown. I realise that I have no idea how far I have come within the grounds and, as the show finishes and the torches are lit to guide us only a short distance back to the hall, the enchantment is broken, but not enough to stop many of the audience members tilting their heads up and howling along with the cast.

"'Wolf's Child' is truly a unique spectacle and a beguiling accomplishment. I marvel at the company's ability not to rush you as they weave their magic."

We watched this performance of 'Wolf's Child' at Fellbrigg Hall during this year's Norfolk & Norwich Festival.