Wunderkammer by Figurentheater-Tuebingen at The Barbican Pit 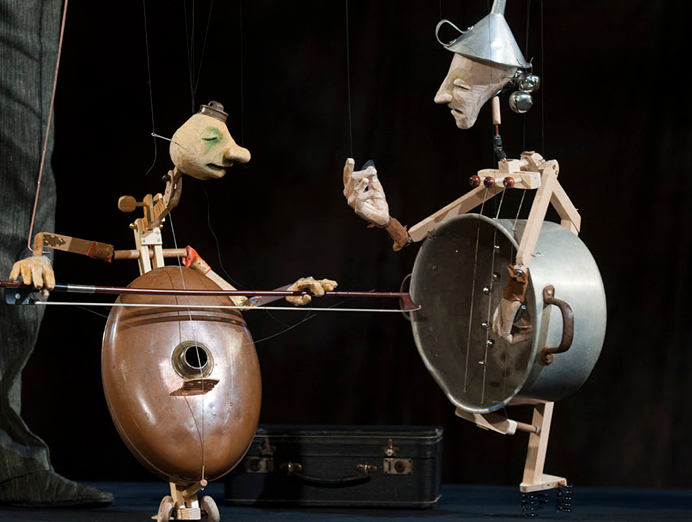 Wunderkammer consists of a series of scenes inspired by the Renaissance concept of the cabinet of curiosities, featuring objects and historical artefacts, many of which remain undefined and unclassified. Within the show we watch this trio of puppeteers de-box and unveil several abstract puppets, which appear to have just escaped Frank Soehnle's Dadaist imagination. With faces as torsos, fingers as wings and parts which are plucked and that ring - each one is entirely a work of art. We are taken to places of laughter and comedy, but also a few moments of self-conscious puppetry, which leaves me at points with a feeling of futility and (just like the puppets) a greater sense of struggle.

We see several types of string puppet in all of the glory of this form. Ranging from simplistic objects which are pulled across the raised stage space, all the way to puppets manipulated with more impressive and complex controls. Some appear more conventional, made from wood and resembling traditional marionettes, whereas others in this collection of puppets begin from materials of fabric, kitchen utensils and even flammable paper.  Alice Therese Gottschalk, Raphael Mürle and Frank Soehnle either puppeteer or interact with the puppet in each scene, offering an honest sense of play throughout the show. This range of puppets truly creates an array of characters throughout Wunderkammer, ones that make us laugh, ones that inspire awe and even those which leap between the puppeteers

The set is simple; around the raised stage exist several containers that are individually unveiled throughout, there is also a large circus-esque draped curtain at the back of the space where the puppets are collected from and appear to retreat back to. Towards the end of the show the performers reveal each of these spaces together which presents a truly spectacular final image. The use of lighting by Christian Glötzner complements  the circus-style of this show. It works particularly well as the focused spot light cast intricate shadows on the curtain from the flexible puppet which bent backwards over itself. This satisfying technique presented many of the puppets as truly three dimensional and alive. Small hand held torches were also effective to highlight and control the audience's gaze at various points throughout the show. Similarly the music in Wunderkammer had a real sense of driving the action as well as truly narrating each puppet's individual character. The 'Wunderkammer' music of Tamar Halperin and Michael Wollny and original compositions by Bradley Kemp were particularly effective in the scene with the kite, and later on as the music slowed and distorted with the yellow abstract puppet.

Within the audience there was a moment of breath during each blackout between the scenes in Wunderkammer. In this space the slate was wiped clean and there was a quite magical and shared acknowledgement that literally anything could happen next. I hope you were as lucky as us to see this show as part of the London International Mime Festival, but even if you didn't, you can join me in checking the Figurentheater Tuebingen website for the chance to see it again.

"An enchanting feast of puppetry entangled with charm and the beginnings of an existential crisis."

The run has now finished at The Barbican Pit, but check their website for further dates and future tours around Europe.