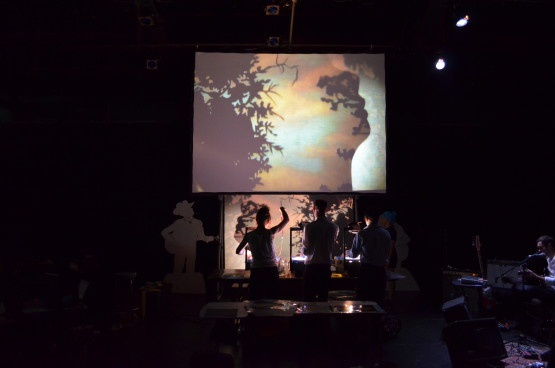 Lula Del Ray follows the story of a teenage girl called Lula who lives an isolated life with her mother in a caravan out in the desert. Her mother spends her time recording wave messages received from space, and Lula is similarly fascinated with the idea of being an astronaut. One day, however, Lula discovers a folk band, and her life becomes dedicated to them instead. After finding out about one of their concerts in town, she escapes to the city and smuggles herself into the concert hall. Lula then discovers where her true passion lies after uncovering secret about the band.
It is a simple coming-of-age story but much of the joy comes from how it is told; with beautifully crafted shadow puppets accompanied by live music. Four puppeteers and four musicians cleverly bring the story to life with the aid of three overhead projectors and two projector screens, the largest of which is hung above the stage creating a cinematic 'big screen' experience for the audience. Two of the puppeteers also transform into shadow characters in the story by wearing silhouette-defining masks.
This show used a range of different visual effects, flipping from wide shots to close-ups, mixing projection with live action. They also created the illusion of cross fading or overlapping by layering the images on the over-head projectors. Overall the visual storytelling was impressive and the tempo was well-paced allowing enough time to appreciate each new image. The story became a little rushed and less clear towards the end - but still left me amazed at how much this company were able to convey without spoken words.
This is one of the best shadow puppetry pieces I have experienced. It’s clear to see they have invested a lot of effort in exploring what shadow puppets can offer, and their technique and belief has certainly paid off. This innovative, cinematic piece has a delightful handcrafted quality. We were even invited to see the puppets up close after the show which helps appreciate the skill, craft and beauty of these puppets.
Aya Nakamura

From the company that brought you Ada/Ava (total sell-out Edinburgh 2016), hit of the Fringe and critically acclaimed Manual Cinema return with their follow up, Lula del Ray. Told through a live-collage mix of shadow puppets and actors with live music, this show is a mythic reinvention of the classic coming of age story. New York Times Critics' Pick 2017. A ‘spectral parade of fantastical images’ (New York Times). 'Incredibly ingenious and utterly unusual: Manual Cinema has invented a new genre' (Daily, Adelaide). 'Full of loving detail, skill and ingenuity' (Guardian).