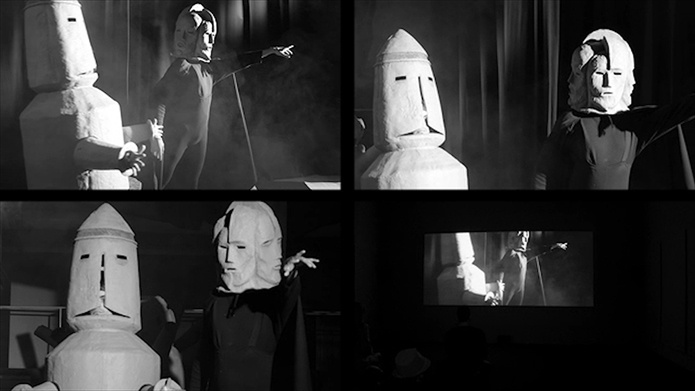 A unique show, Marcel Dzama’s ‘Puppets, Pawns, and Prophets’ boasts a near unhealthy obsession with chess, played out through dance, mask, sculpture and paint. On entering the David Zwirner gallery, observers are greeted by framed paintings in muted tones, some of which have a kind of Mel Brooks feel about them, with uniformed military characters grinning alongside circus performers and masked dancers.

When you venture further into the gallery you realise these oddly theatrical paintings hold a visual connection to Dzama’s work in film, as a number of his drawn characters are reminiscent of those found in ‘Sister Squares’ – a short black and white film with full body costumes and masks that explores a game of chess as a battleground.

The screen is split into four, with a Mexican mariachi band in one quarter playing a traditional soundtrack. The other corners of the screen respectively show shots of two men playing the chess game itself; the antics of the chess pieces, as represented in giant form by costumed ballet dancers; and an audience of robed observers in white masks, who shake rattles as they watch the game unfold.

These robed men are the most expressive characters in the film as, although the facial features on their masks are static, they make synchronised movements such as raising their hands to their brows, giving a kind of Mexican wave response to pivotal moments in the chess game.

The dancers perform across a chequered floor in monochrome outfits, their faces obscured. Their costumes include body suits with giant polka dots but large papier-mâché shapes and full head coverings are the focal point, as each chess piece is represented in exaggerated form.

Dzama’s efforts to consign the game to a theatrical realm is like an extended kind of object theatre, as the artist brings each chess piece to life for the viewer. Costumes include giant queens with triangular heads, outstretched, pointed arms and skirts composed of large, overlapping petal-like shapes. As the anonymous dancers twirl and leap across the space, successful chess moves mean each defeated piece must be disposed of. Before dying, one of the chess characters still finds time to do the splits, adding to the dramatic nature of the piece, though it is hard not to giggle at some of these more outlandish moments.

Upstairs, paper collages similar to Dzama’s paintings, alongside metal sculptures based on the heads of his chess piece dancers, are on view. No matter how extensive your knowledge of chess, it is unlikely to help with your understanding of this whacky collection. Overall, this is a varied show with comic elements, whether intentional or not.

"Dzama’s efforts to consign the game to a theatrical realm is like an extended kind of object theatre, as the artist brings each chess piece to life for the viewer. Costumes include giant queens with triangular heads, outstretched, pointed arms and skirts composed of large, overlapping petal-like shapes."